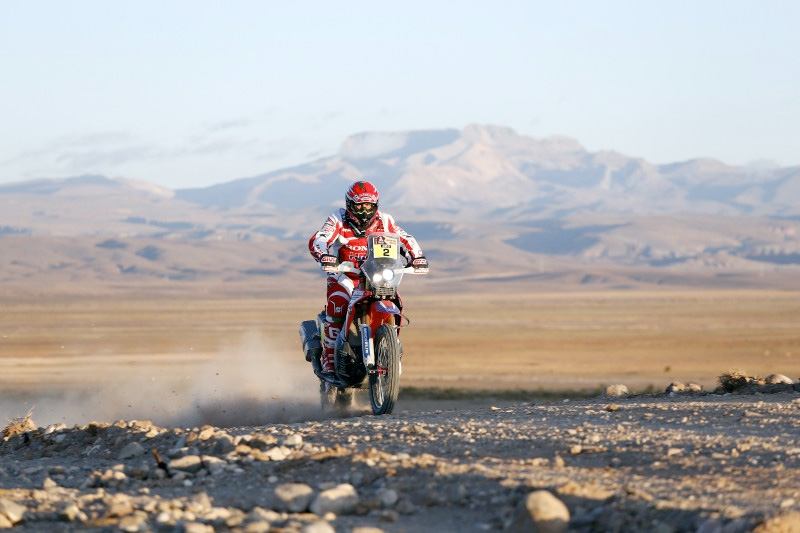 Team HRC's factory rider Paulo Goncalves arrived at the rest day of the Rally Dakar 2016 flying high, at the top of the general standings with Australia's Toby Price in second position aboard his Factory Redbull KTM.

The sunlight in Salta on the Dakar‰Ûªs day-off is somewhat deceiving given the rotten meteorological conditions that have blighted the first week of this years big race.

Heavy storms and torrential rain severely hampered the race organizer‰Ûªs plans, who had hoped for a more trouble-free first week without the inclement weather, which led to cancellations and changes. As far as everything else went, it was business as usual in a week of full-tilt special stages, fairly painless navigation and headache-inducing Bolivian altitudes putting a damper on rider performances.

Race leader GonÌ¤alves has so far clinched one stage victory, a runner-up position and two third-place finishes before yesterday‰Ûªs arrival in Salta. Paulo will be looking to maintain the kind of consistency and effort that have earned him the current top-spot, as the second week assault gets underway tomorrow, with the final race destination in Rosario, Argentina next weekend.

"At the start of the special, I stopped to help Matthias Walkner, who had taken a tumble, and I stayed with him until Pablo Quintanilla got there." Goncalves explained of the situation the unfolded in front of him during stage 7.

"The first part of the stage featured some navigation, but then the profile was a bit like two days ago, with lots of rÌ_os. In the second special, after the neutralised sector, it was raining cats and dogs, I was almost scared, it was almost snow. The weather cleared up a bit towards the end. I'm rather pleased with today's stage, and even this week.

"If I can repeat this in the second weeks, I'll certainly be very pleased, but I think the stages will be very different, so we'll see."
For Price it has been a great first week showing that his third place result in his maiden Dakar in 2015 was no fluke.

After winning exactly half of the opening weeks competitive stages after stage one was cancelled, the current Australian Off-Road Champion sits just 3 minutes and 12 seconds behind Goncalves heading into stage 8 when it kicks off in just a few hours time.

Knowing there is still a long way to go in this years race, Price is in good shape to challenge for the outright win come next weekend.

"I've led the race for the last two days. I won yesterday, but I don't know exactly how high I finished today because riders who stopped to help Matthias will get the lost time back." Price commented after yesterday's 7th stage.

"It's great to keep an eye out for others. Anyway, I'm happy with my performance today. There were Australian flags at the finish of the special. It's nice to get support when you're racing so far from home.

"You must never drop your guard, it's the best way to make mistakes. I'm happy with the work we've done so far.

"It's far from over, a mechanical or a navigational mistake can destroy everything. My aim is to finish the race and get a podium spot. We'll see... We had a good first week, no significant mistakes. Our objective was to get to the rest day in a good position."

Sitting in third position just over six minutes behind Price is Slovakian rider Stefan Svito who has been a sensation throughout the first week of the race, keeping the pre race favourites well and truly in his sights.

Pablo Quintanilla leads the way for the new look Rockstar Husqvarna Factory effort, 18 minutes behind the race leader and is followed by Argentina's Kevin Benavides.

Stage 7 winner, Antoine Meo holds down sixth aboard his Redbull Factory KTM, five minutes ahead of the leading Yamaha rider in Helder Rodrigues, with Spains Gerand Farres in 8th.

Alain Duclos and Joan Pedero have ensured there are no less than five manufactures inside the top ten with the two Sherco Factory racers holding down 9th and 10th position respectivley.

Stage 8 between Salta and BelÌ©n will see riders cover a total of 766km including a 393km timed special test.