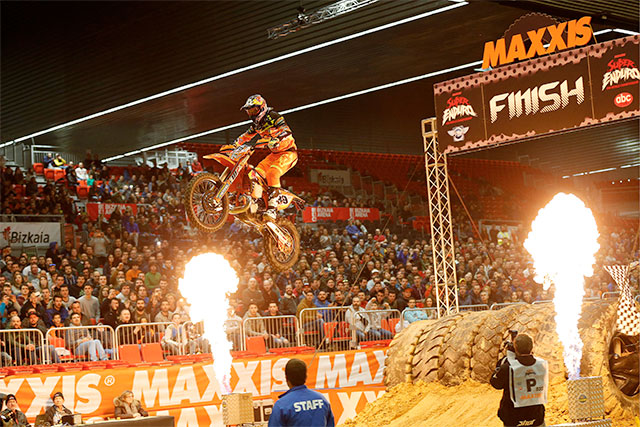 The third and penultimate round of the 2017 FIM SuperEnduro World Championship in Bilbao, Spain ended on a high for Red Bull KTM‰Ûªs Alfredo Gomez as the Spaniard wrapped up his first ever overall SuperEnduro win.

Posting impressive results since the start of the series, Gomez did everything right in Bilbao to claim a well-deserved career first win and close to within 11 points of series leader Colton Haaker.

After a hectic night of racing Gomez was joined on the podium by teammate Jonny Walker in second and Husqvarna‰Ûªs Colton Haaker third. 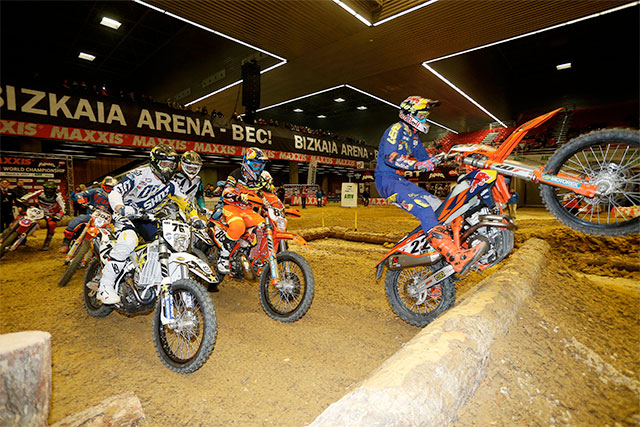 Jonny Walker (22) finished second. Photo: Future7Media
With the gate dropping on the opening Prestige race, the action quickly heated up. Walker, Gomez and Haaker were all in close contention with each rider sharing the lead at least once. Mistakes dropped Haaker back to an eventual third as Walker and Gomez went at it for the win. Gomez attacked at every opportunity but Walker ‰ÛÓ yet to win a heat race this season ‰ÛÓ was not going to let this one slip away. Hanging it out just that little bit more, he hung on to claim his first win of the 2017 series with Gomez second.

With the starting order reversed for race two it was Husqvarna‰Ûªs Pascal Rauchenecker who led the opening lap, but Gomez had carved his way to the front and quickly took over. It was a lead he wouldn‰Ûªt relinquish. This time around Haaker rode it home for a steady second. The fight for third went down to the final corner between Walker and Mario Roman (S-Sherco) with Roman snatching it in the final metres, pushing Walker back to fourth.

With everything to play for in the final race, victory for either Walker or Gomez would mean the overall victory too. Both riders shot out to the front immediately as mistakes dropped Haaker out of play with the duo in third. Neck-and-neck the KTM riders fought for victory only for Gomez to finally come good in the end. 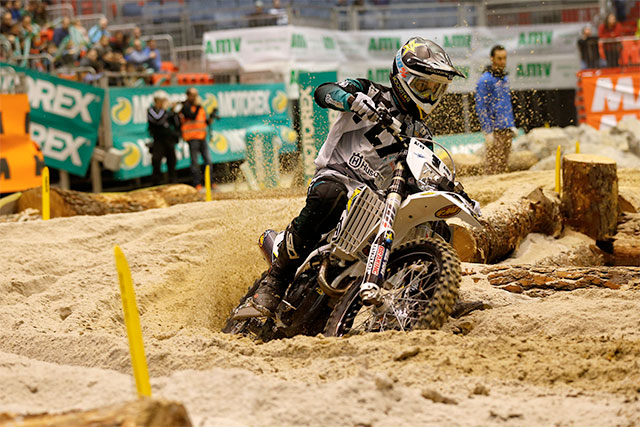 Rockstar Energy Husqvarna's Colton Haaker was third but still holds an 11 point lead heading into the final round. Photo: Futre7Media
Ending his night without a race win, Haaker still finished on the podium in third and maintains the overall point‰Ûªs lead heading to the season finale in Albi, France on March 18th.

"It was a bit of a rough night for me," Haaker said. "I did my best to salvage what I could but it certainly didn't go the way I hoped it would. It‰Ûªs hard to say exactly why things didn't go so well for me ‰ÛÒ I‰Ûªm normally fine on a more trials like track like this one. But third at the end of a not so great night isn't too bad at all. I‰Ûªm still leading the championship with one round to go. I‰Ûªll work hard during the next two weeks and be ready for the final in France.‰Û