Gold for Geerts, Hofer and Vorobyov at World Motocross Championships 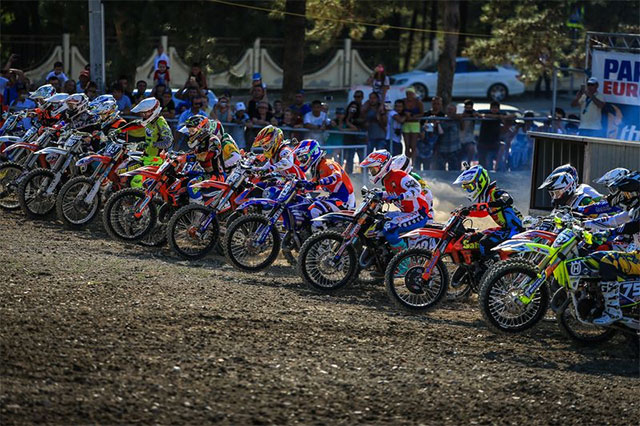 The stars of tomorrow went bar-to-bar for world championship glory in Orlyonok, Russia for the 2016 FIM Junior Motocross World Championships and the European Open 65cc Cup.

The track had already taken a hammering from the extreme weather conditions over the days prior; therefore it was pretty dry in areas with jagged holes popping up left, right and center. It was all about line choice thereafter, which was an extra challenge for the talented kids that ventured out, where Jago Geerts, Rene Hofer and Kirill Vorobyov were the gold medalists in their respective classes.

At the end of the weekend Team Australia won the team event ahead of The Netherlands and Russia while Team Latvia won the FIM Ride Green Cup. 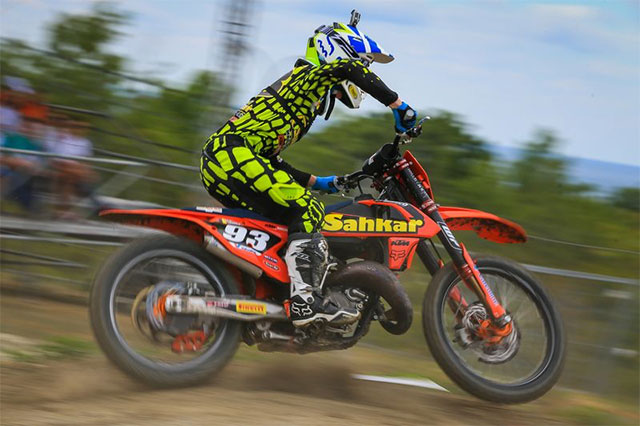 Belgian Jago Geerts took out the 125cc World Championship with a second in moto 1 and a win in the second.
It would appear that the top qualifier Roan van de Moosdijk entered this weekend with every facet of his life in order. The Dutchman was untouchable as he topped the charts in every practice session and went pole in the sweltering hot heat yesterday. In Race 1, the DP19 Yamaha rider chased Czech Republic‰Ûªs Jakub Teresak around turn one with Australian Riley Dukes in tow.

The duo, Van de Moosdijk and Teresak launched the enormous step down side by side, while Dukes rolled it. It was the Dutchman who had the advantage, since he was on the inside of Teresak heading into the following turn. It doesn‰Ûªt take much to figure out, he got the job done and ran away with the lead.

Jago Geerts dominated the last two rounds of the European Championship in Belgium and Switzerland before flying out here to Russia for what is perhaps the most prestigious youth event of the year. The Belgian has been firing on all cylinders and looked like he was off to a good start at gate drop today before getting boxed at turn one. It didn‰Ûªt take long for him to barge his way through the pack. He was third by the end of lap two and looking for smooth lines. 15 minutes in, he found his rhythm and set the fastest lap of the race, before blitzing past the Czech talent like he was standing still.

Latvia‰Ûªs Rainers Zuks made his presence recognized with a killer holeshot in the second race ahead of the two main protagonists, Geerts and Van de Moosdijk. With Van de Moosdijk running a strong pace this weekend, Geerts knew he had no time to waste if he wanted a shot at the crown, and by the end of the opening lap, he was in the lead.

While it‰Ûªs good to start up front, it wasn‰Ûªt so smooth sailing for the Belgian as Van de Moosdijk didn‰Ûªt mess about either, and he was just as quick in second. As Geerts very very slowly inched away, Van de Moosdijk did all he could to stay within striking distance. Meanwhile, behind them a bunch of Aussie‰Ûªs and a token Czech guy were having a savage race for third.

Australia‰Ûªs Riley Dukes after getting off to yet another ripping start, he ran third for the majority of the race. On the final lap, Teresak, who had sacked off the other two Ozzie‰Ûªs, managed to put the move on Dukes for third.

Geerts got what he wanted, and what he needed, a race win for the overall victory and his first ever world title. It must have left Van de Moosdijk with a bitter sweet taste in his mouth having ridden so well all weekend long, and to be nudged back to second place despite having the same points as the winner, 47. Teresak finished third in the final race for third overall while the Australian‰Ûªs Dukes and Grothues rounded out the top five in that order. 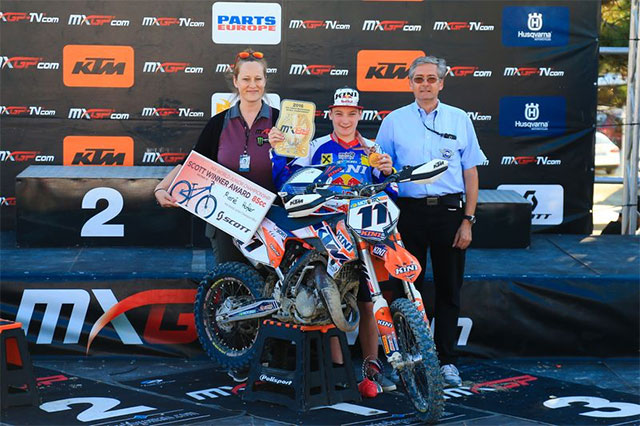 Rene Hofer is the 2016 85cc junior world champion.
The rookie, and former European Open 65cc Champion, Kay Karrsemakers, was lightning quick off the line and took a super sweet holeshot before coming up short on the first tabletop and being nudged back to third by Japan‰Ûªs Joe Shimoda and Estonia‰Ûªs Meico Vettik.

The Japanese star, who funnily enough rides a European brand bike, KTM, was feeling it out here in Russia as he pulled a gap right away. While Shimoda was relishing his time out front, complete with some serious leg swag over the jumps, Meico Vettik, Maksim Kraev and Rene Hofer tried to catch him.

It only took two laps for the poleman, and recently crowned European EMX85 Champion, Rene Hofer to check in for work, and he wasted no time in putting Vettik and Kraev out of business.

In Japan, kids only race one moto a day, and that race is only 10 minutes plus 1 lap long, so it wasn‰Ûªt extremely unusual to see Shimoda eventually fade, although it wasn‰Ûªt because of his fitness that he dropped back to tenth. He later informed us that he had a flat front tire, which left him finishing way back in nineteenth.

Once the Austrian star, Hofer took the lead, it was goodnight nurse as he charged away to win by 31 seconds over Vettik.

Out of nowhere, Russian Aleksandr Shershnev emerged with two laps to go and passed a bunch of guys to cross the line in third ahead of fellow Russian‰Ûªs Maksim Kraev and Nikita Petrov.

In the final race of the day, Rene Hofer pretty much had the title locked down before the gate had even dropped. The Austrian has been phenomenal this year, winning every 85cc race he has entered, so it came as no surprise when he took the lead from the holeshotter, Meico Vettik, on lap two and won the final moto to complete his mission of world domination.

Meanwhile, Japan‰Ûªs Joe Shimoda seems to be the next Akira Watanabe. The young Japanese star has got such a rad style on the bike. He knows how to launch the jumps, with a stylish tap of the rear brake to bring everything into check. It looks awesome. Shimoda was buried in the pack on the opening lap, but didn‰Ûªt let it phase him, he soon made his way into second and cleared out on Shershnev who was dropped back to third.

Behind Hofer and Shimoda, who were clearly the two fastest riders today, a furious battle was waged between Shershnev, Vettik, Svyatoslav Pronenko and Maksim Kraev for third. The four-some were wheel-to-wheel for the entire race, any mistake was costly, and that mistake came from Shershnev on the final lap.

Hofer took the checkers, which couldn‰Ûªt have come at a better time since Shimoda started putting in his fastest laps of the race in the closing stages. Nevertheless, the Austrian got the job done with Shimoda just under 3 seconds adrift. Pronenko pulled out all the stops on the final lap to get Vettik for third, while Kraev rounded out the top five.

Rene Hofer was just as dominant as he was a month ago in Loket, Czech Republic. Another double moto victory saw him claim yet another gold plate. Meico Vettik put in a 2 ‰ÛÒ 4 performance for second overall with Russia‰Ûªs own Maksim Kraev going 3 ‰ÛÒ 5 for third. 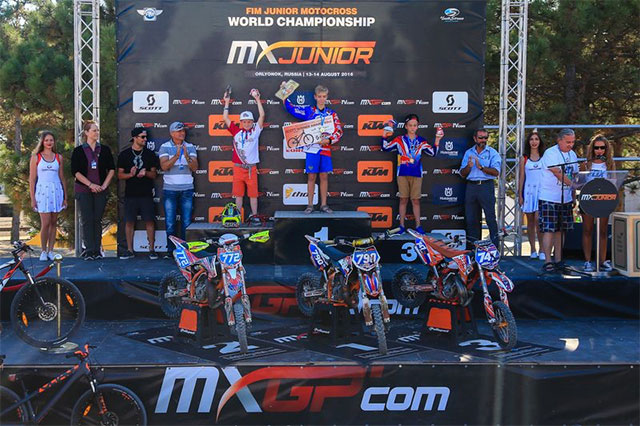 European Open 65cc podium
An uphill start right into a hair pin that heads straight downhill made things interesting for the little guys contesting the European Open 65cc class. When the gates dropped it was the young Latvian Edvards Bidzans who recently made his mark on the world when he won the European EMX65 Championship a month ago, who took the holeshot over Russian Kirill Vorobyov.

Bidzans may have already been thinking about his Fox Europe prize he just won by claiming the Fox Holeshot because Vorobyov passed him relatively easily at turn two. Bidzans tried to respond, but Vorobyov was already carrying far more momentum and managed to make the pass stick.

Five minutes in and Bidzans got fevered. He showed Vorobyov a wheel and challenged for the lead before unexpectedly loosing the front and crashing pretty hard. The kid that was the quickest in qualifying yesterday, Alexey Orlov, then inherited second place, but had some ground to make up on the leader.

Patients, strategy and smarts is not something you expect from a 65cc rider, but Orlov has it, and he dropped the hammer with two laps to go and got right on the rear wheel of Vorobyov. Unfortunately, it was too little, too late and he had to settle for second despite setting the fastest lap time.

At the checkers, the top five finishers were all Russian. Kirill Vorobyov took the flag ahead of Alexy Orlov, Karlis Reisulis, Sergey Glebkin and Ilia Krasnitskiy. Bidzans, on the other hand, pulled in for a pit stop but returned to the race and managed to salvage seventh.

Race two saw a bit of carnage at turn one with Bidzans getting hung up and the race one runner-up, Orlov, going down. On the flip side of all of that, the race one winner, Vorobyov, crossed the Fox Holeshot line first.

On completion of the first lap, the Russian prodigy, Vorobyov, already had a standing ovation from the crowd who were absolutely buzzing over the speed of their Russian star on the rise. As he inched away, the Latvians, Karlis Reisulis and Edvards Bizdans, tried to keep him in check, but in the end, they couldn‰Ûªt match his pace.

At the checkers, Vorobyov made it a perfect weekend with yet another race win while Reisulis edged out his fellow countryman, Bidzans, for second. Orlov had a sassy few laps where he diced his way to fourth; he rode well but was done in by his first turn mishap. Arseny Grishchuk rounded out the top five.

Kirill Vorobyov topped the box with a double moto victory while Karlis Reisulis stood on the second step with Alexey Orlov on the third. 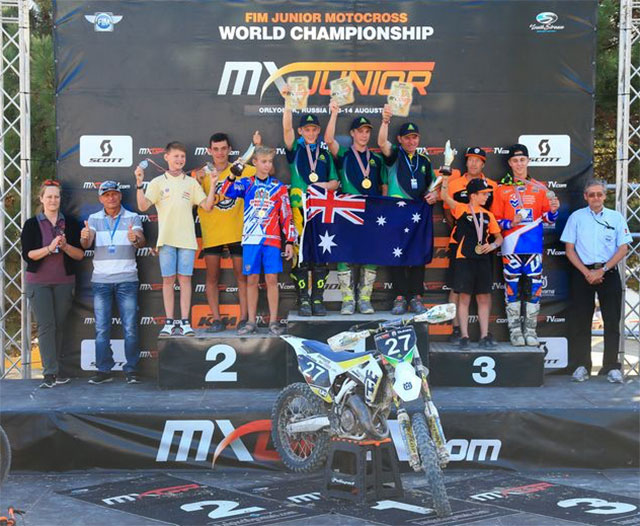 At the end of the weekend Team Australia won the team event ahead of The Netherlands and Russia while Team Latvia won the FIM Ride Green Cup.