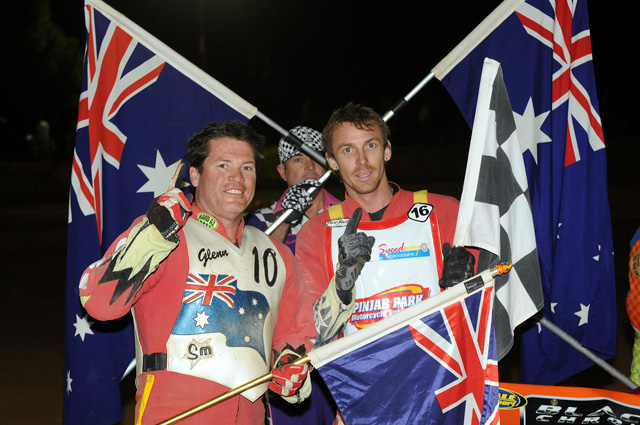 The win was a earned a well deserved start in the Australian National Titles which will be held at Maryborough Speedway, Maryborough in Queensland on the 5th -6th May.

It was the fifth State Title for 48 year old O'Brien, and the first for Aaron Maynard who is just 24 years of age. O'Brien's other four State titles had brother Nathan in the chair. The pair are also the reigning National Champions.

With fourteen sidecars entered it was soon made very clear the standout teams that would be challenging for the title were O'Brien/Maynard and the South Australian pairing of Mark Plaisted and Jamie Banks along with Vince Gianoncelli and Juston Winchester.

In reality that was exactly how they finished with O'Brien/Maynard getting a dream start in the final and they were never headed. Plaisted/Banks threw everything they had at them but were unable to bridge the gap to the flying WA pair. Gianoncelli/Winchester were a very creditable third. 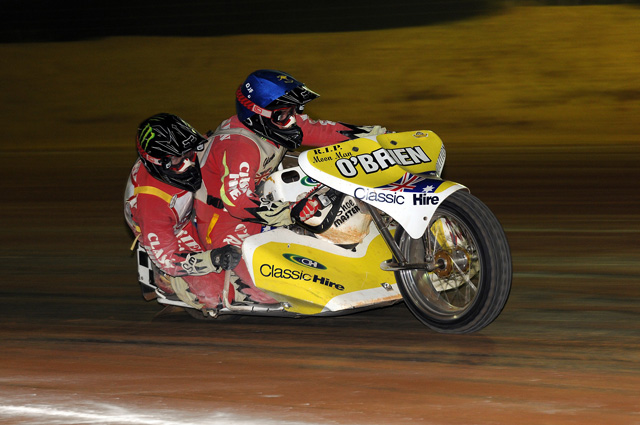 The winning pair on the their way to victoryCredit: John Innes
The night belonged to the home state pairing of O'Brien and Maybard who were both delighted with the nights overall result.

"happy days, we stuck to the game plan we were hoping to get out of gate #1 in the final", said O'Brien but we didn't have quite enough points after the heats, but gate #2 worked really well for us, we experimented with tyres and a few other bits and pieces, and it all paid off.

"Aaron only returned for holidays in Canada two days ago, so he was a bit jet lagged, but he did the job when he had too, the bikes fine and this is the package we are taking over to the National in May. It was really good run-in for it, it worked fine, we are really happy with the game plan, we stuck to it and it got us the result we were looking for." he added.

"It has been a good night, we got a cracker of a start in the final so that made it a bit easier, but overall we had a pretty good night. We were confident, the set-up was working and we didn't really change anything at all tonight. explained Maynard.

"I was feeling it earlier on, I only got back to Perth a couple of days ago so I was a bit jet lagged, but I'm feeling a lot better right now, and I might even stay up a bit later tonight." he continued.

"Now it's off to the Nationals in May, this is the main package we are taking plus we have the other bike already over there, everything seems to be sweet on it and it ran perfectly tonight, so hopefully we can't fault it at the Nationals and we can back-up our 2011 title." Maynard concluded.

Plaisted who had made the long trip over from South Australia, spoke about his reasons for making the trip as well as commenting on his recent effort at the Gillman Speedway on St. Patrick's Day.

"I have done it a few times before (been undefeated during an entire race meeting) but at Gillman it was kind of special as there was some tough competition there with the likes of Darren Treloar, the World Champion and a few other good riders as well so it wasn't too bad at all." said Plaisted

"As for making the trip over here, we have a couple of really good sponsors in Teale Transport and Nashtec Auto Electrics who helped us to get here so we thought we would make the effort and come over and support the new venue and new track, and give it our best shot. I like the venue, it is a good little track, and over time it will only get better." he concluded.