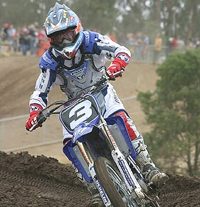 Glen Mcdonald was back to his winning ways taking the dash for cash and winning the 125/250 Snr A Grade: Photo kajx

In near ideal conditions, Victorias Whittlesea and District Motor Bike Club ran their annual Moomba Championship 2 Day open on the 21st & 22nd of Feb at the challenging Broadford Motocross Complex. With around 250 entrants all classes had a good number of entries, with the riders showing enthusiasm and determination at this early stage of the year.

It should be noted that this enthusiasm caused a few get-offs, especially in practice, as for a number of the riders this was their first meeting for the year. This was especially evident when you looked at the new gear and bikes that were parked in the pits

The spectators were treated to a clinical display of aggressive riding by Victorian number 3 rider Glenn Macdonald, riding for team moto Yamaha. He dominated the A grade Lites class and then won the back-to-back dash for cash from all comers in A grade.

The open class saw a spirited battle between Mathew Pike, Clayton Harrison, and current Vic Titleholder Shane Dinsdale (2003 250cc Champ) These three riders put it on the line in every race that made for compulsive viewing. Ultimately Pike would win out in the end with Harrison and Dinsdale following in that order. 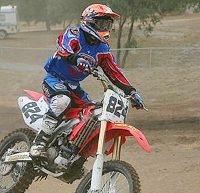 The junior racing was equally as exciting with the 85cc A Grade under 12 class between Yamaha Junior Development rider Troy McNally, Trent Yeo, and Scott Campbell finishing in that order in one of the stand-out events throughout the weekend.

An interesting machine that caught the eye of Kajx.com during the weekend was the BBR150 of Taylor Potter, this machine has to be one of the trickest bikes in the country at the moment, along with being one of the most controversial, due to the rule changes for this year the bike has to be run in the 250cc Junior four-stroke class. Around the horsepower sapping Broadford track, it was an eye-opener to see this little machine end up in fourth place for the weekend, no doubt the ability of Taylor has a lot to do with this as well, I for one would not knock back the opportunity to have a ride on this bike.

It was good to see the number of girls riding at the event, with at least four taking to the track, it was especially pleasing to see that the art of being a gentleman has not left our sport, as one of the guys stopped, dropped his bike and helped one of the girls to pick up her bike after she had a get off, with the bike lying on top of her. In a conversation with Elizabeth Lee after the event, (Eleventh Placed in the Staintune Nationals Women class 2003) the issue of a separate woman's class was discussed, she feels quite at home racing with the guys at this level, while still enjoying the opportunity of a women's class where it is available.