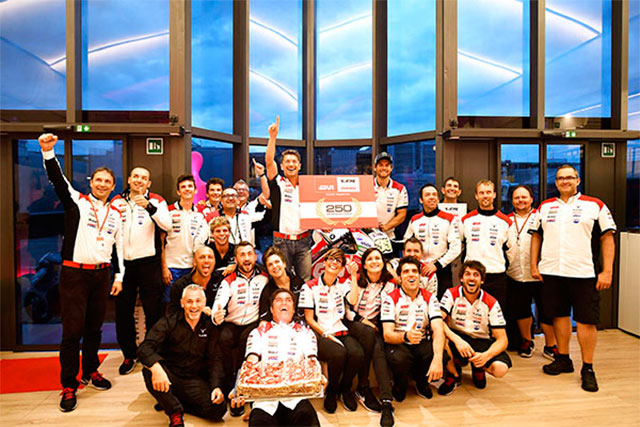 It was 1994 when Lucio Cecchinello competed on his GIVI branded Honda for the first time in the MotoGP World Championship, at Eastern Creek in Australia.

Many years have passed and many talented riders have formed part of the history of the LCR Honda Team alongside GIVI.

The well-known company (based in Brescia and worldwide leader in the production and sale of motorcycle accessories) was founded in 1978 by former rider Giuseppe Visenzi and represents one of the most important figure in the MotoGP field. During the Dutch TT in Assen, Lucio Cecchinello and the entire LCR staff wanted to celebrate this long-term partnership with a special event dedicated to the 250 Grands Prix raced alongside GIVI so far.

Many journalists from a variety of different countries (Italy, Spain, France, UK, Germany etc‰Û_) joined the Team for an aperitif and dinner together with key people from Honda HRC and obviously the LCR Honda rider Cal Crutchlow, who ‰ÛÏsports" GIVI colours for the second consecutive year.

Giuseppe Visenzi (GIVI founder): ‰ÛÏTogether with my wife Willy, my daughter Hendrika and my son Vincenzo we want to deeply thank Lucio and the whole LCR Honda Team for their utmost professionalism, reliability and determination through the years, which has allowed us to reach such a great milestone as 250 Grands Prix. Unfortunately sometimes misfortune has played its part in compromising the ambitious targets that this Team fully deserve to achieve. We hope to get further great results in the future in line with everybody‰Ûªs huge commitment.‰Û