Gibbs, Todd and Duffy on top at Pirelli MX Nationals round three 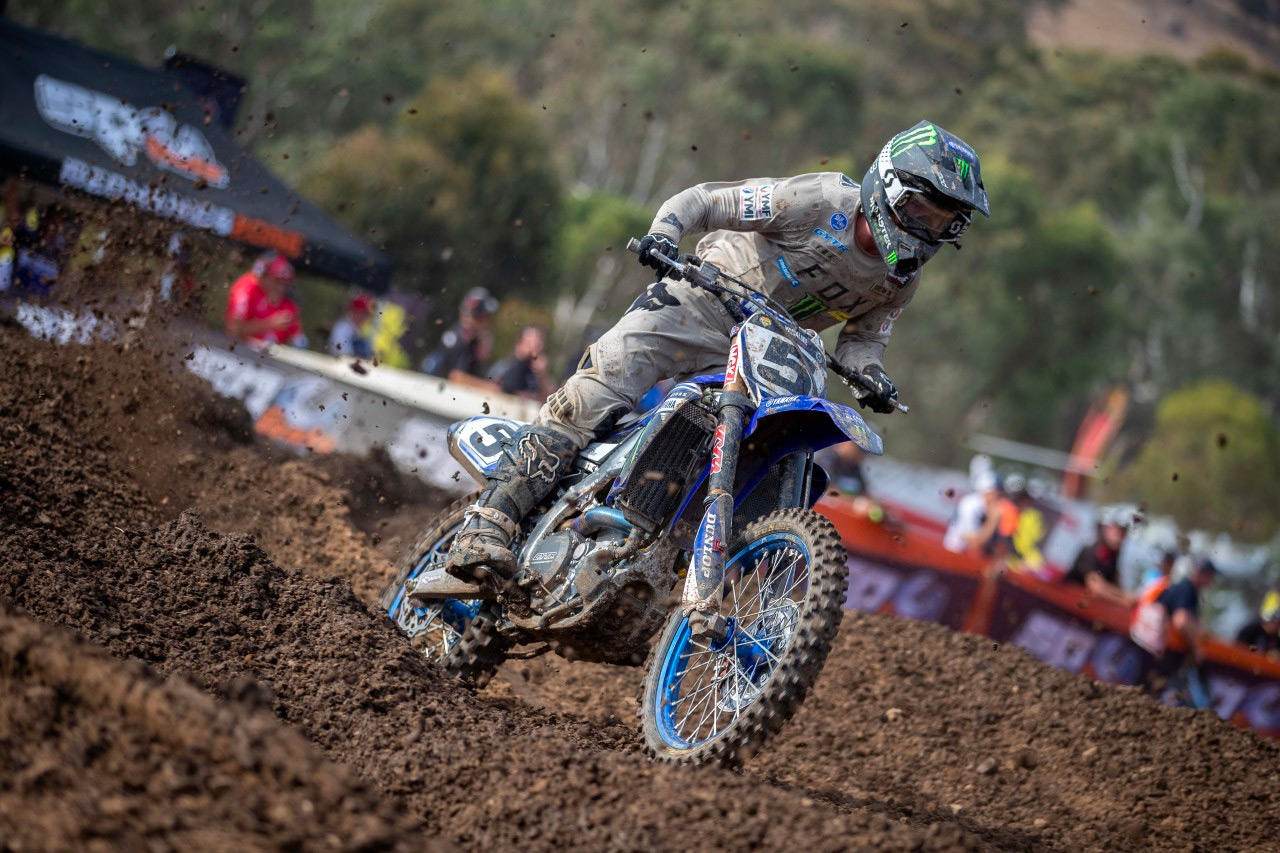 Kirk Gibbs took his first win for the year. Photo: CDR Yamaha
The sun finally came out for the 2019 Pirelli MX Nationals where Kirk Gibbs, Wilson Todd and Regan Duffy all conquered the technical hilly circuit at Broadford in Victoria to claim the wins in MX1, MX2 and MXD respectively.

With the first two round of the 2019 season run under muddy trying conditions, round three offered up one of the toughest tracks in the championship with conditions perfect for racing. With the weather doing its part a healthy crowd turned up to see Australia's best battle it out for top spot, and the racing didn't disappoint. 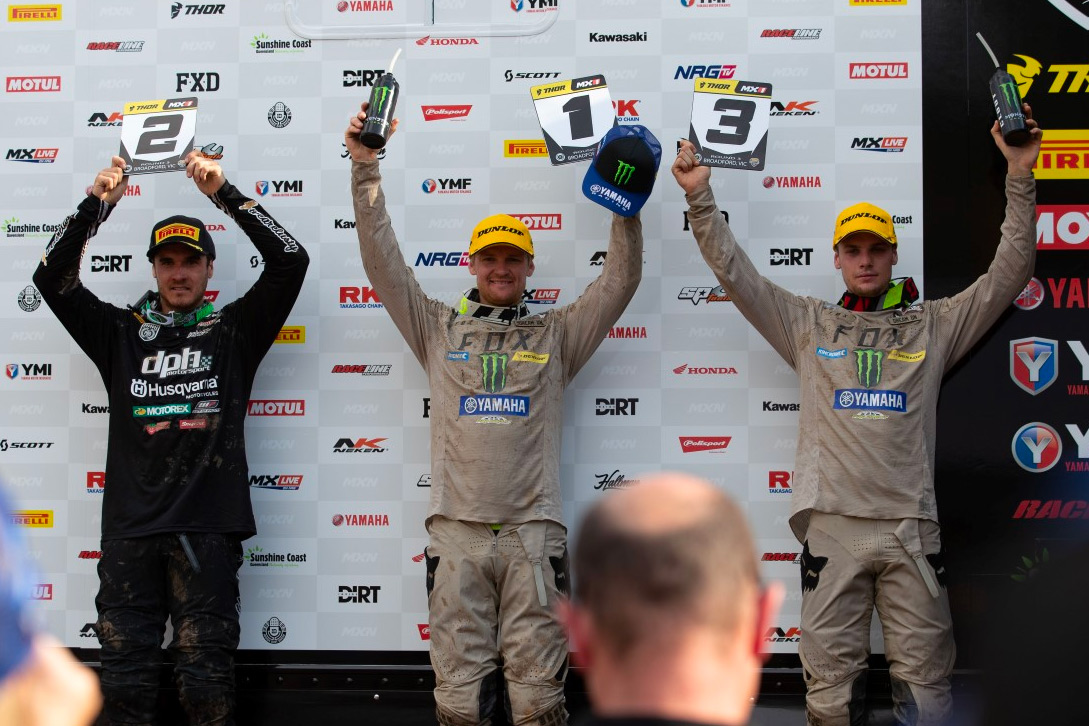 Moto two saw Mellross take the holeshot with Sanders in second once again while race one winner Waters tucked into third. Lawson Bopping got a much better start and ran in fourth after a horror opening moto. Gibbs was battling back in fourth with team-mate Luke Clout.

Waters worked on Mellross hard for five laps before finally making the move at the top of the circuit. Clout and Sanders then went toe to toe before Sanders sent it big time at the triple at the top of the hill and came off second best with a huge crash. This left Clout and Gibbs to battle over the final podium spot. Clout soon dropped back as Gibbs set out after Mellross for second place with a lap to go. Waters was out to a five-second lead which left the main on-track battle between Gibbs and Mellross with Gibbs winning the battle. Luke Clout was fourth while Jesse Dobson once again impressed with fifth.

It was Richie Evans who led the MX1 class away for moto 2 with a solid holeshot over Daniel Sanders, Mellross, Waters, Gibbs and Clout. After the dust settled on lap one, it was Mellross over Bopping and Waters. It took another lap for Gibbs and Clout to join in the front runners battle. Maybe after feeling the effects of a full day Daniel Sanders dropped back to sixth.

Gibbs and Waters traded fastest lap times as they chased down Mellross. Mellross was not intimidated though and dropped the quickest lap of the race in response. By mid-race, the machine-like workmanship of Gibbs got him past Waters to move into second while Mellross was impressing with increasing speed out front. With three laps to go Gibbs needed to pass Mellross for the round win, but it was looking like it wasn't to be with Mellross in such strong form. But things are never over until they are over, and Mellross threw it away crashing on one of the down hill sections with a lap to go allowing Gibbs into the lead and on to take the race and the round overall win. Waters took second ahead of Clout while Mellross regrouped for fourth.

In the overall Gibbs took his first round win for the year over Waters. Luke Clout made it two Monster energy Yamaha's on the podium with third overall for the round.

Pirelli MX2
The opening thirty minute MX2 moto saw DPH Motorsports' Wilson Todd take up from where he left off at round two with a holeshot and gate to flag win. The championship leader controlled the race until the last lap where Penrite CRF Honda racings' Kyle Webster put in a strong challenge for the win, but a slip on the final corner allowed Todd, who qualified fastest, the opening moto win by a few bike lengths. Serco Yamaha's Aaron Tanti ran second for most of the early part of the moto before succumbing to Webster and his team-mate Nathan Crawford. In the end, it was Todd, Webster, Crawford and Tanti. Jay Wilson mounted a strong come back from thirteenth on the opening lap to round out the top five at the flag.

Moto two saw Wilson Todd pull the perfect holeshot with the two two-strokes of Isaac Ferguson and Cooper Pozniak in tow. The biggest loser was race one podium man Nathan Crawford who was way down and just inside the top twenty. Lap two saw Webster break free of the bickering for second place to focus on chasing down Todd. Isaac Ferguson, Riley Dukes, Aaron Tanti and Jay Wilson all battled within a second of each other for a top five spot. Out front, Wilson Todd was looking unstoppable with a ten second lead by lap three! In the final laps, the race was Todd's, but Jay Wilson was determined for a better result and worked his way up to the back of Webster and was looking to take second place but ultimately fell a few seconds short and had to settle for third. Tanti, Dukes and Dylan Wills followed them home.

With another double win, Wilson Todd once again scored maximum points for the round to extend his lead in the championship. Kyle Webster finally had things go his way to take second overall with a pair of second-place finishes while Jay Wilson, who was riding after a finger operation during the week, rounded out the podium for the round.

Motul MXD
Fastest qualifier Rhys Budd controlled all but the last few laps of the opening Motul MXD moto with a patient Max Purvis taking the lead and the win in the last laps. Purvis overcame some early tussles with Championship leader Regan Duffy, WRB Yamaha Team-mate Jack Kukis and Mason Semmens before he settled in behind Budd for most of the moto. Purvis overcame a stall and many lappers to pounce and take the win. Budd held onto second while Mason Semmens held of championship leader Regan Duffy for the third place.

Regan Duffy had a better start in moto 2 taking the holeshot over Rhys Budd and Mason Semmens. The trio then went back and forth for the opening lap with Duffy eventually taking up the front running while Semmens and Duffy squabbled over second. Brodie Ellis and Queenslander Mason Rowe held down the top five. Moto 1 front runners Max Purvis and Jack Kukas ran 12th and 8th respectively and had a lot of work to ahead of them to make the overall podium. Purvis was only able to make it back to sixth by race end. Semmens and Budd rode unchallenged to second and third to conclude the race.

Duffy with a 4-1 took the round overall and extended his championship lead. Semmens and Budd tied on points for second and third with Semmens getting the nod for second on account of his better second moto result.

The championship now moves to Murray Bridge in South Australia for the first of the double round weekend in two weeks.
THOR MX1 Results