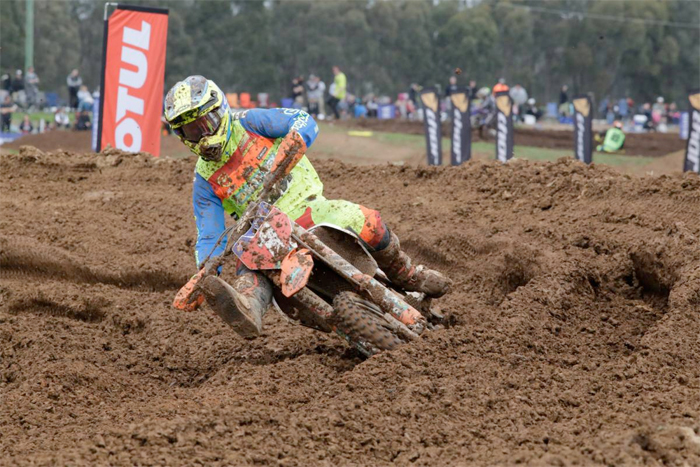 KTM Motocross Racing Team‰Ûªs Kirk Gibbs shined in Shepparton today, taking the Thor MX1 round win at Round 8 of the 2016 Motul MX Nationals.

With the championship being separated by only six points heading into the weekend, every raced proved to be crucial at Shepparton, with Gibbs eventually edging out tough competition to come out on top.

When the Premier Thor MX1 class headed out on to the circuit for their qualifying session this morning, the sun had well and truly come out, and tons of spectators had poured through the gates to watch the fastest riders in the country throw down their quickest times.

Gibbs emerged as the early man to beat in qualifying, while CDR Yamaha‰Ûªs Dean Ferris was also on the pace finishing the session in second. KTM‰Ûªs Jesse Dobson, Wilson Coolair Motul Factory Suzuki‰Ûªs Todd Waters and NPE Monster Energy Kawasaki‰Ûªs Kade Mosig were the final three riders to progress through to GoPro Superpole at the conclusion of the session.

Once all riders had completed their flying laps, it was KTM‰Ûªs Gibbs who secured his first GoPro Superpole win of the year with a lightening fast lap of 1:40.273, awarding him first gate pick and five vital championship points.

When the Thor MX1 bikes lined up for race one, all eyes were on the number one machine of Gibbs who was starting from pole position for the first time this year, but when gates dropped it was Mosig who secured the MXStore holeshot.

However, it took no time at all for CDR Yamaha‰Ûªs Ferris to move in to the lead, followed by Waters, Mosig, Gibbs and Crankt Protein Honda Racing Team‰Ûªs Wilson who completed the top five positions.

After only two laps, Ferris and Waters began to break away from the group, while Gibbs had moved up into third position, relegating NPE Monster Energy Kawasaki‰Ûªs Mosig to fourth.

By the time riders had completed five minutes of racing, Gibbs began to tag on to Ferris and Waters‰Ûª, and with a second consecutive MX1 championship on the line, Gibbs began eyeing off Water‰Ûªs rear wheel.

After 15 minutes, the running order saw Ferris maintaining his lead on Waters, while Gibbs continued in third position, followed by Mosig in fourth. KTM‰Ûªs Dobson had made his way past Wilson to move in fifth position, meaning Wilson and DPH Motorsport‰Ûªs Jacob Wright maintained sixth and seventh places respectively.

In what was a huge shock to spectators, on lap ten, Ferris made a small mistake, crashing and handing the lead to Waters - Ferris forced to re-join the pack in third position behind Gibbs.

From there, Ferris was under pressure to make up time, and with only ten minutes left on the clock the CDR Yamaha rider had his work cut out for him.

As moto one reached its closing stages, Waters looked more and more comfortable out in front, while Gibbs began to feel the pressure from Ferris who was attempting to claw his way back to the front of the pack.

When riders received the last lap board, Waters was in the box seat to take the moto one victory, but spectator‰Ûªs attention was well and truly on Gibbs and Ferris who were locked in to an aggressive battle for second position.

And it was on the final lap that the action played out. Ferris blew past Gibbs like he was standing still in the front section of the track, and not long after that, Gibbs came off and was forced to re join the race in third position.

But when the chequered flag flew, it was Waters who had reason to celebrate, taking the opening moto win from Ferris who finished in second, while Gibbs concluded race one in third.

Fourth place was collected by Mosig, while fifth was awarded to DPH Motorsport‰Ûªs Wright.

In race two, the hole shot was taken by KTM‰Ûªs Gibbs, followed by Mosig, however once again it took no time at all for CDR Yamaha‰Ûªs Ferris to assert his authority, moving past Mosig and up in to second position.

With the top three out in front with a healthy lead, Waters and Wilson began to battle for fourth place behind them, and before long Waters moved past the Crankt Honda machine to move up in to fourth.

As race two progressed, Ferris once again began to close in on Gibbs‰Ûª lead, setting the final race up as a dash to the finish line.

By the half way point in moto two, the running order saw Gibbs maintaining a marginal gap on Ferris, while Mosig who was in third, was just fighting off a hard charging Waters in fourth. Fifth place was occupied by KTM‰Ûªs Dobson.

As race two reached its final stages, Waters made the pass on Mosig for third position, where he also began to eye off Ferris‰Ûªs rear wheel. But it was the battle for the top spot that had spectators on the edge of their seats, with Ferris continuing to close in on Gibbs‰Ûª lead.

And with six minutes remaining, Ferris made a pass on Gibbs that stuck, allowing him to move in to the lead position, relegating last year‰Ûªs champ to second.

By the time riders received the last lap board, competitors were well and truly relieved, with the track getting rougher and ruttier as the afternoon went on, and with only one more lap to steer his CDR Yamaha to victory, Ferris looked ready to take the win.

However, in what was yet another shock to onlookers, Ferris once again made a mistake, going down when out in front which eventually cost him the win - Allowing Gibbs to stream to victory, followed by Ferris and Waters who wrapped up moto two in second and third places respectively.

When points were tallied, it was KTM‰Ûªs Gibbs who was awarded the round victory with 3,1 results, while Waters was handed second position after finishing on equal points to Gibbs on a countback. For Ferris mistakes at Round 8 proved costly, finishing in third position on the overall Thor MX1 podium.

Gibbs retains the red plate after Round 8, and continues to lead the Thor MX1 championship by nine points.

‰ÛÏIt‰Ûªs good to be up here. As everyone has said, the three of us are all riding very well, and it‰Ûªs coming down to who can put it all together. Two solid motos, with no crashes and no mistakes,‰Û