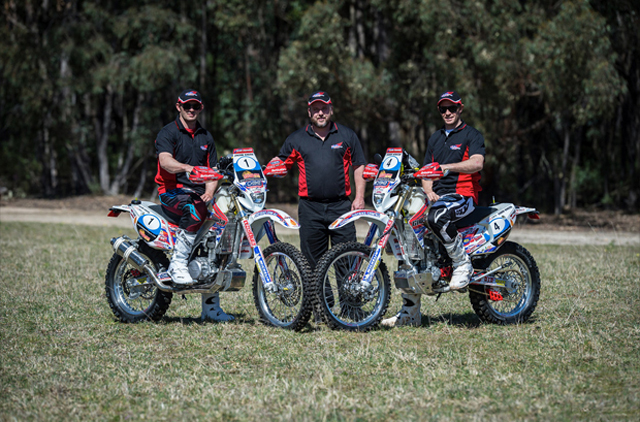 The Australasian Safari is an annual off-road rally for motorbikes, four-wheel drives, side by sides, and quad bikes set in outback Western Australia.

This extreme motorsport event attracts some of the best competitors from around the globe. Considered Australia‰Ûªs answer to Dakar, it is renowned as one of the toughest and most challenging motorsport events in the world.

Yesterday saw the ceremonial start while today, Friday the 20th of September, will see the riders attack Prologue.

Competitors will depart from Perth and head north to Geraldton, up into the Gascoyne region, around the Kennedy Ranges before heading out to tropical Carnarvon. Turning south again the course moves through Kalbarri before finishing in Geraldton on the 27th of September.

The event covers approximately 3000km of Western Australian terrain. After the rave reviews and success of 2012‰Ûªs course, this year's Safari will again feature some spectacular coastal Stages along WA‰Ûªs Coral Coast.

The team recently held a test session on the east coast before all the infrastructure was shipped across to Perth, where team manager Glenn Hoffmann was happy with how both the boys and the bike were progressing.

"Testing went well and Simon has again done a great job with the bikes." Hoffman stated. "The boys are very happy with their Honda 450X's and now that they are passed scrutineering it is just a waiting game to get the race really started."

"Yamaha and KTM have strong rider line-ups and there is even a Aprilla this year." Hoffman continued. "However Jacob and Todd have been swapping Outright wins in the desert all year long on both their GHR Honda 450R's and 450X's - so hopefully it is one of the boys.

"The Safari is a very cruel race to man and machine and I think the person who is best prepared and has the least downtime will do well. As a race Dad you cant play favourites, but obviously I hope the winner is on a Honda and surname is Smith!".

#1 Jacob Smith - pre-event testing - Credit: Ross Briggs
The boys will once again be joined by WA Honda riders Charlie Ball and John McDonald. Two years ago Charlie rode with GHR to a top ten finish and after taking a supported ride at Finke this year, John McDonald is ready to tackle the Safari challenge. Keep up to date with their progress via GHR.

For Honda the Safari is another historic desert race. With more wins at the Safari than all other manufacturers combined, Honda is once again aiming to prove the reliability and performance reputation it has earned over decades in the desert.

Having been aligned with GHR for the last ten years on Safari, the manufacturer backed team has only lost the rally once and has even beaten five time Dakar winner Cyril Depress on his works machine.

With the support of, sponsors, family and friends of GHR, whos help and effort make this huge task possible. It is a monumental effort to get to the start line but to keep winning year after year in this rally environment - at times against the worlds best - is a credit to the GHR Honda team.