Geoff Braico maintains E3 lead after a mixed weekend for KTM in S.A

The round seven and eight double-header saw team‰Ûªs E3 contender Geoff Braico extend his lead in the big-bore championship on the team‰Ûªs powerful KTM500EXC, with a pair of runner up finishes and excellent Outright placing, culminating in 7th in today‰Ûªs sprint format event.

‰ÛÏSaturday I made a few little mistakes in the first couple of sprints, just stalled and had a couple of tip overs which made me a little annoyed." Braico explained. "The first test I really liked, then the next one was brutal, just super rough and I struggled.

"Still, I got second and ninth on the day which wasn‰Ûªt too bad as Jarrod Bewley rode awesome all weekend.

"Sunday we raced in the quarry track and I had a pretty huge crash in the brutal track but didn‰Ûªt lose much time and ended the day with second and seventh." Braico continued.

"The bike was great and I really need to thank my suspension guy Charlie Costanzo again. My goal is to be getting top-five outright in the sprints. They‰Ûªve been my weak point so far and this is a step in the right direction but I‰Ûªve still got work to do.‰Û 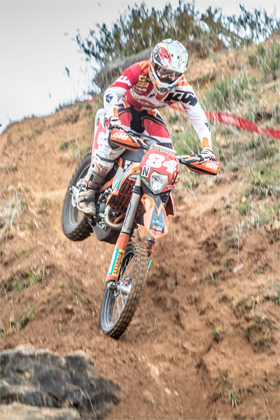 Chris Hollis lost valuable points in the outright points standings in South Australia - Credit: Fourohfour
The team‰Ûªs two-time AORC champion Chris Hollis saw his series chances take a hit struggling to sixth and fourth outright places in the tight and tricky conditions which made it difficult for him to utilise the performance of his KTM450EXC.

Hollis was able to use his superb fitness as an ally in the fight as the conditions grew rougher and rougher. He won the final sprint to limit the championship damage as much as possible, but was unable to reign in series leader Daniel Milner who won both rounds.

‰ÛÏI struggled with the sand here." Hollis admitted. "I got faster as I went and won the last test but struggled with one big whooped section through the grass trees that wanted to throw you over the bars the whole time.

"Championship-wise Milner won both days so he‰Ûªll take a few points here, but there‰Ûªs not much I can do. I know I rode as quickly as I could the whole time so there‰Ûªs nothing else I could have done.

"The bike was really good and I got faster at the end. I‰Ûªve just got to keep my chin up; I‰Ûªve got Hattah and the 4-day now. Hattah I got taken out in the first 500 metres of the race last year so hopefully we can have a bit more of a positive run this time," he added.

KTM's E1 pilot Ben Burrell celebrated his birthday on the first of the two day event, but unfortunately he did not celebrate in the fashion he was hoping for on track.

‰ÛÏWell it was my birthday on Saturday and it wasn‰Ûªt really the present I wanted." Burrell commented. "I‰Ûªd have liked to be a bit higher but I had a few crashes which didn‰Ûªt help.

"I just struggled with one test in particular which was pretty hairy, you couldn‰Ûªt make any mistakes and I just pushed a little bit hard in a couple of spots and the bike spat me off.

"Luckily I didn‰Ûªt break anything, the crashes only cost me time," he added.

"Sunday was no better at all. The sand and the roots took a bit of getting used to but I can‰Ûªt really put my finger on what the problem was. You need a good flow to go quick but I just couldn‰Ûªt find mine. So we‰Ûªll come away, have a think about what we can do better and make it happen.‰Û 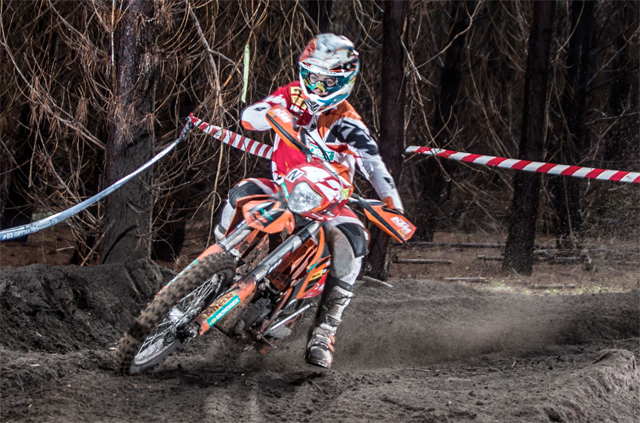 Ben Burrell did not have the birthday he was looking for at rounds 7 and 8 of the 2013 AORC - Credit: Fourohfour
Team manager Brad Williscroft, knows the team will have to step things up if they want to be in contention for the outright championship win when the series heads to Dungog, NSW in early September.

‰ÛÏThis weekend Geoff rode really well, especially considering he had a couple of get-offs. He consolidated his lead in the E3 class and he‰Ûªs doing everything asked of him." Williscroft stated.

"Benny is trying hard and he‰Ûªs putting in a few really fast laps but then he can‰Ûªt seem to keep it on two wheels.

"Chris started slowly and took a while to find his groove but by that time it was too late as the other boys had put a lot of time on him. We conceded valuable outright points, which is disappointing for him and the team and it will be an uphill battle for him now to get into the outright championship from here, but there are still four rounds to go so anything is possible.

"We really need to step up at the next round and come away with two solid wins to have a chance." Williscroft concluded.

The next round of the 2013 AORC heads to Bendigo in Victoria on the 17th and 18th of August.

Top Image: Geoff Braico (top) extended his lead in the AORC E3 championship at round 7/8 of the championship in South Australia.
Credit: Fourohfour