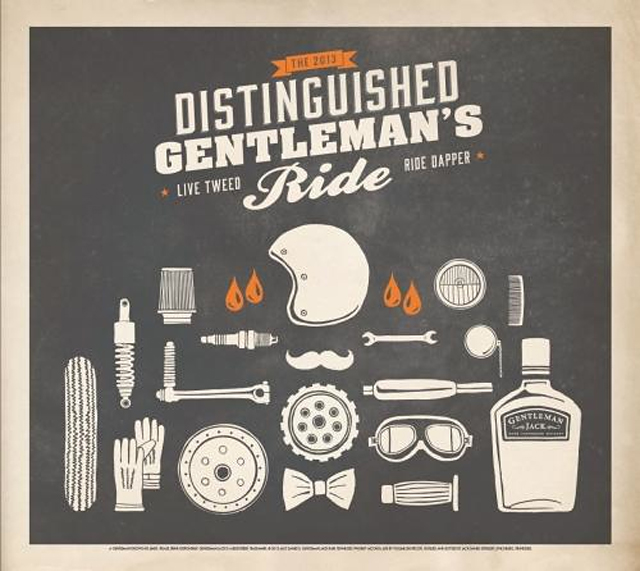 Gentleman Jack has jumped on board a global motorcycle ride day raising awareness and funds for men's health issues.

The Distinguished Gentleman's Ride takes place on the exact same day in over 100 cities worldwide. The event started in 2012, and in its first year was held in 64 cities across the world. Since then the ride has grown via word-of-the-mouth and organically through social media.

It celebrates all things dapper, the love of classic bikes and of course what it means to be a true gentleman. Originally created for owners of Cafe Racers, Bobbers, Flat Trackers, Retros and other classic motorcycle owners, the Distinguished Gentleman's Ride has evolved to be a charity event raising awareness, and funds, for serious men's health issues, like Prostate Cancer.

"We are delighted to be supporting The Distinguished Gentleman's Ride. A true gentleman will always give a helping hand, and we feel privileged to help raise awareness for important issues that effect men's health today," Luiz Schmidt, Brand Manager of Jack Daniel's, said.

Gentleman Jack encourages all to show their support by joining the ride as a rider, spectator or sponsor. Be sure to spread the word... The Distinguished Gentleman's Ride is as much about family and friends as it is about the ride.

This year the ride will be held globally on 29th of September in a city near you.

Sydney
- Meet at the Whole Bean Cafe on Chapel Street in Marrickville @ 9:30am
- Ride starts @ 11am
- After Party starts from 1pm @ Rum Fire in the Entertainment Quarter