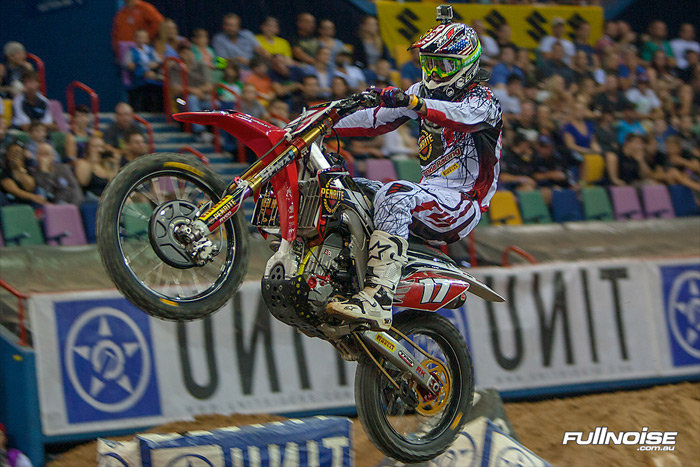 Faith, who won the Australian Supercross SX2 title in 2014 and 2012 will return for his fifth season with the Penrite Honda Racing Team.

Running on the same weekend as the Supercheap Auto Bathurst 1000, Round 1 of the Australian Supercross Championship will be held in the evening on Saturday 10 October, giving motorsport fans the chance to see the best on four and two wheels in action.

Faith stood on the top step of the podium at last year‰Ûªs Bathurst event, taking the Saturday night round win in the SX2 class.

The American will step up to the highly competitive SX1 class for 2015 where he will line up against riders including multiple Supercross Champion Matt Moss and Venezuelan Motocross Champion Anthony Rodriguez.

"I am really looking forward to coming back to Australia," said Faith, who hails from Fort Dodge, Iowa, but bases his racing and training program in the USA out of Florida. "I love the country and am excited that the Australian Supercross Championship is growing.

"I was super-pumped to win the SX2 Australia championship last year and will be going all-out for another championship this year."

Faith is a supercross and arenacross specialist, and along with his dual Australian Supercross championships, is also a winner of the German Supercross Championship.

The popular American will be joined at the Penrite Honda Racing Team and in the premier SX1 class by Venezuelan Motocross Champion Anthony Rodriguez.

20-year-old Rodriguez won multiple national motocross championships in his native Venezuela, before taking aim on a race career in the USA, which saw him rack up a dozen American amateur national titles before turning Pro.

With the Australian Supercross racing kicking off at 7.00pm, fans will be able to enjoy a full day at Mount Panorama before heading to town for an evening of family entertainment, world class supercross racing, and freestyle motocross.

For further information and to purchase tickets visit www.australiansupercross.com.au

Top Image: American Gavin Faith will step up to the SX1 class here in Australia in 2015