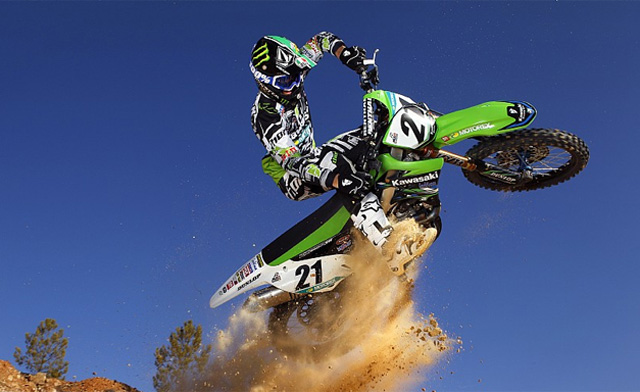 Gautier Paulin has won the MX1 Class at the third round of the Dutch Championship, in Heerde, Netherlands, during his bid to be as prepared as possible heading into round one of the FIM world motocross championships.

Paulin had not trained on a sandy track in the type of conditions presented to him on the weekend, when rain hit the track and the conditions became substantially harder even harder to ride as the sand had become heavy.

After three days of testing this week with a Japanese engineer from KHI (Kawasaki Heavy Industries), Paulin was happy with the engine settings however it was his team mate Xavier Boog who took the holeshot in both races. Though Paulin was not as strong as his teammate Xavier at the start, he still managed two consistent races with a fourth in the opening moto, and a second place in the second moto after a late race pass on Rui GonÌ¤alves gave the French rider his second overal pre season victory.

"I want to dedicate this win to the team." said Paulin. We have all done a great job since I joined them this winter; the team is based in the Netherlands, but they haven't won there since a while.

"The track was very strange, with a lot of slow corners and some deep holes. My feeling was not so good during the first race, so I didn't take any risks and just secured a fourth position. Between the races we worked on the suspension settings, and the result was perfect" he explaned

"Last week we worked mainly on the engine, and we had no time to work on the suspension. But we found a good balance today, and I'm happy to see that we all work is heading in the same direction, with great results. If I would have had a good rhythm earlier in the first heat I think that I would have won this one as well, as I finished so close from Ken De Dycker." he continued

This week we'll continue to work and prepare for the next round of the Dutch series; with the new parts the engine it is so powerful, we need to work with Kayaba on the suspension. We have three weeks prior the GP in Valkenswaard, and I'm feeling confident." concluded Paulin 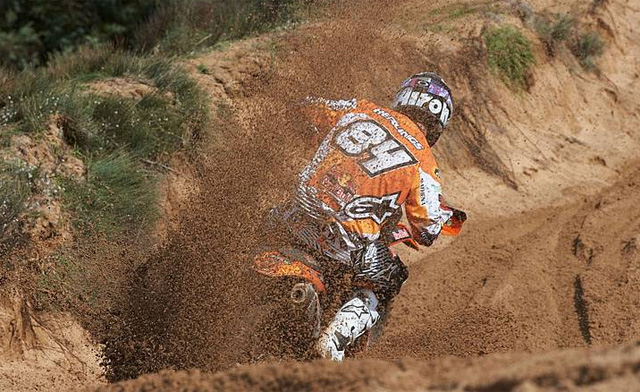 Red Bull KTM rider Jeffrey Herlings was on the top of his game again on Sunday in the deep sand and overcame difficult conditions to win both MX2 motos by a substantial margin.

Herlings was already in form in the morning qualifying and was the fastest rider on track which he used to set himself up for the afternoon races on his favorite sandy surface.

with conditions starting to deteriorate in the first moto when rain made the track very heavy and restricted the riders' vision. Herlings had gone out in normal goggles with no tear-offs and admitted he had difficulty seeing. "There was fog on the inside and mud on the outside so I really couldn't see much at all," he said.

Then in the second moto, Herlings was third going into the first corner when Jeremy van Horebeek went down right in front of him. "I had to slow right down so I didn't hit him then I was back at about fifteenth place. But I got back in the race and started to close the gap and in the end I was able to take another win." Herlings commented.

Despite the problems early in the race the Dutch teenager still finished one minute 38 seconds ahead of the second placed Joel Roelants. Giving Herlings the overall win for the day ahead of Roelants.