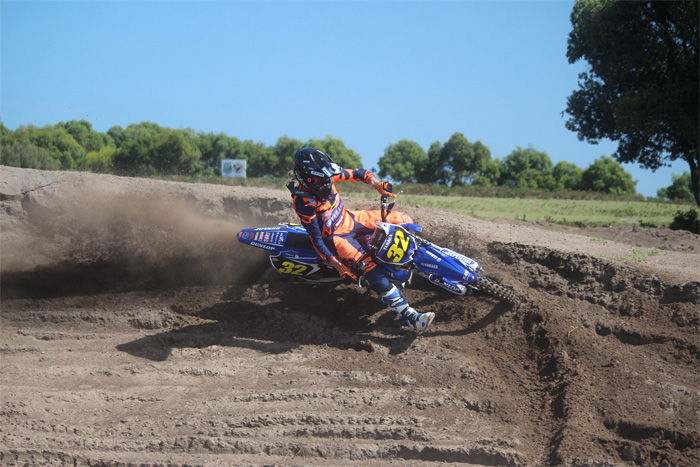 The Victorian GYTR Yamaha Junior Racing Team of Liam Andrews and Ty Sharp were presented with a perfect track for at Rosebud for round three of Victorian Junior Motocross Championships last weekend. The club has worked tirelessly on this fantastic sand based track to present it Saturday morning in tip top shape.

Ty Sharp calls Rosebud home so he had big plans of putting in a good showing over the two days while Liam Andrews has simply been getting better and better every time he swings a leg over the bike in 2017 and was out to rack up some more moto wins.

Saturday saw Liam line up on his YZ250F and moto one was a barn burner. Liam charged hard all the way to the finish to take second place and within a bike length of the race winner, which had the crowd on their feet.

Moto two didn't go to plan after coming to together with another rider in the second corner and getting stuck under another riders‰Ûª bike. After getting going and another small fall, Liam could only manage a 12th place finish. Moto three went much smoother with a solid third and his combined 2-12-3 results gave him fifth for the day and he maintained third place third place in the championship.

Ty was racing his 65 for the first day and right from the first lap you could see Ty was comfortable in the thick sand. Ty had to do it the hard way with average starts but he got better in every race starting with a fifth, followed by a third then a strong 2nd in the final moto on a track that was super rough for the little 65. These results were enough for third on the day and cement his second in the championship with a round to go.

Ty was first up on his super trick YZ85 and race one didn't start so well when he got stuck in the gate and rounding turn one in last place. But all that did was simply charge him up and Ty put his head down and passed riders one by one the entire moto until he hit the lead in the later stages to go on and take an amazing race win.

Race two went well with a strong third place and Ty was hoping to finish the day off well in moto three but a small fall and then getting stuck on a jump face on a tyre meant his hopes of taking the overall victory were taken away. Still, Ty showed he has winning speed so he can't be too disappointed with his performance and claimed fourth for the round.

‰ÛÏI'm so pumped to win a moto on my 85 and to come from last to do it was awesome. My bike was so good to today, it was just that last race that let me down but that‰Ûªs the way it goes and I will try not to let that happen next time,‰Û