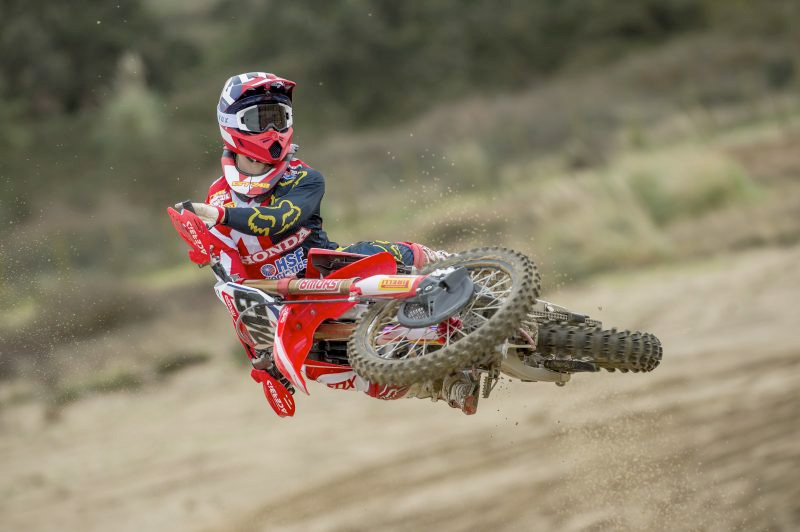 After missing the opening event of the season with a broken jaw, two-time World Champion Tim Gajser will join MX2 teammate Calvin Vlaanderen, as the Slovenian rider reunites with the squad for the first time since fracturing his jaw in Mantova last month.

Gajser jumped back aboard his Honda CRF450RW for the first time last week to test his condition and felt no pain or discomfort. Further rides confirmed a positive a fitness status so is now ready to tackle the first European event of the season.

"I'm so happy to be finally making my season debut! I feel ready to go; I‰Ûªve ridden three times already and I‰Ûªm getting more and more comfortable on the bike. Now I am just looking forward to getting to Valkenswaard and racing again," Gajser enthused.

"It will obviously be harder than normal not only because I‰Ûªm back from injury but also because the other guys already have one round under their belts. But nevertheless I‰Ûªm in good shape, I‰Ûªve been training a lot and I got back the few kilograms I lost due to the inability to eat properly in the early part of the recovery. I can‰Ûªt wait to be back with the team again; it wasn‰Ûªt fun to watch the races from home!

After his encouraging comeback to fifth place in the second MX2 race at Villa La Angostura, Calvin Vlaanderen is eager to continue building momentum as he keeps gelling with the all-new Honda CRF250RW.

"I‰Ûªm very excited ahead of the second round of the season; I feel good with the bike and the team and I‰Ûªm confident of my chances of doing well at Valkenswaard, a track where I‰Ûªve had good results in the past," Vlaanderen said.

"For me it is sort of a home GP as I‰Ûªm based in the Netherlands and obviously this gives me a great feeling, so I hope to see many Dutch and Belgian fans there this weekend. I hope the track won‰Ûªt be frozen, but it looks like it will surely be harder than previous years because of the weather and temperatures expected ‰ÛÒ as we‰Ûªre also racing quite early in the year this time.

The MXGP of Europe is a home event for Eindhoven born-and-raised Brian Bogers who, despite still being unable to compete, will nevertheless attend the event to catch up with fans, media and his team. The 21-year-old Dutch rider was back on a motocross bike earlier this week ‰ÛÒ for the first time since injuring his foot last November ‰ÛÒ to test his condition and the progress of his recovery.

"Valkensward has been kind to us in the past and we look forward to returning there every year," HRC General Manager - MXGP - Marcus Pereira de Freitas, said. "It is surely not an easy track to race ‰ÛÒ it used to be a really deep-sand course ‰ÛÒ but over the years it has changed and now it features a much harder base surface.

"We‰Ûªre obviously very happy to welcome back Tim, because it‰Ûªs his first MXGP round of the year after his injury. The goal for him will be to build some confidence back and score some valuable points. Calvin had an encouraging debut with the team in Argentina and showed good speed, so we are eager to see how he performs in the Netherlands."