Gajser and Jonass on top following qualifying at Redsand

Hunter Lawrence and Jed Beaton quailfy in the top ten 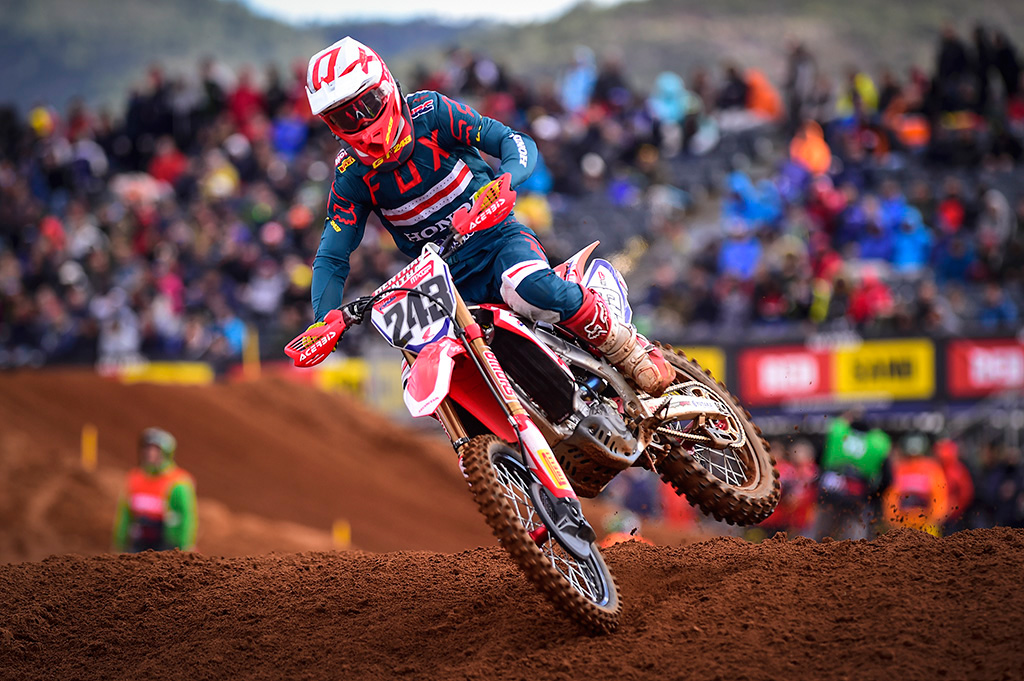 HRC's Tim Gajser is back up to speed after a pre-season injury. The former MXGP World Champion took a 3 second win over Romain Febvre in MXGP qualifying.
The third round of the 2018 MXGP Championship got underway today at Spain‰Ûªs Redsand circuit with Tim Gajser and Pauls Jonass setting the pace in qualifying for tomorrow's MXGP of Spain.

. The first time MXGP host is providing excellent racing conditions thus far as the Qualifying races were full of action. Team HRC‰Ûªs Tim Gajser is back at the front of the MXGP field while Red Bull KTM Factory Racing‰Ûªs Pauls Jonass remains the top contender in MX2 after they each won their respective qualifying races!

Team HRC‰Ûªs Tim Gajser is no stranger to leading the MXGP field but recent injuries had held the Slovenian back until today. Gajser took the lead from the start grabbing the holeshot by holding the tighter line over Brit Max Anstie.

Joining Gajser at the front was another MXGP World Champion, Monster Energy Yamaha Factory Racing‰Ûªs Romain Febvre. Febvre was in second immediately after the start and continued to apply the pressure on Gajser for the remaining 13 laps.

Behind Gajser and Febvre was Frenchman Gautier Paulin. Paulin had a miraculous save on the opening laps of the race when he got his foot over the scrub jump. Luckily he didn‰Ûªt lose much time and was able to settle into third. 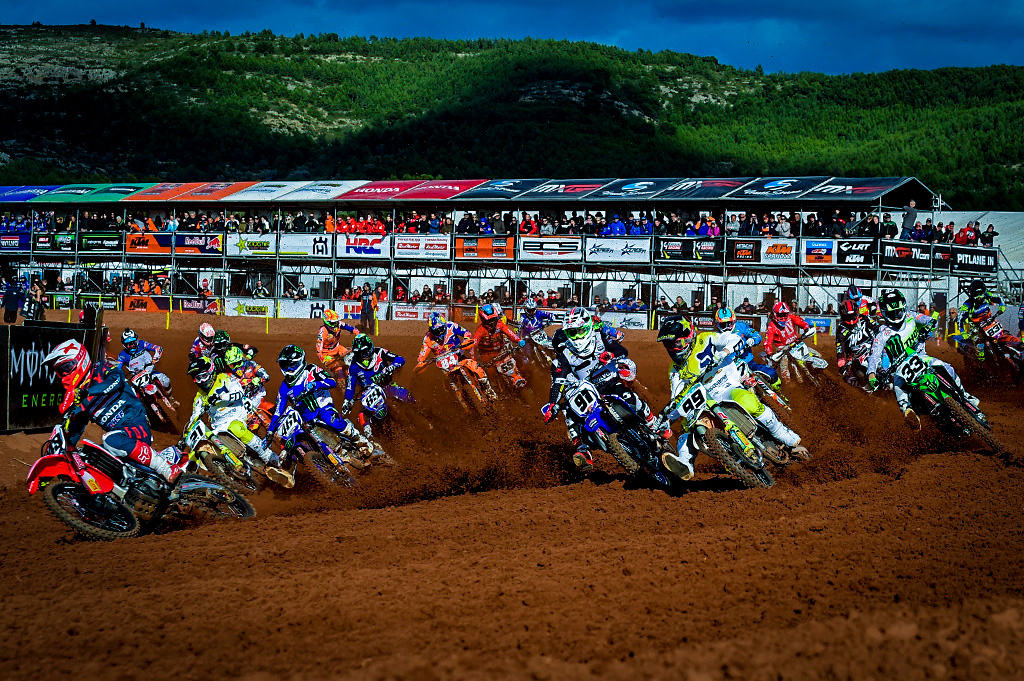 The MXGP class hit the first corner at the Spanish RedSand circuit for the first time, Photo: Youthstream
The Red Bull KTM Factory Racing riders of Jeffrey Herlings and Antonio Cairoli both started outside of the top 5 and each had to come through riders throughout the race. One of the riders that proved toughest to pass was Wilvo Yamaha Official MXGP Team‰Ûªs Jeremy Seewer.

Herlings followed the Swiss MXGP rookie for 4 laps before finding a way past to take 4th. Seewer showed he had the speed to keep up with Herlings even closing back in on the #84 before missing his line and allowing Cairoli to squeeze by.

Cairoli was then on a mission to pass Herlings and with 2 laps to go the Sicilian charged past his KTM teammate for 4th. At the finish Gajser was too tough for Febvre to pass as Paulin hung on for third with Cairoli and Herlings rounding out the top 5. 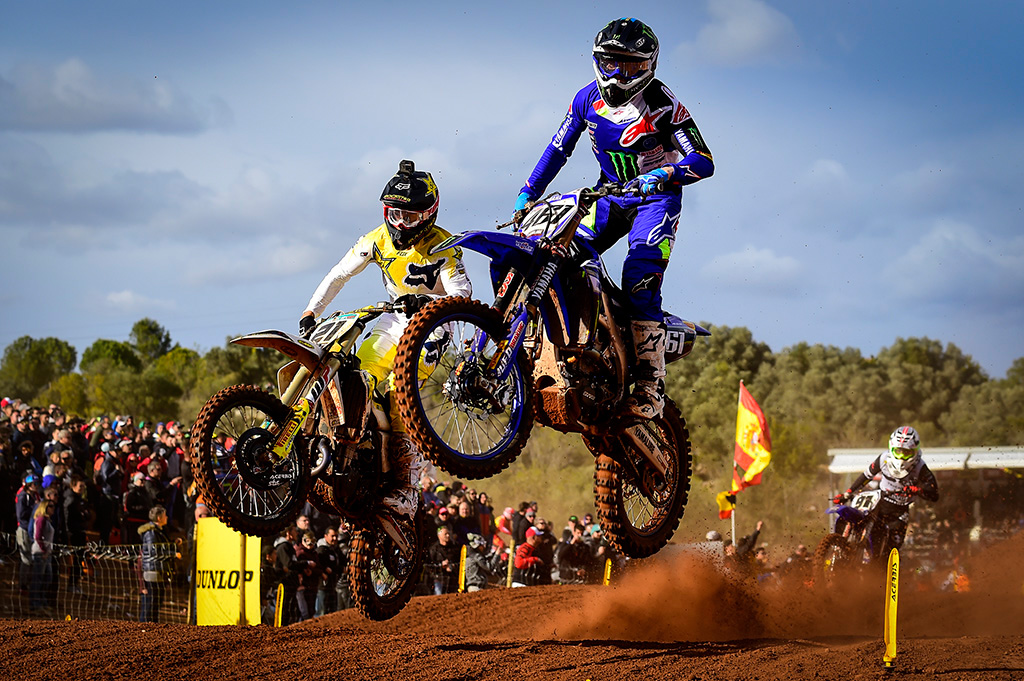 Frenchman Romain Febvre was not far behind Gajser and is in stellar early season form. Photo: Youthstream.
With 4 former World Champions in the top 5 racing is expected to be even more intense tomorrow.

"It feels great to win the qualification race! Gajser said, "I‰Ûªve been feeling really good all day; the start was really important and we got a very good one and also speed and consistency were there - despite a couple of mistakes. Overall I‰Ûªm really happy. The goal now is to do the same tomorrow and have fun, because when I do I‰Ûªm fast! A big thank you goes to the team; today is a very important day for me and I‰Ûªm happy to celebrate it by winning the qualification race. 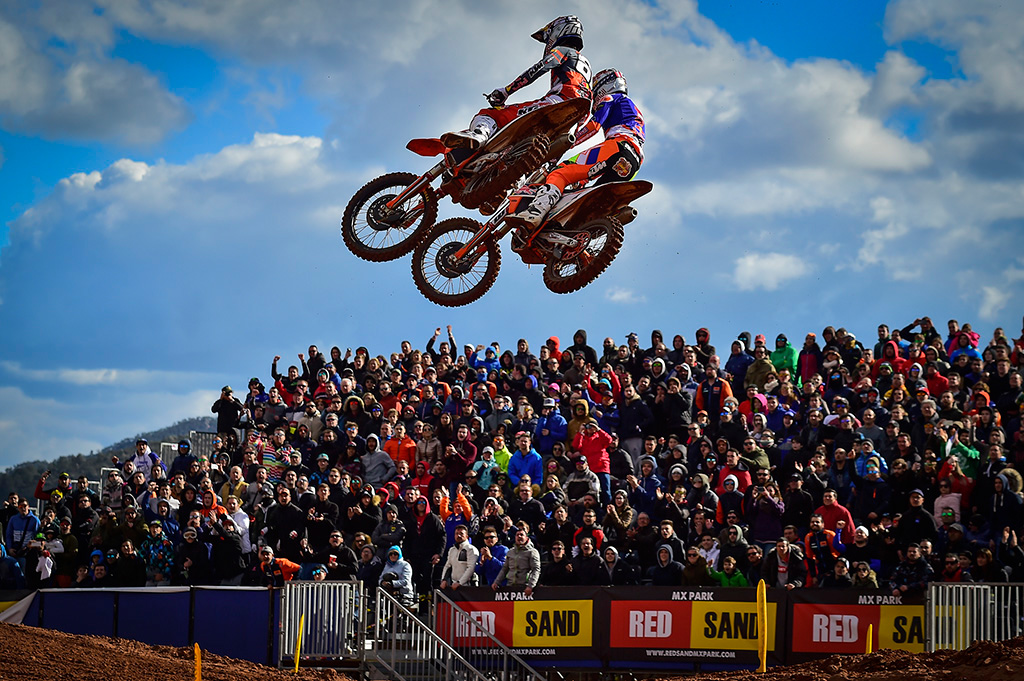 Fastest in both the Free and Time practice sessions was Darian Sanayei. Sanayei carried his speed into the qualifying race with a good start placing him just behind F&H Racing Team‰Ûªs Adam Sterry during the opening laps.

Sanayei passed quickly making his way to third ahead of Thomas Kjer Olsen. It was also a good qualifying race for Honda 114 Motorsport‰Ûªs Hunter Lawrence as he finished in 5th only 4 tenths of a second behind Olsen.

At the front Jonass tried to inch away but Prado wasn‰Ûªt having it, keeping both Jonass and the fans on their toes. While Prado chased Jonass the #57 of Sanayei was right on the pair of KTM bikes in what was a 3 way battle for the win!

‰ÛÏThe start will be the key tomorrow‰Û_I hope they keep the track rough so it will be more technical. It was a good race, another close and I enjoy it," Jonass said.

Prado added, ‰ÛÏIt is nice to see all the Spanish fans and for sure they give me extra motivation once I pass in front of them they go crazy. I am really happy to have another Spanish GP especially here at Redsand, it is a really cool track and the organization is very good.‰Û