Gajser and Jonass on pole in Loket

After a four-week break in the calendar, it was almost like a halftime ‰Û÷reset‰Ûª for the riders and teams who have all returned to the paddock rested and excited for the last six rounds of the cut-throat MXGP series.

The qualifying races for the thirteenth round of the FIM Motocross World Championship took place today on the hills of Loket, Czech Republic, where caps were tipped to Honda Gariboldi‰Ûªs Tim Gajser and Red Bull KTM Factory Racing‰Ûªs Pauls Jonass who will be going to the gate first in the main events tomorrow after their impressive Qualifying Race victories.

It was an exciting return to action in the premier class with the return of the defending champ, Monster Energy Yamaha Factory Racing‰Ûªs Romain Febvre, who sustained a head injury after a nasty fall at the FULLBACK MXGP of Great Britain, and Red Bull KTM Factory Racing‰Ûªs Antonio Cairoli making the switch back to the KTM350SX-F, the same bike he won four of his eight world titles on.

While a lot of eyes were on Cairoli, it was his Red Bull KTM teammate, Glenn Coldenhoff, that caught everyone‰Ûªs attention when he took the holeshot ahead of the championship leader, Honda Gariboldi‰Ûªs Tim Gajser, who took the lead almost instantly. 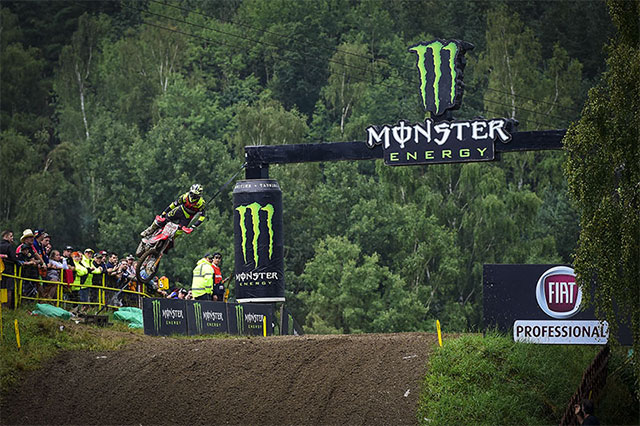 MX1 winner Tim Gajser
It was all drama behind the Honda star when a revitalized Kevin Strijbos launched his Suzuki World MXGP machine past Cairoli and Marchetti Racing KTM‰Ûªs Jose Butron for third. In effort to do the same, Cairoli got too hard on the gas and bobbled while trying to pass Butron which allowed Monster Energy Kawaski Racing Team‰Ûªs Clement Desalle to shoot up the inside of him. The KTM legend got squirly and with nowhere to go he clipped Desalle‰Ûªs rear wheel and crashed.

Meanwhile Rockstar Energy Husqvarna Factory Racing‰Ûªs Max Nagl fell victim to the trickiness of the track and had a front-end washout while Monster Energy Kawasaki Racing Team‰Ûªs Jordi Tixier planted Butron for sixth before crashing on his own a handful of laps later.

As Gajser went on to slay the field for his seventh Qualifying Race victory of the season, Strijbos managed to take advantage of Coldenhoff who was fading fast. Desalle was the next to pass the ‰Û÷259‰Ûª who then fell victim to Monster Energy Yamaha Factory Racing‰Ûªs Jeremy Van Horebeek on the same lap.

Febvre was the fastest in Timed Training but was done-in by a bad start. Despite having to come through traffic, Febvre was impressive on the slick stuff and managed to set the fastest lap time of the race on his way to sixth.

Five different manufacturers make up the top five with Honda and Gajser on top, Suzuki and Strijbos, second, Kawasaki and Desalle, third, Coldenhoff and KTM, fourth, and Van Horebeek and Yamaha, fifth. 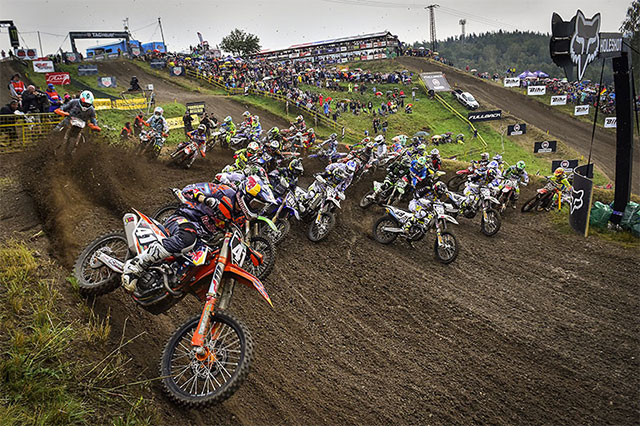 The MX2 class head for the first corner
Words can‰Ûªt describe the emotion on the line in MX2 when Red Bull KTM Factory Racing‰Ûªs Jeffrey Herlings doesn‰Ûªt line up. The motivation of believing they‰Ûªll win the race helps them turn up the intensity, which makes for epic racing each and every time. Rain also made for a wild race with the already hard and slick surface becoming incredibly slippery. Did they back it off? Absolutely not.

Red Bull KTM Factory Racing‰Ûªs Pauls Jonass was lightening fast out of the gate and led the hungry Monster Energy Kawasaki ace Dylan Ferrandis around turn one. Rockstar Energy Husqvarna Factory Racing‰Ûªs Max Anstie was third fastest in the timed training session, a fraction of a second off Ferrandis and Jonass, and was third over the holeshot line with his teammate, the MX2 rookie, Conrad Mewse along side him.

Without trying to stereotype, Ferrandis is French, and just like the Dutch are renowned for their sand riding skills, the French are renowned for their clay riding skills. Throw in some hills, a few rocks, and a bit of rain to make things extra tricky, boom! The French are in motocross heaven, at least Ferrandis was after he took the lead on the second lap. 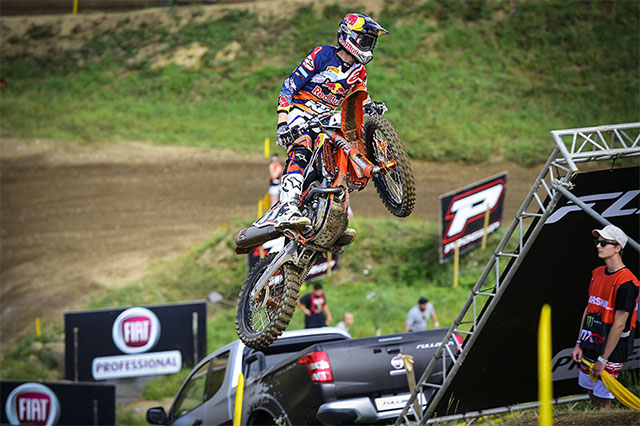 Pauls Jonass will start from pole in MX2
Jonass is not exactly a fan of the hard-pack, but he‰Ûªs improved ten-fold over the last twelve months and he managed keep on Ferrandis, who is far from a slouch on this sort of terrain. While it looked as though Ferrandis had it all under control, he got a bit hung up behind a slower rider on the final lap, which opened the door for Jonass to sneak up the inside. Jonass was late on the brakes and tagged Ferrandis who went down as a result. With only half of a lap to go at that point, it was enough for Jonass to go pole for the first time this year. Ferrandis on the other hand, was lucky not to stall his engine and managed to hold onto second.

Meanwhile, at the start of the race Anstie looked interested but couldn‰Ûªt maintain the pace of the two front-runners, Ferrandis and Jonass, and soon fell off the radar.

Choosing to use tear-off‰Ûªs with rain on the horizon isn‰Ûªt really the smartest choice, as Max Anstie found out when he ran out of tear-off‰Ûªs half way through the race. The ‰Û÷99‰Ûª ditched his goggles and squinted his way around the skating rink, or motocross rink of Loket, which slowed him down enough for Team Suzuki World MX2‰Ûªs Jeremy Seewer to find a way through for third.

Mewse sensed an opportunity to challenge his teammate for fourth and did a good job trying to take the spot but unfortunately came up slightly short and had to settle for fifth, which is his best Qualifying Race result in his MX2 career.