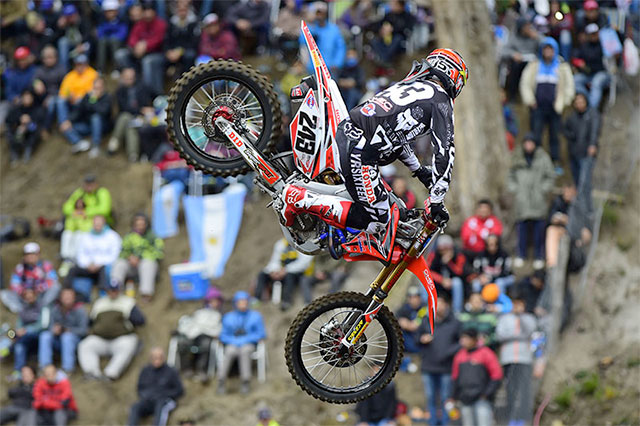 The opening laps of the MXGP Qualifying Race for the MXGP of Patagonia Argentina were some of the most epic and action packed laps that we‰Ûªve ever seen.

Coldenhoff took a cruddy line a few turns in and was dropped back to fourth by Cairoli, Gajser and Febvre, in that order. Bravely Febvre got on the rear wheel through the waves and launched between Cairoli and Gajser to take the lead for half a breath before getting passed by Gajser. Gajser‰Ûªs move up the inside of Febvre pushed the Frenchman wide, which allowed Cairoli to capitalize but as expected there would be no rest for the wicked thereafter.

Also adding to the craziness of the opening lap, the pace setter in Timed Practice, Team HRC‰Ûªs Evgeny Bobryshev crashed and left Monster Energy Kawasaki Racing Team‰Ûªs Clement Desalle with nowhere to go but straight into him and over the bars.

Meanwhile, Cairoli got a little loose on a slick spot with Febvre hot on his heels. Febvre was committed to his line and had nowhere to go except straight into the side of him, which put both on the deck. Coldenhoff then took second place but found himself feeling the heat from Monster Energy Yamaha Factory Racing‰Ûªs Jeremy Van Horebeek and Rockstar Energy Husqvarna Factory Racing‰Ûªs Max Nagl, who both pulled the trigger in the laps that followed.

Nearing the end of the moto, it was Romain Febvre who had everyone saying, ‰ÛÏWait! What?‰Û 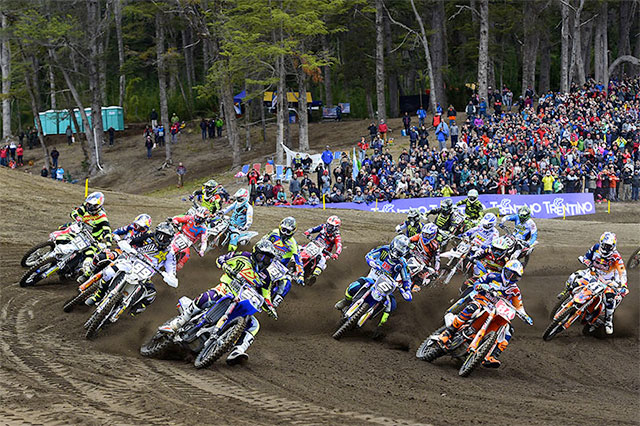 Jeffrey Herlings leads the MX2 class through the opening turn. Credit: MXGP
In the MX2 qualifier the roar of the rowdy crowd when the gates fell was off the scale as Wilvo Standing Construct Yamaha Racing‰Ûªs Aleksandr Tonkov led the way around turn one. As expected, Jeffrey Herlings wasted no time in twisting his right hand and took the lead almost instantly.

A turn of luck for Anstie, who was cartwheeling all over the place at the last round in Valkenswaard, inherited fourth. Jonass then buried the front of his KTM in the volcanic loam and handed the Brit third, and as if that wasn‰Ûªt enough, Tonkov did the same thing a lap later, which escorted him into second.

In the latter stages of the race most of the riders had settled into their positions, except for Jonass who managed to muster a final surge of energy to pass Anstie on the last lap. Herlings threw a tidy whip over the line to celebrate his fourth consecutive pole position while Jonass came home in second ahead of Anstie, Tonkov and Team Suzuki World MX2‰Ûªs Jeremy Seewer.