Frustration for Pata Honda in France 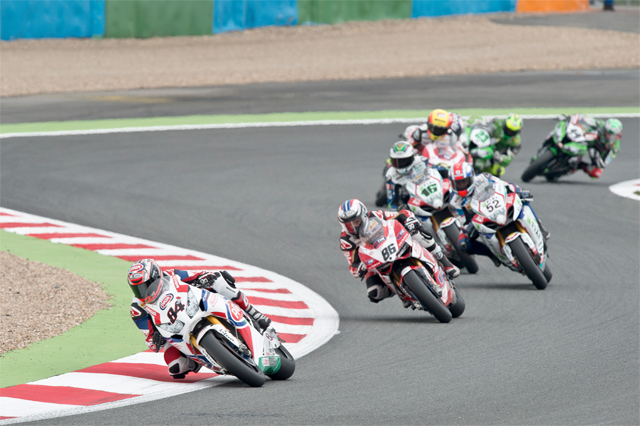 With rain affecting much of the practice sessions at the 4.411km circuit, dry track time had been limited over the weekend, but the rain was kept at bay for race one. Starting from 15th on the grid after crashing during yesterday‰Ûªs Superpole, Haslam finished in eighth position, one place behind his team-mate.

Both riders were forced to retire from race two with technical problems as series leader Tom Sykes took his second win of the day.

"There have been some positives this weekend and I was able to understand a little more the engine brake characteristics of the CBR." Fabrizio explained. "I was happy with a second row start after qualifying yesterday and the first race was not so bad, although I found it difficult to turn the bike when the grip levels dropped.

"Race two was disappointing but we don‰Ûªt yet know what happened to make the bike stop," he added.

Leon Haslam's was also upbeat about the progress made by the team and himself despite the mechanical issues in race two.

"Yes, we had a technical problem in race but I‰Ûªm actually really, really happy that we‰Ûªve found an important aspect of the bike that has been wrong for many races." Haslam stated. "We changed that part for race two and it transformed the bike.

"It turned properly and did everything that it should have been doing for the last few rounds. It took a lot of inconsistency out of the bike as well.

"Starting from 15th wasn‰Ûªt ideal but, even though our setting didn‰Ûªt suit the big change we made, I was quickly able to get up to seventh and was catching the guys in front," he concluded.

Top Image: Michel Fabrizio continues to improve at each outing aboard the Pata Honda