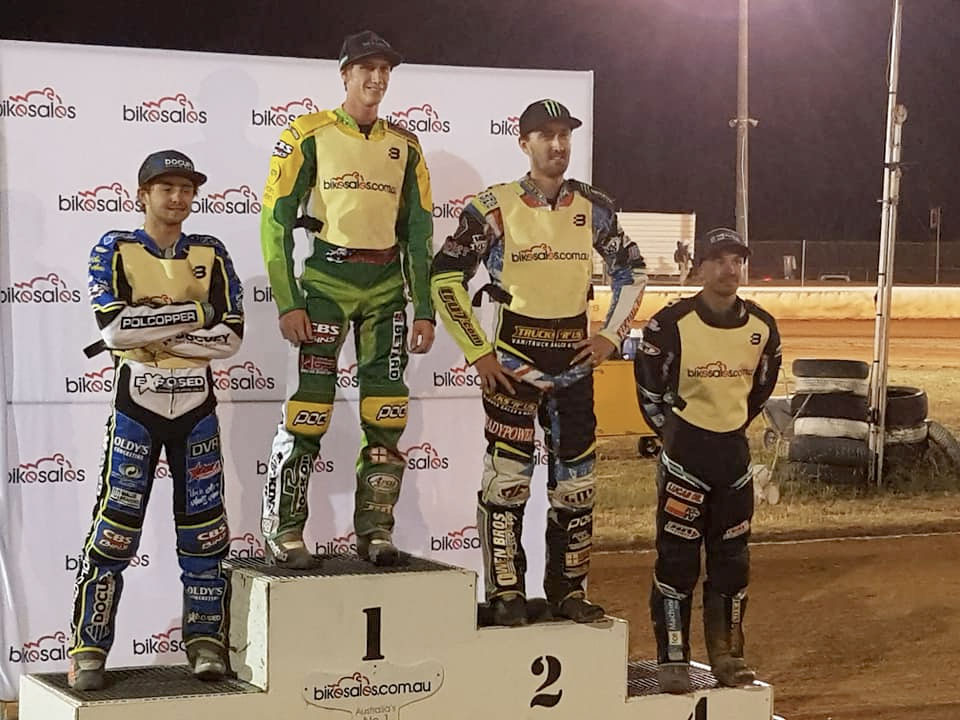 In an evening with plenty of unexpected wins and crashes, Fricke took out top position overall with a lead ahead of Holder by three points!

As the sun set in the Goulburn Valley, Victoria, spectators were treated to a star-studded first four heats that saw Jack Holder go up against Fricke, Chris Holder up against Tungate, Brady Kurtz up against Sam Masters and Jaimon Lidsey against Justin Sedgmen.

Sitting pretty in sixth position overall now in the 2019 Championship is Masters with a total of 29 points. Masters ran a strong campaign in Round 3, with one win two seconds, and two third place finishes. Sitting in fifth position ahead of Masters, also on 29 points, is Brady Kurtz who took out first place in his first heat, but cooled off across the remainder of the evening, with two second place and two third place finishes.

Jack Holder now sits in fourth position overall in the Championship, with 31 points. Holder battled through his competition to take out one win, three second places and a third during his heats, which qualified him into the B Final. Up against Tungate, Nick Morris and Sedgmen, Holder had a difficult run, crashing early in the race. Thankfully unhurt and as determined as ever, Holder returned to the start line to finish the B Final in second place hot on the heels of Tungate.

Now sitting on a total of 41 points and in third place in the 2019 Championship, Tungate blazed a trail throughout his heats, coming out on top with three wins and two third place finishes. After an exciting battle with Jack Holder right to the finish line in the B Final, Tungate took out the last spot in the A Final. Facing fierce competition against Fricke, Chris Holder and Lidsey, Tungate crashed out in lap one and did not return to compete in the re-run. Motorcycling Australia is pleased to confirm though that Tungate remains uninjured and will be raring to go in Round 4 tomorrow!

With a total of 45 points under his belt, Chris Holder now sits comfortably in second position in the Championship. Round 3 was a fantastic evening for Holder, who proved why he was the 2012 FIM Speedway World Champion, taking out two wins and three second places finishes. Holder‰Ûªs efforts yesterday automatically qualified him into the A Final, where he tangoed with Fricke across all four laps to finish in second place. No doubt Round 4 will see Holder push himself and his bike as he itches for the winning feeling once again.

Remaining cool, calm and collected throughout the entire evening, Fricke took out first place overall in Round 3 with a staggering four wins and one second place finish! Fricke now sits atop the Championship leader board ahead of Holder on 48 points! Living up to the coined phrase ‰ÛÏno brakes, no gears, no fear‰Û

Watch: Re run of the A final.