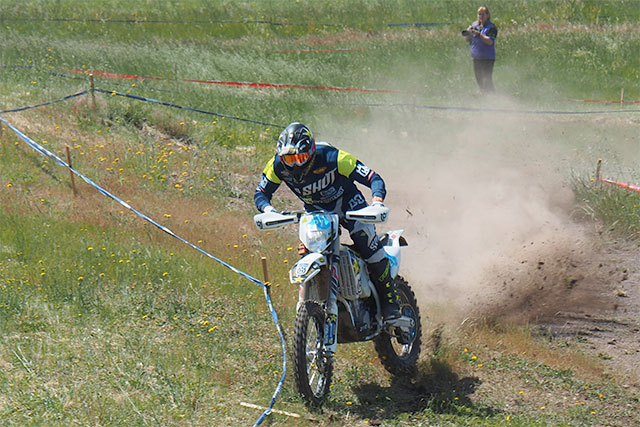 It was the perfect start to the 2016 Yamaha Australian Four Days Enduro (A4DE) this morning, with the sun shining over the Merrijig location, and anticipation in the air for Prologue today that would determine their starting positions for the remainder of the week.

Before the beginning of Prologue today competitors had a chance to pre-ride two of the trails and tests that will be used over the coming four days, before their timed lapped around a Motocross styled track.

Milner was first in and first out in today's timed test however in an unanticipated turn of events it was the French Husqvarna mounted Mathias Bellino who finished one second ahead of closest rival CDR Yamaha‰Ûªs Chris Hollis in the times.

Bellino finished the dusty and dry track in 2 minutes and 12.836 seconds, while Hollis finished the test in 2:13.880. Phillips pushed his Sherco machine in fighting fashion to secure a third placed start against the remaining E1, E2, E3, Women‰Ûªs, Vet‰Ûªs and Masters competitors.

Veterans competitor Dylan Rees finished with the 16th fastest time today after his lap time of 2:18.958, while Active8 Yamaha Yamalube‰Ûªs Tayla Jones, back and ready to impress, finished 34th and was the first women in the times with a 2:23.095. Masters competitor David Flemming was the top rider setting a fastest time of 2:26.464.

Due to the nature of the event the top three riders Bellino, Hollis and Phillips will all start on the same minute tomorrow Wednesday the 16th of November for day one of the 2016 Yamaha Australian Four Days Enduro in Merrijig, Victoria.

*All results are provisional