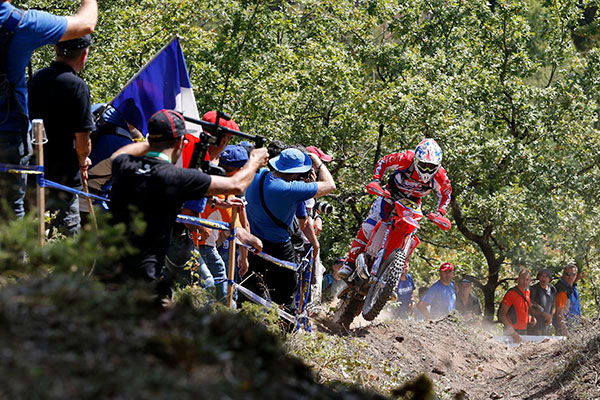 The cancelled British Enduro GP will now take place at MÌ©thamis, France on the same dates and same format.
Upon the announcement of the cancellation of the Hawkstone Park Enduro GP set for September 22/23, Bastien & Alain Blanchard of ABC Communication, with the support of the FIM and the French Federation of Motorcycling (FFM), went in search of a replacement race.

And where could be better than France for that?! With the support of Greg Gilson on behalf of G-Project, an alternative was found with the Moto Club Mazanais (84 - Vaucluse) which has, for more than 25 years, been organising an Endurance gathering with more than 320 riders! After visiting the venue, Moto Club President Billy Richard and ABC Communication agreed on the race date and format.

This Grand Prix of France will therefore take place on the original dates of September 22nd and 23rd, and will resume the same format: Enduro Sprint on Saturday, Cross Country (2hrs 30mins) on Sunday. Junior and Youth will also be racing there. The Moto Club Mazanais will at the same time keep its popular 'Endurance of MÌ©thamis' race where more than 300 participants are expected in addition to the stars of EnduroGP!

"After the completely unexpected cancellation of Hawkstone Park, we quickly looked for an alternative, and we can only thank Greg Gilson and the Moto Club Mazanais who agreed to take this opportunity," Bastien Blanchard explained. "It's a big challenge to organise a round of EnduroGP in less than 4 months! That's also why we wanted to keep the same race format as in Great Britain as it's much less binding than a traditional Enduro in terms of permissions, authorisations and logistics.‰Û