Team France will have first pick of the gate for tomorrow's MXoN final after both Romain Febvre and Gatuier Paulin finished 2nd in their respective MXopen and MXGP races, while THE Netherland thanks to Jeffery Herlings MX Open race win combined by Brian Bogers MX2 3rd place will have the second pick.

In a great effort the Australian team finished qualifying in 3rd positions.

Dean Ferris opened proceedings with a fine 7th place finish in the opening MXGP race, before Hunter Lawrence grabbed the holeshot in the MX2 race and looked like he would take the win before American Zach Osbourne caught and passed him on the final lap as the duo finished 23 seconds ahead of the field.

With the Australian's already set for a top 3-5 qualifying position, Kirk Gibbs ensured it was a top three when he finished a fantastic fourth in the MX Open race. After a good jump, Gibbs pushed his way forward through the first turn and made his way into 4th by the second turn and held strong all race.

Team USA finished the day in 5th after Osbourne's MX2 win, while the host nation Great Britain rouned out the top five. 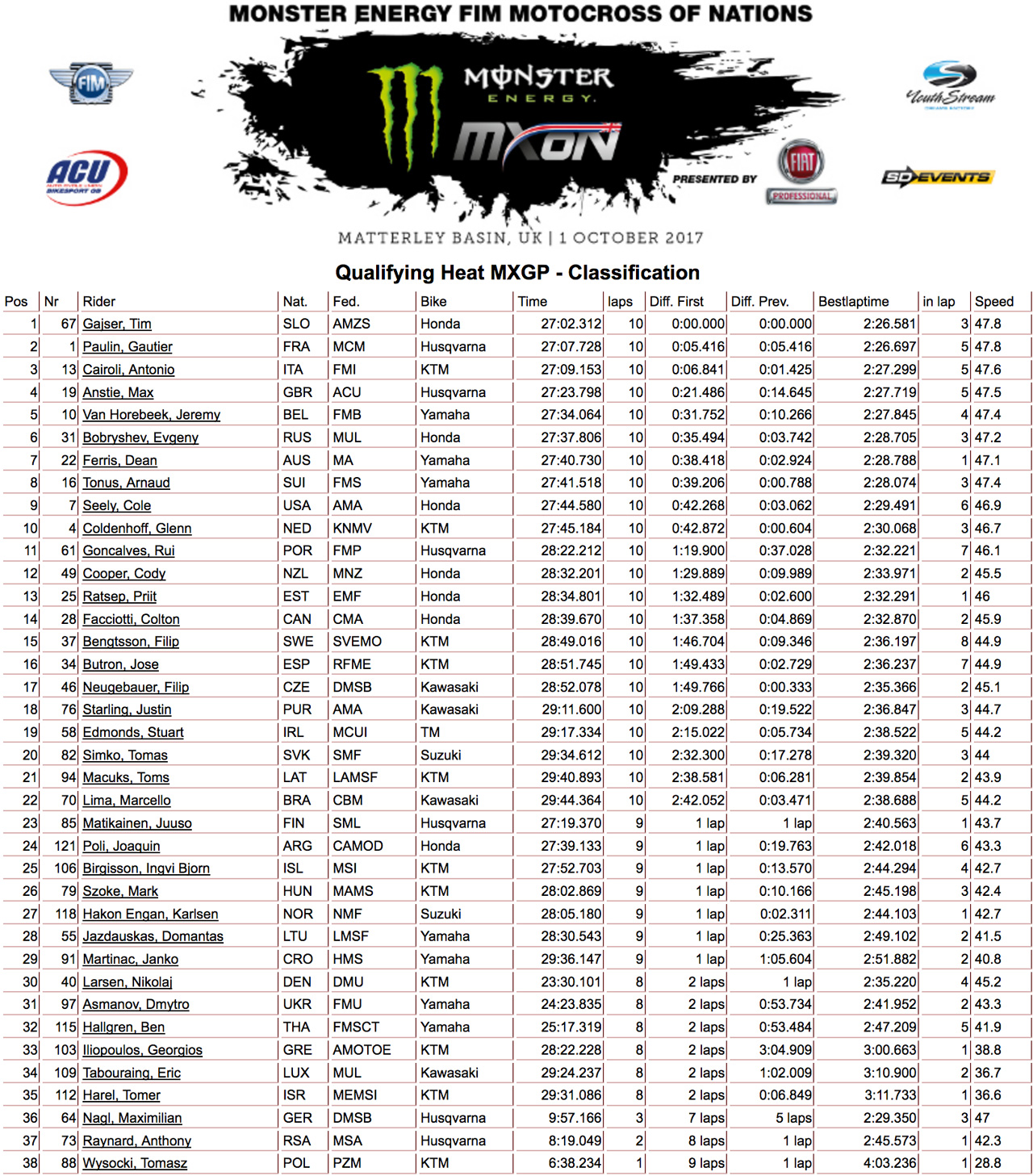 The first Qualifying Race of the day was that of the MXGP class with the vibrant crowd roaring in the background. When the gate dropped Team Germany‰Ûªs Max Nagl took the holeshot but it wasn‰Ûªt long before he was passed by Team Slovenia‰Ûªs Tim Gajser.

Following the moves of Gajser and making their way past Nagl was Team France‰Ûªs Gautier Paulin, Team Italy‰Ûªs Antonio Cairoli, Great Britain‰Ûªs Max Anstie, along with a handful of other riders. For Nagl the race didn‰Ûªt get any better as he would continue to drop positions then fall and pull out of the race.

Back at the front Gajser was in a race of his own leading by a substantial margin. In second was the Frenchman Gautier Paulin but behind Paulin was an epic battle between Max Anstie and Antonio Cairoli. The pair of Anstie and Cairoli duked it out for the majority of the race with Cairoli leading the way more often than not. Anstie on lap 8 of 10 took the spot from Cairoli with an amazing move around the outside coming into a turn. However Cairoli responded shortly after taking the spot back and while Anstie remounted a charge he collided with a lapped rider over a jump.

At the finish it was Slovenia‰Ûªs Tim Gajser ahead of France‰Ûªs Paulin, Italy‰Ûªs Cairoli, Great Britain‰Ûªs Max Anstie (who recovered quickly from his fall), Belgium‰Ûªs Jeremy Van Horebeek, and Russia‰Ûªs Evgeny Bobryshev. Team USA‰Ûªs Cole Seely finished 9th in his first Motocross of Nations race of any type.

‰ÛÏThe track is really good, I‰Ûªm enjoying it. I had a really good start, I was second and made a quick pass to get into the lead, made it happen and controlled the race. I‰Ûªm really happy that tomorrow we will be in the final.‰Û 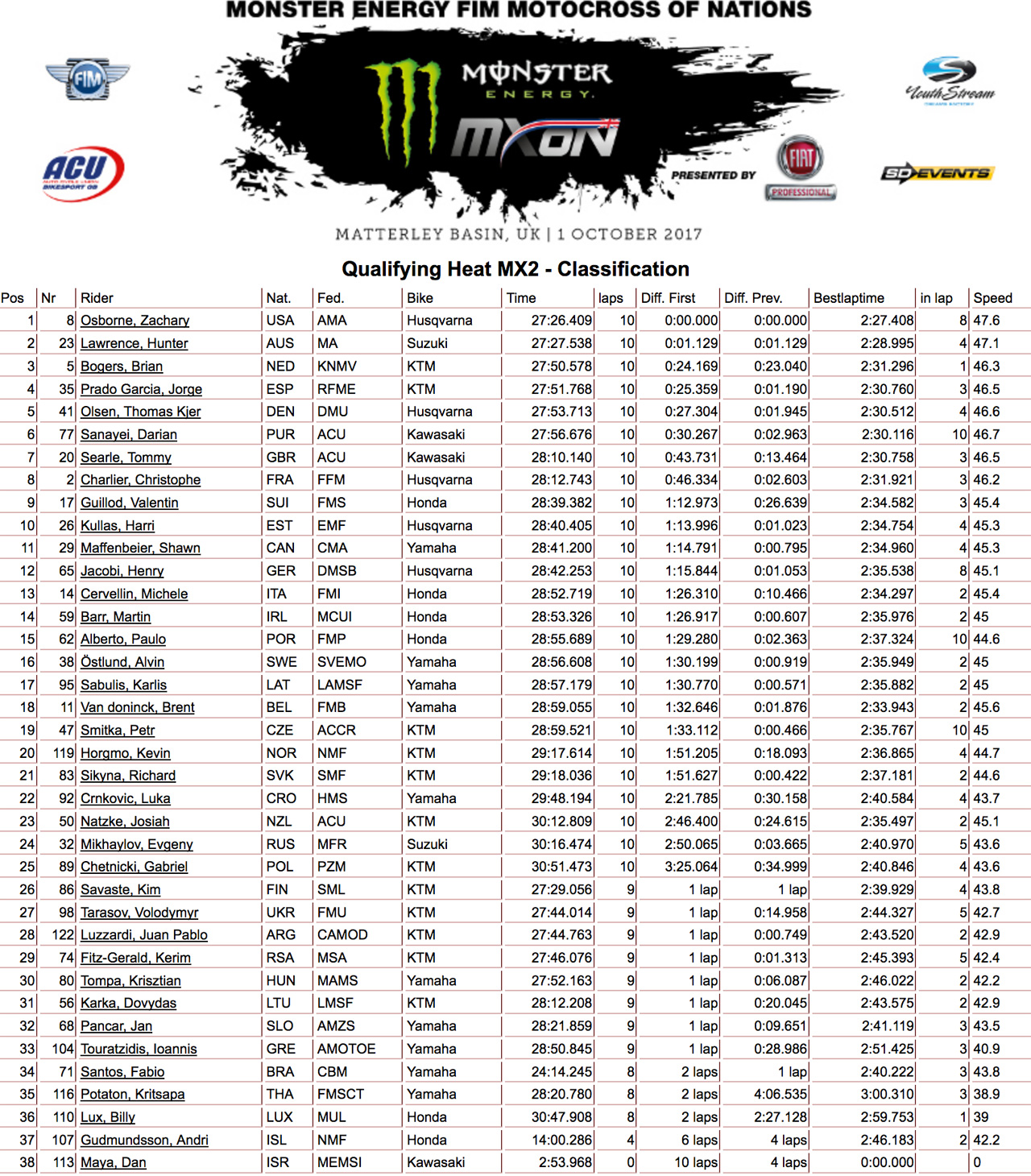 Following the MXGP Qualifying Race was the ultra competitive MX2 version. Team Australia‰Ûªs Hunter Lawerence started the race perfectly as he took the early lead and holeshot after his 2nd gate choice.

From the 37th gate pick team USA‰Ûªs Zach Osborne would come out of the first corner around 16th but by the end of the first official lap he made his way to 6th. Meanwhile Team France‰Ûªs Christophe Charlier registered 5th on the first lap and did well to maintain his position only loses three spots by the finish including on to Osborne.

Osborne wasn‰Ûªt in 5th for long though as he passed Great Britain‰Ûªs Tommy Searle on the same lap as Charlier. Osborne continued his charge and caught up to the #35 of Jorge Prado who he cooly passed on his way through the uphill roller section. One lap later Osborne made it by Bogers for second but was still 11 seconds behind Lawrence who led.

For the next 5 laps Osborne chipped away at the lead eventually catching Lawrence but when he tried to pass the Australian responded and held the position, not letting off the throttle. The pace of Osborne proved to be too much for Lawrence in the end however as the American took the lead for the race win on the last lap.

‰ÛÏIt was tough, we had 37th gate pick and I didn‰Ûªt make the very best start with that pick." Osbourne said. "I think I was maybe like 25th or 23rd when we came out of the first corner and I made some passes on the first lap.

"Even when I got into second I didn‰Ûªt think it was possible to catch him but I just started to put my head down and he started to make some mistakes and I won." 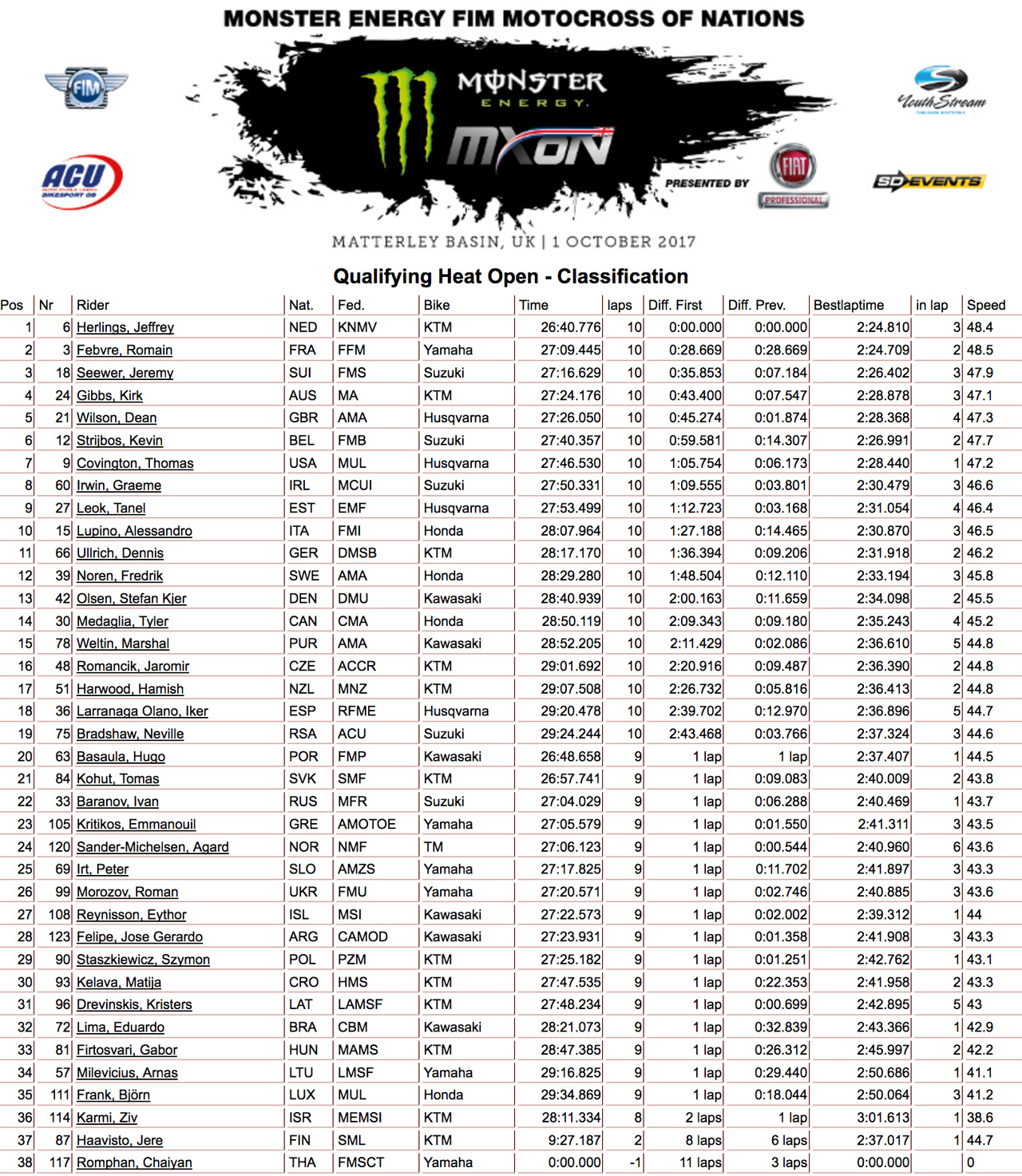 The open class was last chance that the teams would have to qualify directly into the final tomorrow. Taking an impressive holeshot was the rider new to a 450, Team Switzerland‰Ûªs Jeremy Seewer.

While Herlings pulled away with the lead Romain Febvre kept him honest and showed he wasn‰Ûªt far off the pace. As Seewer and the rest of the field lost touch with the top two, Dean Wilson was applying pressure to another 450 rookie, Thomas Covington.

Team Belgium‰Ûªs Kevin Strijbos started the race around 10th but was making his way forward to catch the battle of Covington and Wilson. Wilson looked to have made the move on Covington on lap 5 but Covington held his own a rallied back. Later however Wilson made his way through and so too did Strijbos.

At the finish Jeffrey Herlings, who took the win nearly 29 seconds ahead of second place, Romain Febvre.

‰ÛÏObviously we did a pretty good job with qualifying second, it‰Ûªs a shame we didn‰Ûªt win qualifying but still it is all about tomorrow." Herlings said. "I think my teammates did a good job, I think Glenn was a bit off today but you know tomorrow if he gets a good start he can regroup himself and Brian did a really good job and rode to the maximum.

"There is a lot of good guys in all three of the classes so it is going to be tough and I was happy about my riding today.‰Û