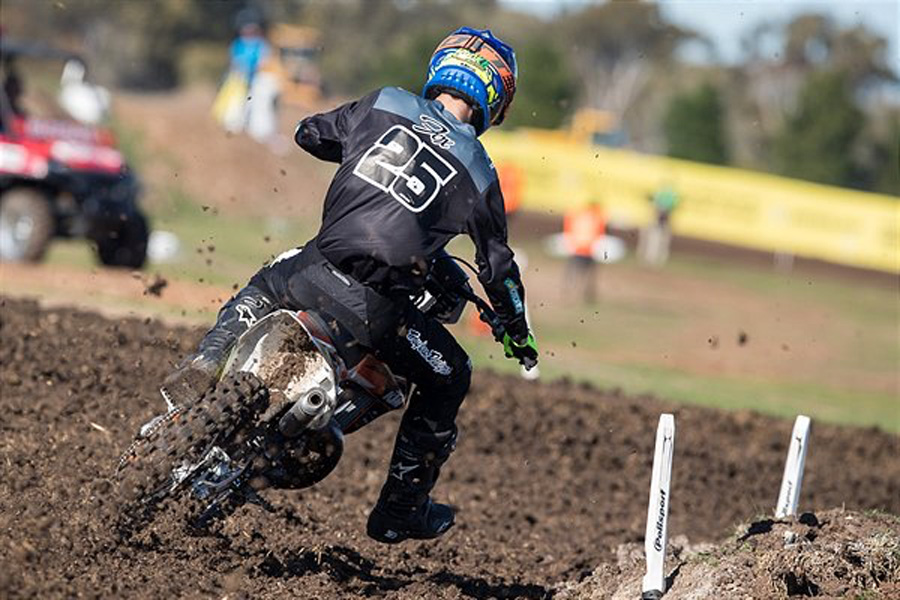 Blake Fox on his way to winning the 125 class at this years two stroke nationals
Blake Fox, Hunter Collins and Ky Woods have wraped up their respectice class championships in the inaugural Yamaha bLU cRU 2-Stroke Nationals series, which wrapped up with the third and final round in Canberra, ACT, on Sunday, 28 April.

The 125cc Junior Cup title was captured by KTM Junior Motocross Racing Team's Blake Fox aboard the KTM 125 SX after he won all three motos at the finale. Fox, 15, also won Traralgon's opening round and then had placed second behind Yamaha's Alex Larwood at round two in Coolum.

"I'm definitely happy to win this title because it wasn't easy, going into the final round tied on points for the lead in the series. I was able to deliver what I wanted to at the final round with the win and overall the series has been positive for us because the longer motos are good preparation for the worlds this year."

In the 85cc Cup, second overall in Canberra was enough for 14-year-old Hunter Collins to take the title. Despite a major fall in moto one, Collins bounced back to win the second race and then brought home the title with P2 in race three. Hunter Valley Motorsports-supported Collins was the winner of rounds one and two to begin the season.

"I liked the 2-Stroke Nationals a lot and it was really good to win the title. My aim was to win the championship, so to be able to do that was a really good result especially after I crashed in the first race on the weekend. I did what I had to do, which gave me second on the day and that was enough to take the title."

Ky Woods clinched the 65cc Cup remarkably winning each of the three rounds overall and topping all but one moto contested throughout the series. The talented 12-year-old rides with the support of Sutto's KTM.

"It's pretty awesome to get all of the wins over the three rounds, so I'm really happy to be able to do that. I really liked the Coolum round, which was so rough and the competition was high there, but then Canberra was good as well because I really wanted to win all of the rounds. I tried my best and am really happy!" Woods concluded