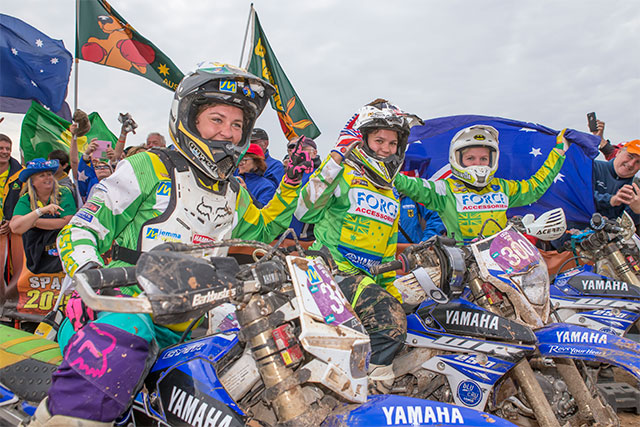 The Yamaha Blu Cru Women‰Ûªs Trophy Team have recently claimed their fourth consecutive world title winning by almost four minutes at the 2016 International Six Days Enduro event in Navarra, Spain, which was held over the week beginning 11th and concluding 16th of October.

The Yamaha team, spearheaded by three of Australia‰Ûªs finest Off-Road riders, Tayla Jones, Jessica Gardiner and Jemma Wilson, have shown exactly why Australia is the nation to beat after a stella performance secured their fourth title.

The International winning team finished with a total time of 7 hours, 57 minutes and 39.29 seconds over second place Spanish rivals finishing with a time of 8:01:27.96, and third placed competition, Germany, with just over 18 minutes behind with a time of 8:15:47.75.

Despite a week that was less than ideal for Jessica Gardiner starting off day one of the event with a DNF, she put that behind her, battled through the flu and secured herself a fantastic 17th overall placing for the six days with a total time of 6 hours 16 minutes and 40.3 seconds individually. Gardiner finished the final Moto of the event in 7th position ahead of team mate Jemma Wilson who finished 9th in the event.

‰ÛÏHere we are, we are currently four-time World Champions with team Australia. It‰Ûªs great to have Jemma Wilson, Tayla Jones and myself as the three chicks that have done it four years in a row," Gardiner said.

"It has been really great with the whole of team Australia behind us. We wouldn‰Ûªt have been able to do it without them, plus the supporters and the whole crew. It‰Ûªs a big effort to get Australia over here and it definitely doesn‰Ûªt go unappreciated. It has been a pleasure to ride with the girls these last four years as this year was one of the most exciting in women‰Ûªs racing that I have seen yet.

"We had some tough competition and many of the girls were strong, and very well-known riders. We didn‰Ûªt have much time for errors, and although I made a small error on day one I am really happy to be able to come back strong. It‰Ûªs a little disappointing on my individual results but as a team I couldn‰Ûªt be happier being on that top step. It‰Ûªs an honourable feeling to hear that national anthem playing and Australia cheering us on. I would like to especially give a big thank you to Yamaha Blu Cru. It‰Ûªs a very special moment," Gardiner concluded. 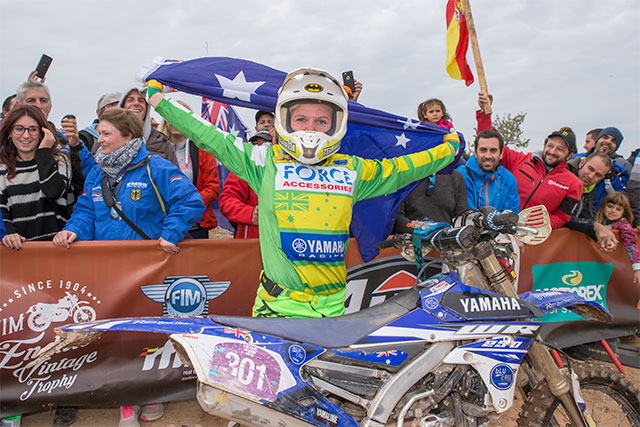 Tayla Jones. Photo: John Hamilton/Mad Dog Images
Tayla Jones shone throughout the week as a force to beat with a hard charging approach to the competition. After an injury interrupted her Australian Off-Road season, this was one of the first events Jones has competed in since. Time off the bike definitely didn‰Ûªt hinder her performance this week winning the final Moto of the event. With her success on the bike Jones concluded the ISDE in 3rd outright, with a time of 3 hours 54 minutes and 25.3 seconds, just behind German and Spanish rivals.

‰ÛÏI am pretty stoked to get our fourth world title," Jones enthused. "It was a lot harder this year with many good riders in the mix. We stayed consistent the whole week and Jess, Jemma and I rode well the whole time.

"I got the final Moto win today which has just topped off my whole week, I am stoked to just get another win in the books. Jess and Jemma are awesome team mates, we have done it for four years now and I couldn‰Ûªt ask for a better couple of girls to be racing with. We are very supportive of each other and just want to make sure we all finish safely. It‰Ûªs awesome having those two on board. Lastly thank you to everyone who has helped to get us over here, Yamaha especially for their help." 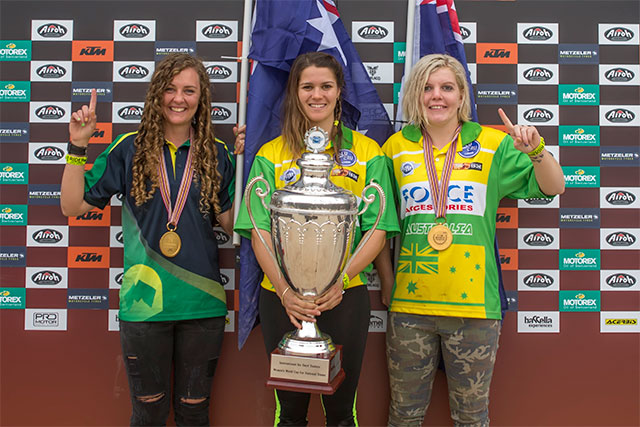 From left Jemma Wilson, Jessica Gardiner and Tayla Jones. Photo: John Hamilton/Mad Dog Images
Jemma Wilson rounded out the third position on the Yamaha Blu Cru Women‰Ûªs team and by equal measure was a key contributor to the overall success of the Australian Women‰Ûªs team this year. Her performance on the bike secured her a final outright placing of 5th in the women‰Ûªs division only just missing out on a fourth placing by a mere second (4:06.51.9).

‰ÛÏThe week is now over and it was my sixth Six Days, and my fourth in a row World Championship. It was super cool this year to get the win," Wilson said. "There was a lot of competition from Germany, Spain and America as well. There was a lot of good riders this year opposed to the last few years where we sort of knew we would win unless some big drama happened.

"It is much better to get a win that we had to fight hard for and work for it. Personally, it wasn‰Ûªt my best six days, I have been riding really well all year and then this entire week I just felt flat. Even when I thought I put in a good time I would look back and think ‰Û÷oh it‰Ûªs another bad one‰Ûª. I lost fourth place in the final Moto by eight seconds and personally finished fifth overall.

"Jess and Tayla both worked really hard the whole week for the times we got. Well done to Motorcycling Australia and all the helpers. Its a huge effort to get to the six days from day one to now, so thank you to everyone. Thank you to Yamaha and everyone, and we will be looking to get a fifth one in France.‰Û 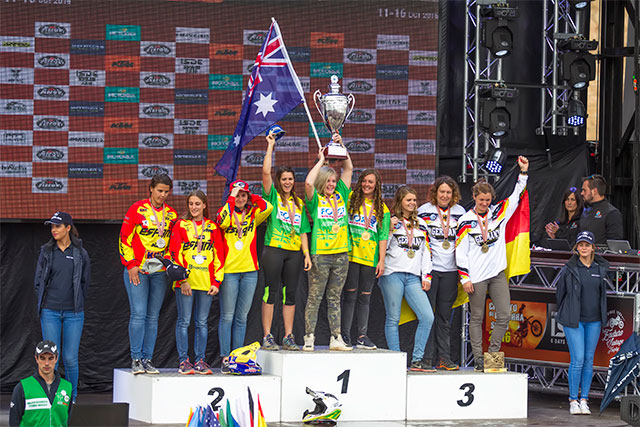