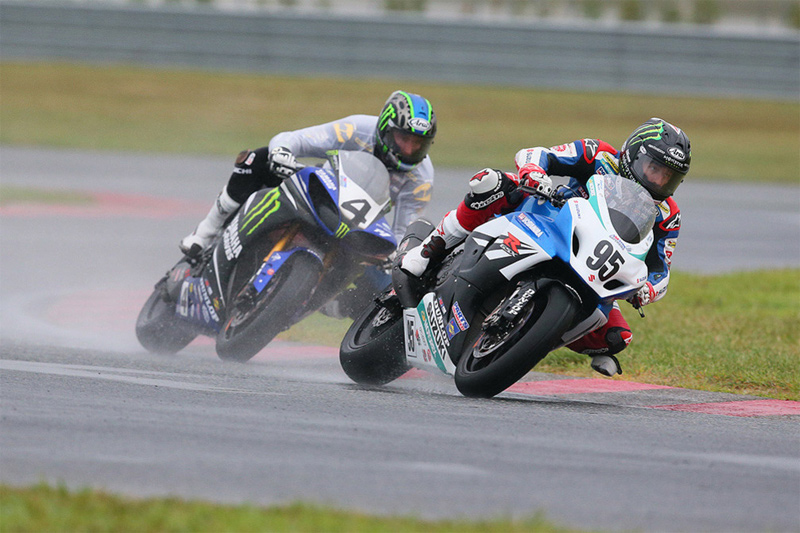 Faced with treacherous wet conditions, what seemed like a relatively simple task for a rider of Hayes' caliber - third or better to clinch the crown - became significantly more complicated.

However, rather than go the conservative route, Hayes waged an intense duel for victory with Hayden.

The slick conditions caught several riders out. Hayden's teammate, Martin Cardenas, crashed from the lead on lap 7 of 23. Proto-Tech Spain's Bernat Martinez challenged for first himself before the Spaniard crashed out of contention as well on lap 10.

Newly-crowned Canadian Superbike champion Jodie Christie crashed out of third on his Honda Canada/Accelerated Technologies CBR1000RR on the race's second lap. And Hayes' teammate and title rival, Cameron Beaubier, fell in the opening laps while running in the top five, leaving just Hayes and Hayden to decide the victor.

The two lapped their way through the field, ultimately putting every rider not on the podium a lap down as they challenged each other's skill and bravery.

The two traded the top spot multiple times on the final laps. Hayden, who came into the race dinged up after injuring his shoulder in a testing crash, looked to hold the advantage with just a single corner to go. However, a single mistake was all Hayes needed and the Mississippian pounced. Hayes blasted past Hayden, who spun up the rear while trying to get on the power, just feet ahead of the checkered flag.

However, Hayes was later hit with a penalty for passing under yellow during their shootout, dropping him to second in the final results and elevating Hayden to first.

Hayes is just the second rider in AMA Pro SuperBike history to earn four titles, joining seven-time champ Mat Mladin in that accomplishment. Throughout the season Hayes demonstrated his superiority in multiple conditions and will be reunited with the No. 1 plate.

"I had so much fun riding today," the champ said. "We don't get to go splish-splashing that often. Roger was riding so good, I was throwing everything I had at him. Unfortunately he spun up on the front straight away. I was able to get the R1 hooked up and across the line. I'm really proud of my team. Four championships in six years ain't so bad.

"I feel so lucky that I'm 39 years old and have a place that I call home. These guys are so good to me. If I'm riding motorcycles and winning races I'm a pretty happy guy. All the other things that come along with that are bonuses. I'm excited that I can be a four-time AMA SuperBike Champion and I will do everything in my power to continue that."

"It's not really the way I'd like to win them but I do remember at that point in the race the waving yellow when he came by me in Turn 1," Hayden said. "I rode hard enough and good enough to win so I feel good for me and team. We didn't want to let Yamaha sweep the whole series this year so we're excited about that. Hopefully we'll get one without any controversy tomorrow."

Foremost Insurance Pegram Racing's Larry Pegram was the last rider on the lead lap and that was good enough to earn him third on the day.

"I don't think I've ever went that slow and got third in my life," Pegram joked. "Once I got up to third and I was running a fairly good pace, they showed me plus-20 and my guys were telling me to slow down, but I couldn't go any slower! That was one of the most treacherous rain races I've ever ridden. There just wasn't any grip. It was a good day for us. When the rain came, I knew we could be competitive."

Vicious Cycle Racing's Sean Dwyer came home in fourth while Beaubier remounted and worked his way back up to fifth.

With the championship in the books, Hayes will be free to let it rip on Sunday in the 2014 season finale.

The Yamalube/Westby Racing pilot outlasted his rivals and the weather to take the victory after he'd earned his first career pole earlier in the day. Jake Gagne finished second and clinched the championship for the RoadRace Factory/Red Bull team, taking the checkers in front of Jake Zemke.

Westby zipped to the lead in the restarted race and motored away, even as the rain increased during the 16 laps.

"I am ecstatic ... over the moon," said Westby after his third win of the year. "I knew that Jake was going to be big competition. It was pretty hairy. The rear end came around on me two corners from the end of the race. It was extremely treacherous. Someone was saying I have won more races in Daytona SportBike than anyone else in the class this year, so that was interesting. I am really looking forward to getting one more chance at things tomorrow."

Westby's third win of the year is more than any other rider in the class.

Gagne earned the title when he finished second and rival Jake Lewis retired from the race with electrical problems. Gagne charged up through the field and held second after passing Zemke.

"It's incredible and the last thing I thought was to have this thing wrapped up today. I saw (Lewis) wasn't on the grid. The race was tough," said Gagne, "and the year was great. It was my third year on the team and they are the hardest working group of guys I have seen. I don't really know what to say ... I am ready to get on with it and race again tomorrow."

Zemke, on the GEICO Motorcycle Racing entry, earned his first podium of the year.

Only nine riders finished the event as heavy attrition made the 16 laps seem longer - at least for Westby and Gagne.

Gillim took a bold approach to the difficult conditions at the beginning of the race, taking the holeshot over fast local ace Mar Del Racing's Mark Miller, Jr. and the polesitter, HSBK's Dustin Dominguez.

Gillim did relent the first position for a time, but the points leader rallied to take back the lead before the rain increased and the race was stopped after a crash.

"I wasn't worried about the weather too much. I was worried about the gap back to Dustin," said Gillim. "The red flag was out and it must have been pretty bad. I know tomorrow is going to be hard because Dustin is so quick and this being a wet race, it didn't help our dry setup t all. We're going to be fighting as hard as we can for these precious points."

Dominguez took second place on the day, having run down Miller before the stoppage as he continued to build his pace after what the Oklahoman described as a too-cautious start.

Gillim and Dominguez will settle their championship battle with tomorrow's finale.

Wyatt Farris was classified fourth even though he had fallen on his Celtic Racing/HVMC-backed Suzuki as did several members of the group fighting for those positions. Justin Jones (Showtime Inc.) and Richie Escalante (Escalante Racing) also fought for the position.