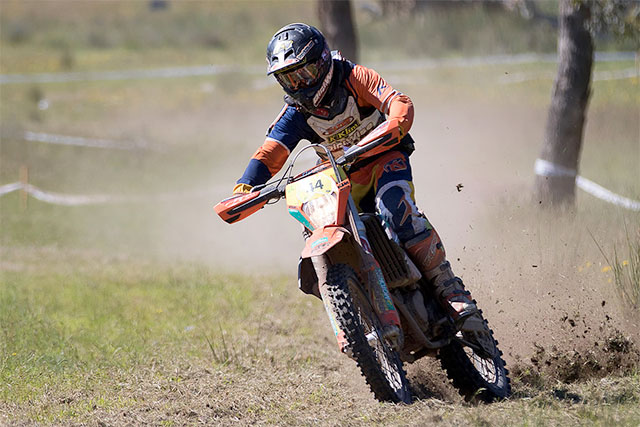 Former World, ISDE and GNCC Champion Shane Watts made a return to racing in Australia when the, now American based, Aussie hit the trails for the Australian KTM Racing Team at the recent 2016 Yamaha Australian Four Day Enduro (A4DE) at Merijig near Mansfield, Victoria.

The Forty-four-year-old legend, who won the 1997 125cc World Enduro Championship and 1998 World Championship Overall - on a 125, raised plenty of eyebrows by taking his KTM 125 XC-W to the 11th fastest time in Tuesday's Prologue, before bringing the little beast home in 10th in the E1 class.

‰ÛÏIt was great, a spectacular couple of days of riding. I loved it," Watts enthused. "It was a really diverse selection of special tests, but challenged all the riders in the trail was quite interesting. It was a very good event.

"The social side of it was great, it‰Ûªs funny how, 10,15 or 20 years further on you realise the effect that what you once did had on people, It was great to reminisce" Watts said.

Well know as a rider that seemed to never be anything but fully pinned on a 125 in his day, Watts enjoyed stepping back on the screaming little machine for his venture back into the Victorian bush.

"Riding 125 brought back a few memories for people. I was stoked about it. The 125 was so good I had a grin on for the whole event. Just cracking it open and letting it ring out and hearing the sweet sound of that little two-stroke on the hills was brilliant!" Watts concluded.

Watts, originally from Maffra in Victoria now lives in North Carolina in America where he spends most of his time traveling and organising his DirtWise schools and Shane Watts Off Road Riding Academy.