Monster Energy Supercross has entertained millions of fans for 43 years. For the first time in over two decades, the 2018 season will debut an all-new points system to evenly allocate points over all 22 finishing positions. While the gap between 1st, 2nd and 3rd has not changed, the new points system will ensure that the race to the championship will be much more competitive throughout the season as the reward is greater for a better finish.

The elimination of semi races will add further pressure to qualify as riders will have just two chances to ensure a spot in the Main Event through one of two heat races or a last chance qualifier (LCQ). This year, the Top 9 in each heat will qualify directly into the Main Event while positions 10-20 will have one last chance to make it through the LCQ. Previously, only five positions would transfer to the Main Event from the heat races and all others would be transferred to a semi race. Eliminating the semi races will make for longer heat races and last chance qualifiers, allowing for more intense battles on the track from the stars for the fans.

From a fan's perspective, the most anticipated change in 2018 will be the introduction of the Monster Energy Supercross Triple Crown, a three-city showdown hosted at Angel Stadium in Anaheim on January 20, Mercedes-Benz Stadium in Atlanta on March 3 and U.S. Bank Stadium in Minneapolis on April 14 where both the 250SX and 450SX Classes will compete in three Main Events.

Additionally, two 250SX East/West Showdowns will double the excitement in Indianapolis and Las Vegas this season as fans will have the opportunity to see 20 of the fastest riders from each coast (Eastern Regional 250SX Class Championship and Western Regional 250SX Class Championship) battling each other for victory. The Main Event will be the first and only time throughout the night where all of the 250SX Class stars will line up on the gate for a 15-minute plus 1 lap Main Event where winner takes all.

Another dramatic change to the 2018 season includes the addition of four Supercross Amateur racing events at Angel Stadium in Anaheim on January 20, University of Phoenix Stadium in Glendale on January 27, Raymond James Stadium in Tampa on February 24 and Mercedes-Benz Stadium in Atlanta on March 3, which will give amateur athletes in 27 classes their only chance to compete in the same venue on the same weekend as all of the stars of Supercross.

Along with format changes, every track in 2018 will have a distinct personality that tells the story of each city's Supercross history dating back over 43 years.

Fans living in the United States and Canada can watch all of the racing live on the FOX family of networks for the fifth consecutive year (check local listings). 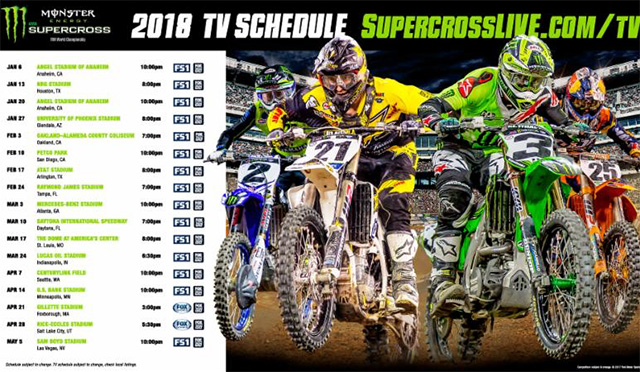