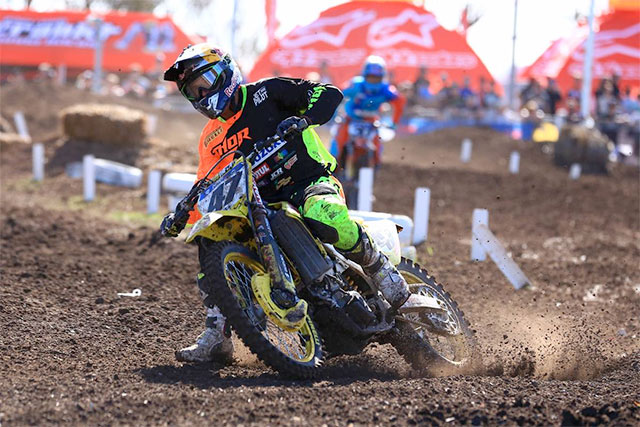 It was an up and down day for Wilson‰Ûªs Coolair Motul Factory Suzuki at round one of the 2016 Motul MX Nationals in Horsham today, with both Todd Waters and Luke Wilson each facing individual challenges throughout the season opener.

With the newly formed race team heading to round one with Waters a clear favourite in the talent packed MX1 class, the Queenslander who has returned from Europe after racing the MXGP for two years, only narrowly missed out on a podium in Horsham due to a flat tyre in the first moto of the day.

Waters who took out an impressive second position in GoPro Superpole, was in the box seat for an impressive result in race one, however a flat tyre in the closing stages of the moto forced Waters to nurse his Suzuki machine to the end of the race, eventually crossing the line in ninth position.

In race two, Waters aimed to leave Horsham on a high, and thankfully the second race of the day handed Waters and the Factory Suzuki team with third position, putting Waters in fifth overall for the round when the points were tallied.

‰ÛÏHorsham was a bit of a difficult track for me ‰ÛÒ it was super hard pack, and I‰Ûªm not known for that ‰ÛÒ but you know we came from bad starts and got in to third both races so overall it wasn‰Ûªt too bad,‰Û