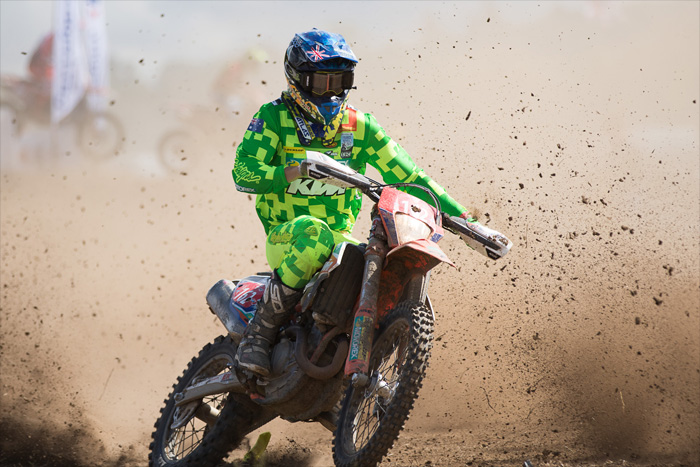 Milner and Sanders helped the Australian World Trophy team to second in the premier international teams competition, behind host nation France ‰ÛÒ which made good every home ground advantage - and ahead of third-placed Finland.

The Aussie trophy team comprised Milner, Sanders, multiple World Champion Matt Phillips, and Josh Green, and won days five and six of the event, but finished just over six minutes in arrears of the French.

KTM‰Ûªs Milner was the Aussies‰Ûª heaviest hitter. As he puts it he and his KTM 450 EXC-F ‰Û÷only‰Ûª topped the world in one special test, but he finished top-ten outright in 22 of the 26 tests across the event, muscling his way to second in the hotbed of talent that is the E2 category.

Milner finished the event in outright fourth place, but after finishing runner-up twice, the man who went undefeated in Australia‰Ûªs premier off-road racing series in 2017 is determined to win an ISDE outright.

‰ÛÏIt‰Ûªs something that I‰Ûªve always wanted to win and been so close to doing in the past, so it was a bit of a bummer to fall as short as I did, but I‰Ûªve got to give it up to the other guys, they were absolutely hammering." Milner reflected. "And I‰Ûªve still got a few more years in me yet...

"Pretty much every day was solid, but on day one I had a big cartwheel in the second enduro test and lost a lot of time. Other than that, we got it happening. It was pretty tight the majority of the time. Throughout the whole six days there was some really close battling, that‰Ûªs for sure. And to come runner up to France at home where the tracks were really set up for them, is kind of a win to us. My bike didn‰Ûªt miss a beat in the whole six days and was pretty much unstoppable, that‰Ûªs for sure. Even when I cartwheeled it pretty hard, I was surprised that I‰Ûªd only bent a few levers.

"The vibe that comes from being in the Australian Team just makes you want to do our country proud. And all the people on social media telling us how proud they are of us, it‰Ûªs not just another race where doing your best is okay ‰ÛÒ you‰Ûªre proud to be there, knowing that you‰Ûªve got so much support over here, and the team riders are all behind each other.

"It was a bummer that some people got lost because it was a real solid junior team and they were winning at the time. But once we got over that it was all fun and it made for a good week. It‰Ûªs renewed my motivation. I‰Ûªm real hungry to win the thing outright, but as a team we want to win it and not have to barge up onto the podium like we did in 2015. We‰Ûªll look forward to Chile and see what happens.‰Û 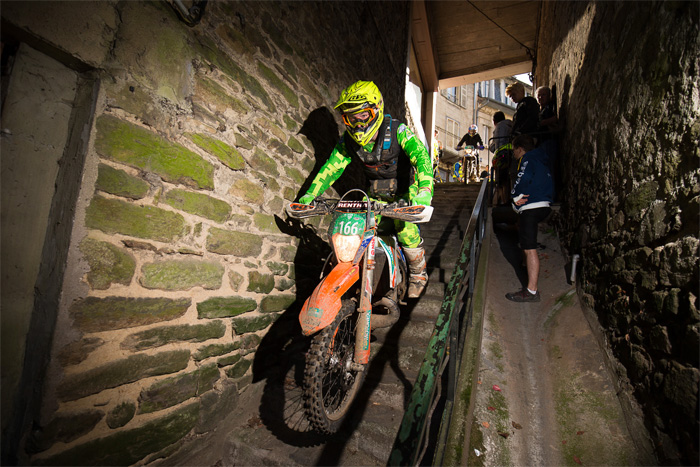 Enduro GP racer Sanders carried the residual effects of an existing shoulder injury sustained at the recent AORC finale, and aggravated the condition in a crash on day four.

Back in the green and gold for the remaining two days, however, he gritted his teeth and piloted his KTM 300 EXC home in 16th place outright, even raising enough spirit to lift himself onto the E3 podium in the final motocross.

KTM Australia‰Ûªs newly-crowned AORC E3 Champion Lyndon Snodgrass was armed with the brand‰Ûªs revolutionary new KTM 300 EXC TPI for the occasion of his very first ISDE, and if the teenager was over-awed at the start ‰Û_you couldn‰Ûªt pick it.

Snodgrass shocked the world by throttling the new KTM to outright victory in the opening special test, after just one day of shakedown prior to the event!

His excitement was short-lived, however, as the Junior team suffered the disqualification of two of its riders - Michael Driscoll and Wil Ruprecht - on the first day.

The Aussie junior team was out of the event on day 2, but Snodgrass‰Ûª individual rookie ISDE effort was a sparkling 10th in the E3 category and 29th outright.

‰ÛÏMy first ISDE was awesome." Snodgrass enthused. "It was hard. Your body gets pretty sore by the end of it, but it‰Ûªs fun.

"It was cool to be working as a team, and all the trails up in the hills were pretty awesome. It was amazing to get out to some of the tests in the middle of nowhere and hear loud music and a heap of spectators and people revving chainsaws! It was pretty cool to be over there and doing it for our country.

"To see how everyone back home is so interested in how we‰Ûªre doing, it was awesome. It affects everyone involved with Team Australia. I was shocked to find out that I‰Ûªd won that first test on Day 1. It was ten minutes into the day, but then in the next one I ended up catching someone in the dust and having a crash, then I caught them again and they cut me off. I was pretty angry about it.

"I was riding the 300 TPI bike, and it was awesome! I hadn‰Ûªt ridden one until I got over there, so to like it as much as I did - I think everyone‰Ûªs going to love them. They have really smooth power, just run super clean, and get better fuel economy than the carby bike too.

"I‰Ûªm a little bit disappointed about my overall result, but there were some positives and some negatives along the way, so I‰Ûªm not too mad about it. I‰Ûªm pretty keen for next year‰Ûªs one when we come around to it.‰Û