Finns Finish on Top as EnduroGP Round Two Wraps in Finland 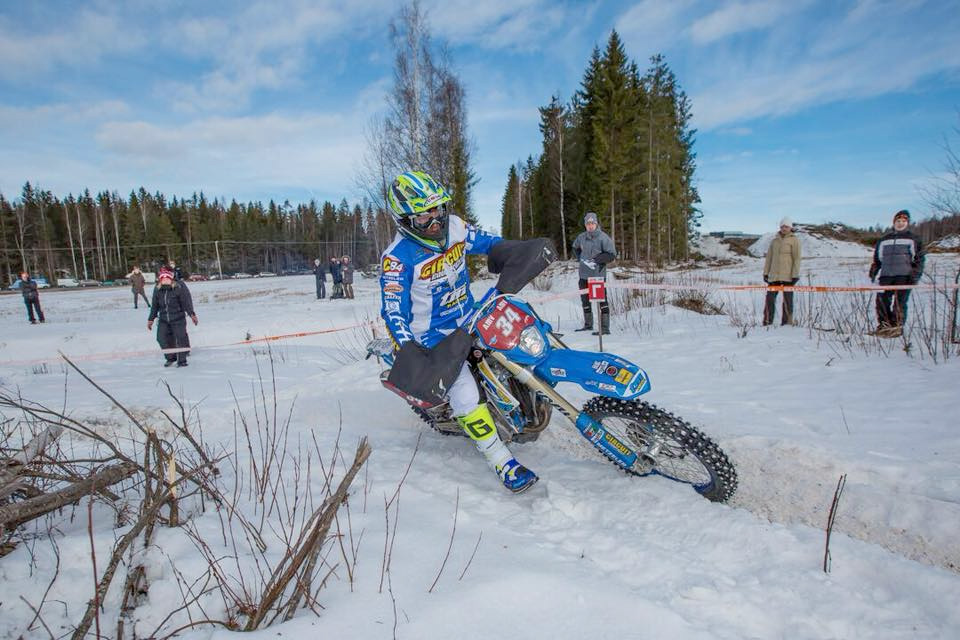 Finnish double World Enduro Champion, Eero Reme was the one to follow on the road to Helsinki as the TM rider wrapped up the win at round two. Photo: endurogp.org
Eero Remes, Eemil Pohjola and Aleksi Jukola have walked away from the second round of the 2018 Maxxis FIM Enduro World Championship with the wins as the opening rounds concluded at a snowy and cold PÌ_ijÌ_nne in Finland.

Round two concluded on a high in the afternoon in the capital city of Helsinki after a shorter second day of racing (7 hours and 20 minutes!). Sunday was not only less taxing in terms of tests, but also in terms of temperature! Indeed, the temperatures finally began to rise into the 'plus range' as Helsinki approached, and the snow was less abundant over the twelve special stages of the second day of the Grand Prix of Finland.

The legendary PÌ_ijÌ_nne nevertheless remains a race for the specialists and in this game the local riders still appear to be unbeatable, despite the enormous amount of progress shown by the regulars of the championship, who really managed to worry the fast Finns.

Finnish double World Enduro Champion, Eero Remes was the one to follow on the road to Helsinki, along with his compatriot Eemil Pohjola, who tried to get his revenge after a mechanical failure on Day 1. But no-one could get near the speed and precision of the diminutive Finn - Remes brilliantly won the EnduroGP (scratch) category, while Aleksi Jukola took third place and inscribes his name in the list of successful PÌ_ijÌ_nne 2018 riders.

Eero Remes was unstoppable not only in EnduroGP but also in E2. For his debut in this medium-sized capacity class, the protÌ©gÌ© of Luca Cherubini, was more than comfortable on this snowy terrain and took the advantage over his most serious rivals. But he had to keep an eye on the very quick and determined Alex Salvini who again upped his game on the final day to take a solid second place.

"I am very satisfied with this Grand Prix," Remes said. "It's a very special race and my goal was to take advantage of my knowledge and experience and get to Spain with a good lead... Mission accomplished! Leader of E2 and second in EnduroGP, I had hoped for this and it augurs well for the future!‰Û 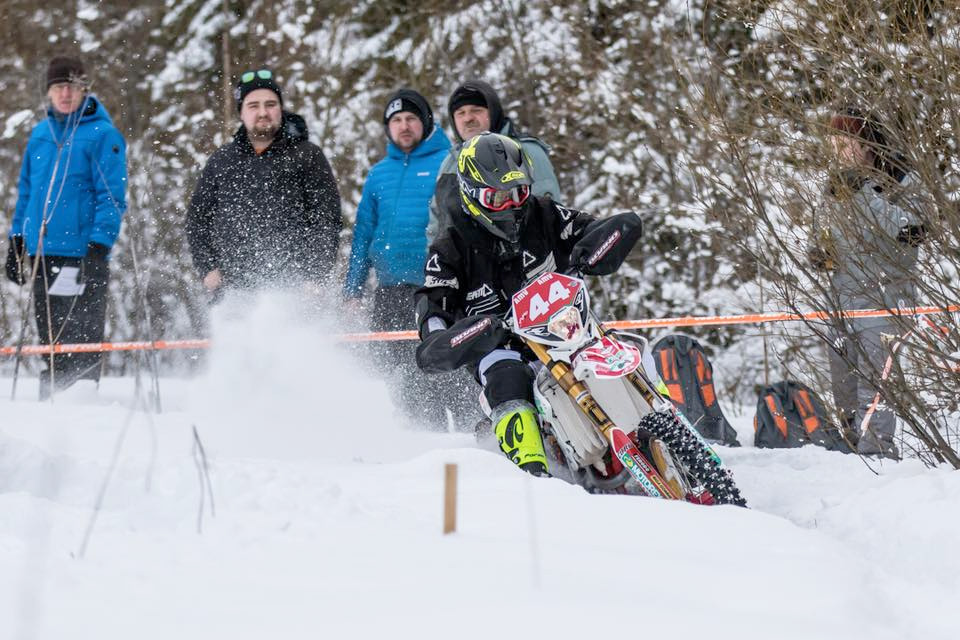 Eemil Pohjola tried to get his revenge after a mechanical failure on Day 1 but couldn't get near the speed and precision of his compatriot Eero Remes. Photo: endurogp.org
Salvini is sure to be one of the favorites for the 2018 title and his return to Team Jolly Zanardo looks to have been very beneficial.

Australian Matthew Phillips was desperate to improve after a dismal Day 1... and his smile of relief today contrasted with his unhappy face the day before.

The Tasmanian admitted to having suffered a lot in the conditions but The Sherco factory rider snatched his first podium of the year after finding the determination to push on and put his troubles behind him.

"I had one of the hardest days of my career yesterday ... I got really cold in the morning and it drained all my energy," Phillips said. "Today, I am a lot happyier even if I didn't have the best settings for this race but as and when, we found terrain where I felt more comfortable. I'm already looking forward to Spain!‰Û 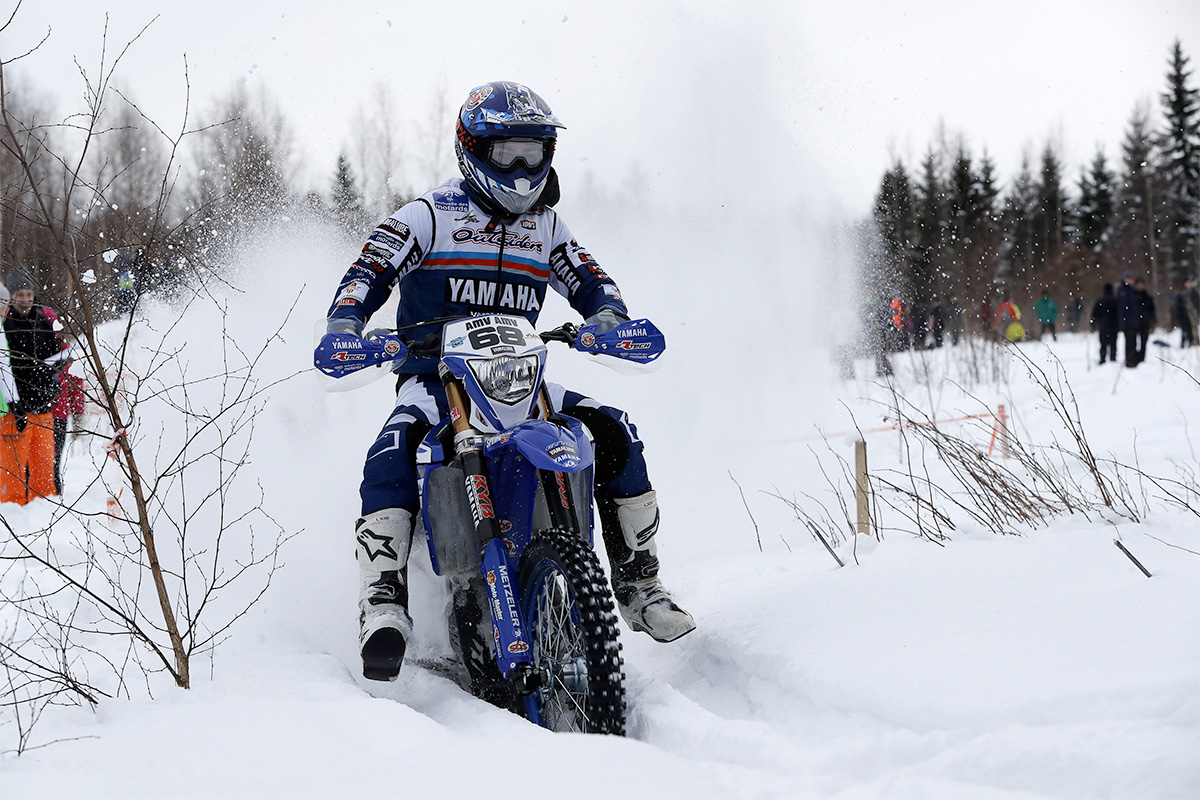 After winning the Enduro 1 class on Day 1 Jamie McCanney opted for a risk-free ride on the second day of racing in Finland. Photo: Yamaha Racing
Suffering over both days, LoÌøc Larrieu tried hard on the run to Helsinki and limited the damage by finishing 4th in front of a very solid Thomas Oldarati and a consistent Deny Philippaerts - who was again in the spotlight with an excellent 6th place, in front of a brave Christophe Charlier.

It was full gas in E1 where Jamie McCanney couldn't replicate his Day 1 victory, the Manxman finishing 5th. He nevertheless takes charge of the small capacity class with his Yamaha WR250, holding a small margin over an amazingly strong Brad Freeman. The Brit impressed, not only with his speed but with his good humour as he took on the challenge of the Senior class.

"I gave a lot yesterday and suddenly, I felt more tired today... Coupled with settings which weren't necessarily right for this race, I had difficulties," McCanney said.

Third today, the 2017 Junior World Champion was unable to hold back the two Finns; Eemil Pohjola and Henry Olenius, who were on fire in the snowy conditions. A great consolation for these two riders after their disappointments on Saturday and a great victory for the Gas Gas rider Eemil Pohjola, who we will happily find for the entirety of the season in the factory Gas Gas team managed by Giovanni Sala. 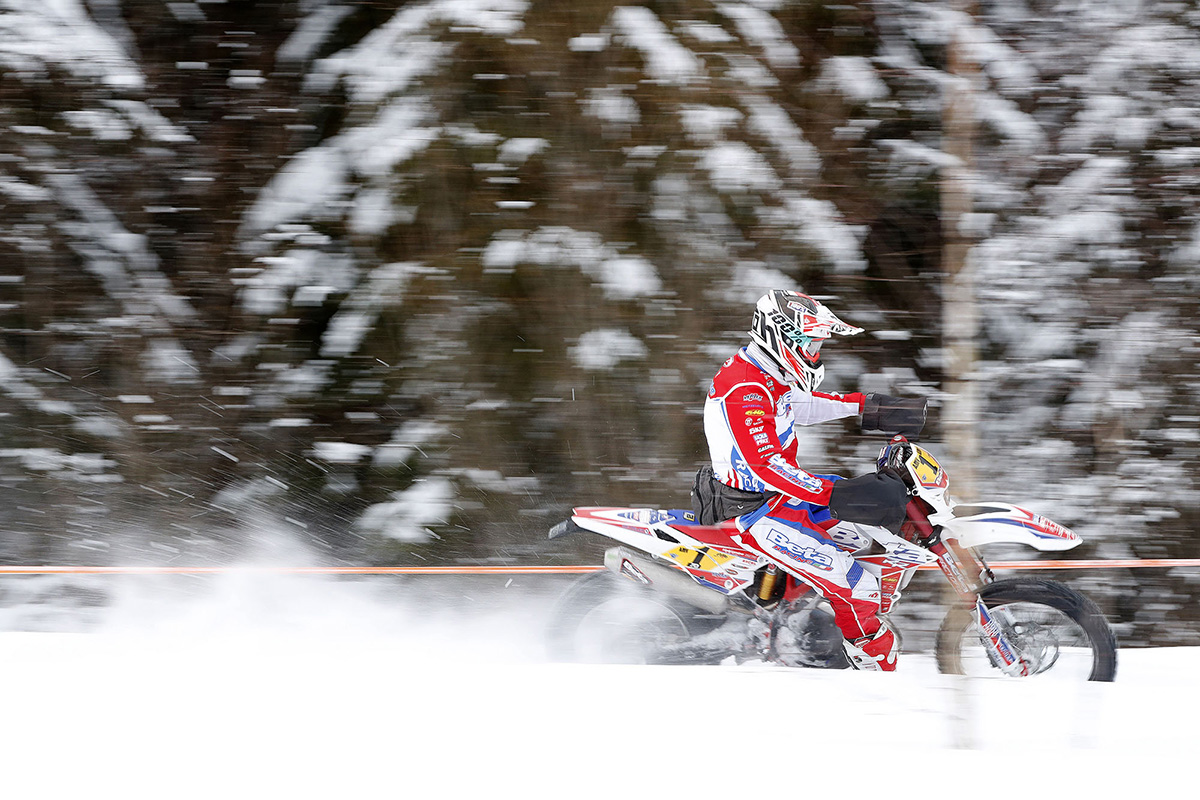 Brit Steve Holcombe proved that he is still the man to beat whether in Enduro3 or Enduro GP. Photo: Future7Media
Although less impressive than the first day, Aleksi Jukola shone again in front of his home crowd and won the E3 class ahead of Tony Eriksson (SF - KTM). But Steve Holecombe still appeared to be very comfortable in these race conditions, taking 6th in EnduroGP, and earning his first podium of the year in E3.

"I came here after a lot of hard work and preparation‰Û_so I'm quite satisfied with my result!" Holecombe declared. "I'm looking forward to the Spanish Grand Prix and being back on special tests that are more suited to me‰Û_‰Û