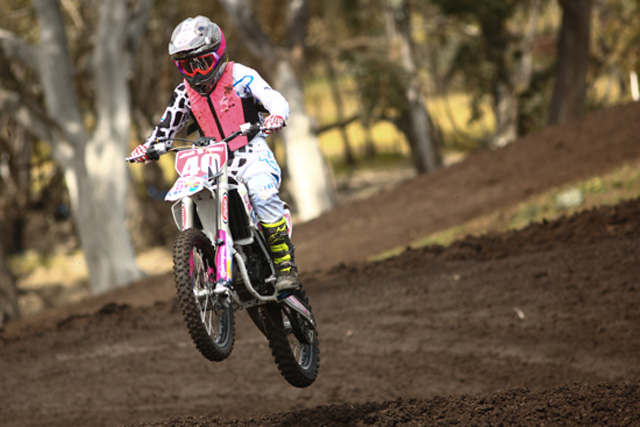 The penultimate day of Horsham‰Ûªs KTM Australian Junior Motocross Championship (AJMX) saw finals racing in full-force, with 13 titles set to come down to the wire during tomorrow‰Ûªs final day of competition.

The Victorian venue experienced significant rainfall overnight, providing slippery and muddy conditions in the early stages of proceedings, however with a relatively clear day, the circuit ended up in it‰Ûªs best form all week.

Junior Lites 15 Years - Final 1:
Race one of the Junior Lites 15 Years category saw dramatic events unfold in turn one as Mason Semmens (VIC) - the title favourite after dominating his heats - was involved in a multi-rider incident. With his bike severely damaged, he was forced to retire, crushing his championship hopes. Queensland‰Ûªs Jack Kukas stepped up to the plate to take a strong victory over Rhys Budd (NSW) and Bailey Malkiewicz (QLD). Western Australia‰Ûªs Mat Fabry passed the chequers in fourth ahead of Joshua Zorbas from Queensland.

Junior Lites 13-U15 Years - Final 3: The third final of the younger group of Junior Lites riders was dominated by Dante Hyam of New South Wales after he blitzed the field by an exceptional 14 seconds. Estonia‰Ûªs Meico Vettik maintained a consistent second for the length of the moto, followed by Liam Andrews (VIC), who was further five seconds back. Noah Ferguson (QLD) pushed his way into fourth ahead of Western Australia‰Ûªs Regan Duffy.

Female Junior Lites 13-U16 Years - Final 3 and 4:
Final number three of the Female Junior Lites category belonged to Western Australia‰Ûªs Tahlia O‰ÛªHare, but she didn‰Ûªt have it all her own way in the early stages after coming under attack from Tanesha Harnett (NSW). Harnett was able to take the lead on lap two, but dropped to second following that before a mistake saw her relegated down the field. New Zealander‰Ûªs Roma Edwards and Rachael Archer were second and third, Harnett salvaged fourth followed by Madi Healey (VIC).

Moto four was once again dominated by O‰ÛªHare, this time storming to a 21-second victory over Harnett. Second through to fourth were only split between five seconds, with Archer and Tahlia Drew (QLD) fulfilling those positions followed by Edwards a further two seconds behind.

125cc 15 Years - Final 3:
Despite coming off a poor start, Mason Semmens (VIC) charged through to his third finals victory in the older age group 125cc division, putting on yet another commanding display. Queensland‰Ûªs Bailey Malkiewicz held the lead in the early stages, but Seemens proved to be good on home soil. Tyler Darby of New South Wales secured third, as fourth and fifth was awarded to Jack Kukas (QLD) and Mat Fabry (WA).

125cc 13-U15 Years - Final 1 and 2:
The opening final of the 125cc 13-U15 Years class looked to be sealed up by Estonia‰Ûªs Meico Vettik, who led the from the get-go all the way until the final lap, but a costly mistake in the whoop section cost him the win. Western Australian Regan Duffy capitalised to claim the win, as Vettik recovered for second followed by Tye Jones (QLD). Victoria‰Ûªs Liam Andrew pulled through for fourth ahead of Queensland‰Ûªs Noah Ferguson.

In moto two, Vettik and Duffy put on a show for the Horsham fans, duelling right to very last corner where Duffy dived for the lead, ultimately resulting in a heavy crash. Vettik won, as Duffy slowly remounted for seventh. Early leader Dante Hyam (NSW) bounced back from an error for second, as Andrews, Corey McMahon (NSW) and Corben Weinert (WA) rounded out the top five.

Mini Lites BW 14-U16 Years - Final 3 and 4:
Queensland‰Ûªs Noah Ferguson displayed incredible form in the third final of the Mini Lites BW 14-U16 Years category, clearing the field with a healthy 13-second advantage. Fellow Queenslander Jai Walker lodged a second place result while a hard-fought battle unfolded behind him between Kai Newbold (SA) and Zack Wright (VIC), with less than a second separating them at the line. Tyler Darby of New South Wales closed out the top five.

In race four, Walker topped the 10-minute plus one lap moto seven seconds ahead of Ferguson, as Newbold settled into a comfortable third. Victorian Riley Fucsko charged through to fourth, while Jarrod Whitney of New South Wales was a new addition to the top five.

Mini Lites BW 12-U14 Years - Final 1 and 2:
South Australia‰Ûªs Alex Larwood proved his heat race victories were no fluke in the Mini Lites BW 12-U14 Years division, taking a narrow win over his competitors as the top three finished withinn a small margin in final number one. New South Welshman Blake Fox positioned himself in second, while Victoria‰Ûªs Matthew O‰ÛªKeefe concluded the top three. Jake Kowal (QLD) and Kipps Adams (VIC) crossed the flag in positions four and five.

Larwood added another victory in race two, rocketing out of the gates to extend a comfortable five-second gap at the conclusion of the outing. New Zealand‰Ûªs Brodie Connolly jumped into second ahead of Brad West in third, while Fox bounced back from crash to capture fourth over Adams.

Mini Lites SW 9-U12 Years - Final 1 and 2:
In the opening final of the small wheel Mini Lites class, Tasmania‰Ûªs Jett Burgess-Stevens carried his form from the heats, charging his way to a commanding 17-second victory. New South Welshman Ryder Kingsford slotted into second, as third through to fifth was completed by Jack Mather (QLD), Max Miller (NSW) and Tyler Collins (NSW).

Burgess-Stevens and Kingsford traded positions in the second outing, with Kingsford taking the win by a four-second advantage this time around. Mather lodged another consistent third place result, while Collins advanced to fourth ahead of Thailand‰Ûªs Krittapat Keankum.

65cc 11-U12 Years - Final 3:
It was a tight battle amongst the top three in the 65cc 11-U12 Years category, but it was Connor Towill from New South Wales who topped the third moto. Queensland‰Ûªs Kobe Drew and Jasper Moon (NSW) passed the chequers less than half a second apart, as Seth Burchell (QLD) and Tyler Wiremu (NZ) rounded out the top five.

65cc 7-U9 Years - Final 3 and 4:
In the younger age group 65cc division, New South Welshman Jack Deveson kept West Aussie Seth Shackleton at bay for the duration of race three, racing home to a four-second win. As Shackleton was credited second, it was Ryder Wilson (NSW) in third, followed by Luke Constantine (QLD) and Max Stevenson (QLD) in fourth and fifth respectively.

50cc Division 2 7-U9 Years - Final 3 and 4:
Queensland‰Ûªs Heath Fisher soared to victory in race three of the 50cc Division 2 class, navigating the challenging conditions with ease to lodge a four-second win. Seth Shackleton of Western Australia settled for the runner-up spot ahead of Slade Oberhardt (QLD) in third, while Queensland duo Max Stevenson and Jackson Fuller completed the first five.

Shackleton was able to overcome Fisher in moto four, which will now see the entry-class title come down to the wire in tomorrow‰Ûªs final race. Oberhardt added another podium result to his name, as Fuller was able to top Stevenson in the penultimate outing.