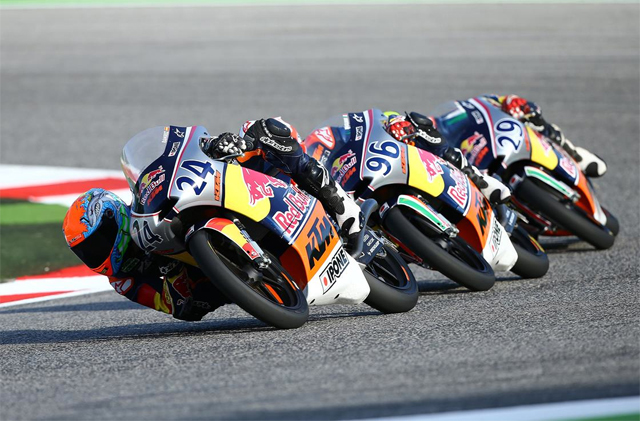 The Aragon round of the MotoGP world championship will play host to the final two races of the 2013 Red Bull Rookies championship with Karel Hanika leading the way.

Hanika is on his way to the 2014 Moto3 World Championship as a member of the Red Bull KTM Ajo Motorsport team. It is a fine reward for winning this year's Red Bull MotoGP Rookies Cup and he has an incredible legacy to follow.

The team won the 2012 World Championship with Sandro Cortese and are leading the title chase this year with ex Rookie Luis Salom.

This weekend in Aragon though Hanika still has the final two races of the 2013 Rookies Cup to concentrate on and the 17-year-old Czech has unfinished business.

He was forced out of Misano's race with an engine problem and spectated as the results produced his Cup winning points position, he certainly sees that as no way to end the season. He continued his crushing form with two German Championship wins in Hockenheim last weekend.

Already with six Rookies wins to his name this year he would love to make it eight and there is no chance whatsoever that this finale will be anything less than spectacular. That is the way of Rookies Cup and while Hanika cannot be caught, second placed could go to any of six young men.

Jorge MartÌ_n, the 15-year-old Spaniard, has a justifiable claim to it, he already has two wins to his name, the only one other than the Czech to get more than one and he pushed Hanika hardest for the title. Some bad luck and a below par weekend in Misano has meant that Manuel Pagliani is now only seven points behind. The 17-year-old Italian has been smooth and quick all season and victory in Misano accelerated his chase for second.

With 50 points on offer from these two races there is plenty more that can change. Marcos Ramirez is fourth in the points chase and has 24 to make up on MartÌ_n. The 15-year-old Spaniard leads his own national championship, the CEV, and has been third in the last three Rookies races. He is desperately looking for his first Cup win at the end of his second season.

In the same position is Stefano Manzi, the 14-year-old Italian, he has already been second three times this year including being robbed on the line in Misano by Pagliani. He has 27 points to make up on MartÌ_n and that second place. Another two adrift is Enea Bastianini, the 15-year-old Italian who won Race 2 in Jerez and was fourth in Misano.

With very outside chances of that second place are 17-year-old Dutchman Scott Deroue, currently seventh in the table with that Silverstone Race 2 win and Diego Perez whose best result so far in his second season is second in Race 1 at Silverstone.

Statistics must be tallied at the end of the season of course but they are not what the Rookies Cup is about. It is the closest action in Grand Prix racing and that is what spectators and viewers will remember as much as who takes home the trophies.

That race action starts at 16.30 CET on September 28th with the year's finale at 15.30 on Sunday. The live show can be seen on www.redbull.tv with the build-up starting 10 minutes earlier.