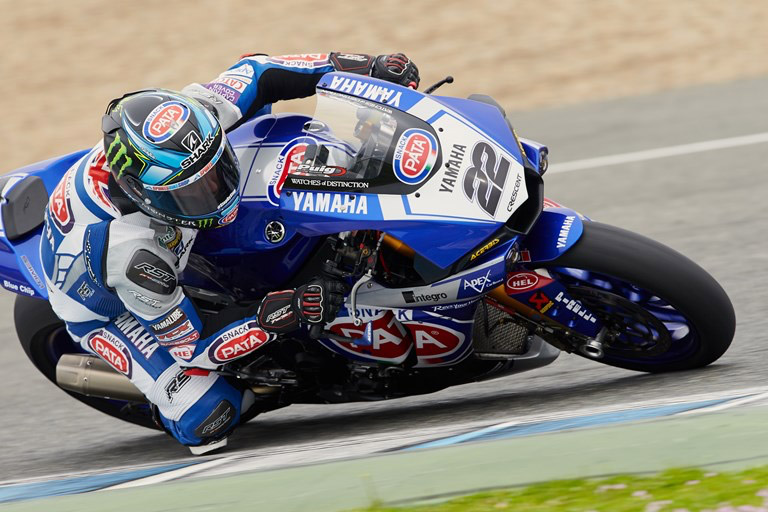 Pata Yamaha Official WorldSBK Team concluded a successful day of testing despite the frequent interruptions of rainfall at the Circuit de Nevers Magny-Cours as Alex Lowes and Sylvain Guintoli returned to their YZF-R1s.

Jumping back aboard his YZF-R1 just one day after his MotoGP debut with the Monster Yamaha Tech3 Team at Silverstone, Lowes immediately got up to speed on his Superbike, circulating for 46 laps as he evaluated electronics and chassis progression amid set-up preparation for the coming races.

Humid conditions brought the rain as the afternoon session began, delaying proceedings, but the British rider remains confident that the correct steps have been taken in readiness for the Championship's return at Laustizring, in Germany, in a fortnight's time and the French round which follows as October begins.

"It's been nice to get back on the YZF-R1 and back with the team today at Magny-Cours." Lowes said. "It's been a shame that we haven't managed to do as much work as we had hoped with the weather conditions, so we haven't done many laps but I felt good. I think we've made some good steps over the summer break so I'm looking forward to the next few WorldSBK races."

Guintoli looked confident as he navigated his native track, completing 24 laps as he continued the work started in Germany last month. Enjoying the return to a track he favours, the Frenchman allowed the familiar layout to ease his progress as he adjusted to the much-developed YZF-R1 before the rain again stopped play in the mid-afternoon.

"It was good to be able to do a few laps here today, for me it was the next step to be able to get back up to speed." Guintoli commented. "We actually got up to speed quite quickly and found a good feeling straight away on the Magny-Cours track.

"I really like this circuit and have been looking forward to coming back here. Getting back on the race bike at Lausitzring was a little different as I had no reference but here I know the track so well, I like riding it, and I know what kind of lap-times I can do here, so it was good to be back up to speed quickly and it just felt like everything is in the right place.

"It's a shame for the conditions, that we couldn't make the most of it today but what we have managed was positive."

The WorldSBK riders were joined on track for the one day test by two of Yamaha's STK1000 pilots, as both Mantovani and Marino traversed the Nevers Circuit. Recently returning from injury, Marino was pleased with the progress made in his recovery, effecting 35 laps on a standard YZF-R1 as he regained his rhythm ahead of his hopeful return to competition later this month.

With two local riders present and the forthcoming French round of the WorldSBK Championship just around the corner, the three Pata Yamaha representatives took the opportunity to join the circuit for a live press conference during the lunchbreak, promoting the race event and answering questions on the day's activities for the attending media.

The Pata Yamaha Official WorldSBK Team will now return to base for final preparations ahead of Round 10 in just under two weeks' time, while Alex Lowes will again return to the MotoGP paddock and the Tech3 Team at the Misano World Circuit Marco Simoncelli this coming weekend for his second race aboard the YZR-M1.