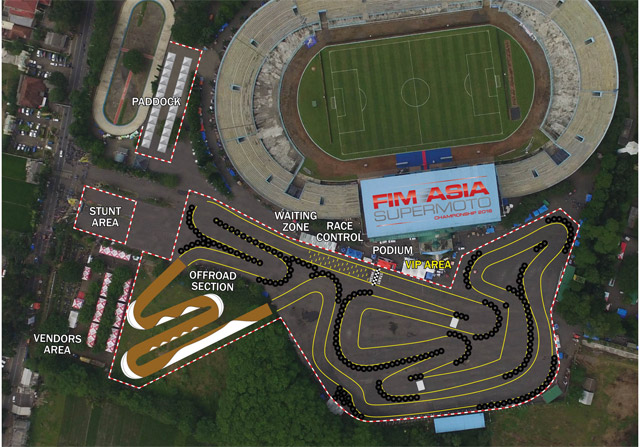 The drastic transition from the picturesque, breezy and cooling land down under to a stadium that has hosted thousands and thousands of cheering football fans, will crown another champion this coming 8 and 9 October 2016.

The FIM Asia Supermoto Championship 2016 will transform the vicinity of the football arena into a battlefield for 23 international supermoto riders from 14 countries striving for championship points and a victory in Indonesia.

All these anticipation building up to the race can never be possible without the organiser and sponsors pouring their hearts and contribution to the race. The approximately 1.2 kilometers track in Malang will be a competition that will lurch through the riders‰Ûª emotions with its whopping one-kilometer tarmac and an approximately 250 metres off-road track.

The menacing track is set to put riders to the test on their balancing skills, facing seven tight hairpin turns, followed by jumps on the off-road track. Losing sight on concentration can lead to an ultimate defeat.

Supermoto is an ever changing and an evolving game, especially when the weather and track condition is uncertain, giving riders with the best overall skills the advantage to secure the top spot. During an interview with Asian Class leader Team KTM‰Ûªs Muhd Habibullah with 50 points on the leader board, his faith to secure the podium in Malang was hammered by the shorter off-roads.

‰ÛÏI have more confidence when it comes to off-road and Malang will be a huge challenge. I will continue my stringent training regime and ensure that I am well-prepared for the race.‰Û