With a mid-season break set to commence at the conclusion of today‰Ûªs racing, Ferris was determined to reach the halfway point of the season with a close to flawless score card, and thanks to 1,2 results today that‰Ûªs exactly what he did.

In traditional South Australian style, Round 5 kicked off in chilly conditions this morning, and when racing commenced the Thor MX1 class was forced to contend with on and off rain across both of their 30 minute motos.

Unfortunately for Tonkov, despite qualifying fifth fastest, he was relegated three positions due to jumping on the first lap of the session, handing fifth position and entry to GoPro Superpole to Factory Honda‰Ûªs Luke Clout.

When each of the top five qualifiers had thrown down their GoPro Superpole hot laps, it was Crankt Protein Honda Racing Team‰Ûªs Waters who took his second straight Superpole victory with a 1:43.066 lap time, an incredible two seconds quicker than his earlier qualifying session result. 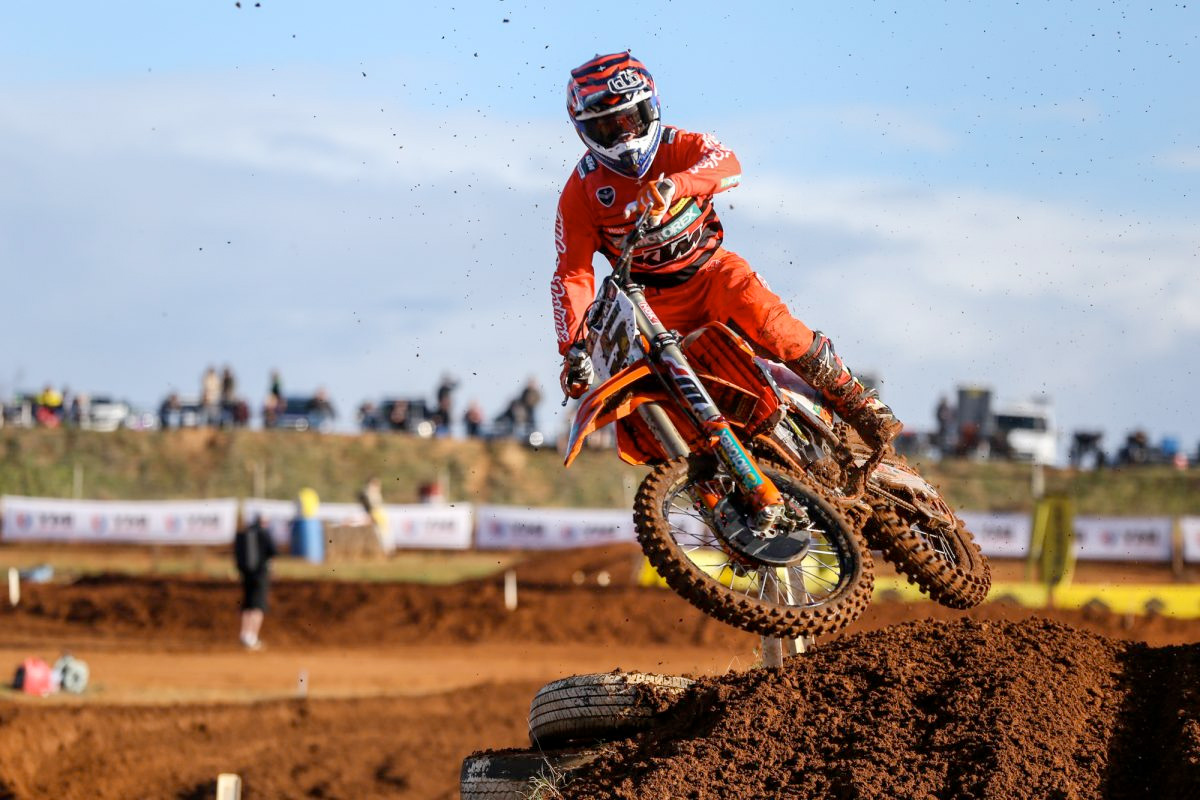 When the premier Thor MX1 class headed to the line for their first moto of the day, all eyes were on the CDR Yamaha machine of Dean Ferris who was attempting to collect his fifth consecutive round victory at Murray Bridge. When the gates dropped, it was a familiar sight with Ferris securing the Raceline hole shot, while Wilson Coolair Motul Factory Suzuki‰Ûªs Peters and and KTM‰Ûªs Gibbs slotted in behind him.

After only a lap, Ferris had a healthy five second lead on the field, showing off his incredible versatility regardless of conditions.

With the top three riders well ahead of the field, the attention shifted to the competitors behind them. After only two laps KTM Motocross Racing Team‰Ûªs Luke Styke in fourth position began to feel the pressure from Metcalfe who was doing an incredible job aboard his privateer SA Plasterboard KTM is fifth. And after only a lap, their battling speed carried them onto the rear wheels of the top three, setting up an all out brawl for second to fifth positions.

Peters, who had started the race in second place was no sooner put down a spot by KTM‰Ûªs Gibbs, and from there the Suzuki rider had his hands full, with Styke, Metcalfe and Waters all beginning to close in on their American competitor.

By the time riders reached lap four, Metcalfe was undoubtedly on a charge, making the pass on Styke and then Peters to move in to the final podium position. From there, Metcalfe closed in on second placed Gibbs and by the time riders headed in to their seventh lap, the Murray Bridge local had made the pass for second on his privateer KTM machine.

In what was a shock to onlookers, only shortly after, Metcalfe‰Ûªs bike began to smoke, and with his tear offs flapping behind him, spectators were left wondering whether the most experienced rider on track would be able to bring it home.

By the time riders reached the 20-minute mark, Ferris had checked out, controlling the race with zero threat to his lead. Metcalfe continued to maintain second position, followed by Gibbs who was starting to feel the pressure from Peters in fourth.

As race one progressed, Waters found his second wind and with eight minutes left on track made the pass on Peters for fourth, while DPH Motorsport‰Ûªs Mosig followed suit. Unfortunately for Peters, Clout and Styke also made moves on the Wilson Coolair Motul Factory Suzuki rider, dashing his hopes of a podium finish.

In the closing stages of moto one for the Thor MX1 class, it had become evident that Ferris was on another level, simply schooling his competitors and gapping the field by an incredible margin. Behind him, Metcalfe continued to circulate in second, while Gibbs was desperately trying to fight off Mosig who had charged his way through the pack up to the KTM rider‰Ûªs rear wheel.

But it was Ferris who was once again unbeatable in race one, crossing the finish line with yet another victory aboard his CDR Yamaha machine and with a 24 second margin. Metcalfe held on to finish in second ahead of Gibbs who fought off Mosig on the final lap to conclude race one in third.

DPH Motorsport‰Ûªs Mosig wrapped up the first race of the day in fourth, followed by Honda duo Waters and Clout in fifth and sixth respectively. Styke, MEGA Bulk Fuels Monster Energy Kawasaki‰Ûªs Tonkov, Peters and Zac Small rounded out the top ten in moto one. 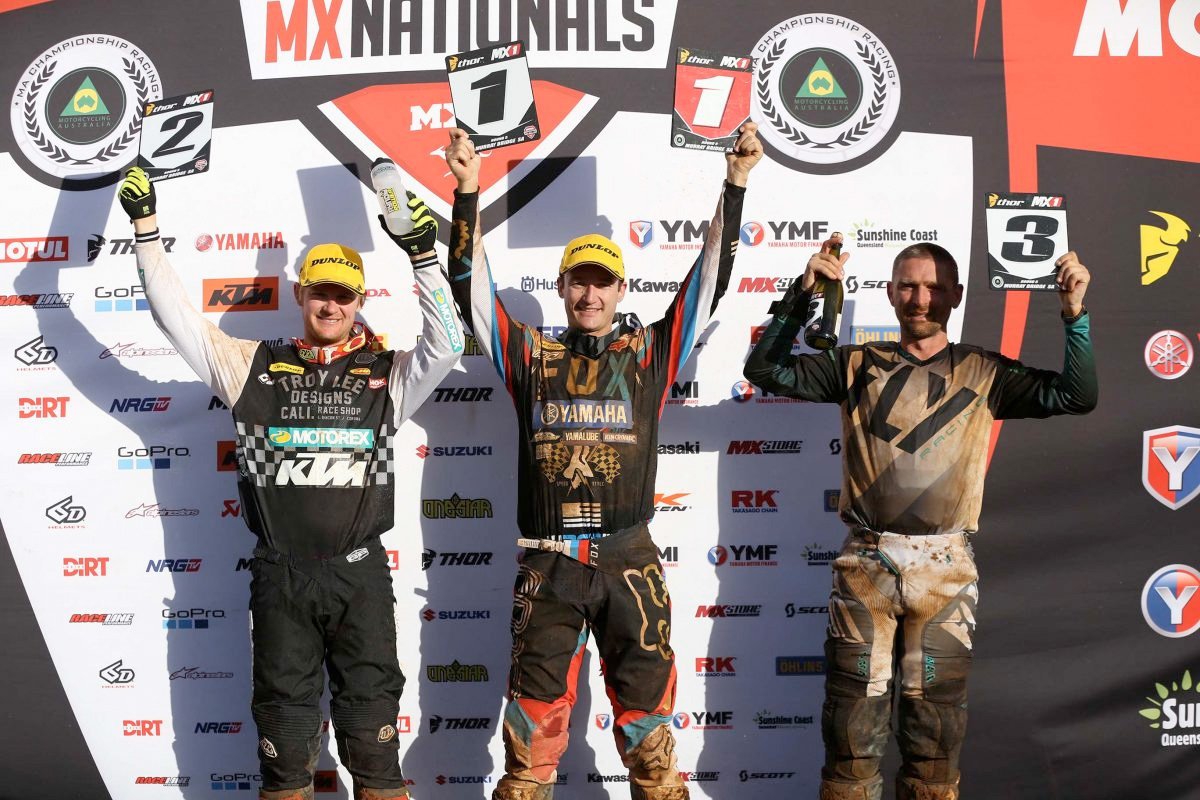 With the threat of rain in the second moto, the Thor MX1 class prepared for all conditions when they took to the line for the final time. And when gates dropped the rain began plummeting down. It was KTM‰Ûªs Gibbs who secured the hole shot and moved in to the race lead, but true to tradition Ferris was right there, as well as local man Metcalfe.

After two laps the rain set in, and Gibbs, Metcalfe, and Ferris broke away from the group setting up an all out battle for the race lead.

Behind the top three, DPH Motrosport‰Ûªs Mosig led the charge in fourth followed by Crankt Protein Honda Racing‰Ûªs Waters, Clout and Wilson Coolair Motul Factory Suzuki‰Ûªs Peters. But the riders who were capturing the crowd‰Ûªs attention were Gibbs, Metcalfe and Ferris who despite the deteriorating track conditions continued to charge harder than ever for the top three positions.

By the 18-minute mark in race two, Gibbs looked comfortable controlling the race, while back in second position Metcalfe continued to apply the pressure on his fellow local rider. Surprisingly for only the first time this season Ferris occupied third ahead of Mosig, Waters and rookie Honda rider Clout.

As the Thor MX1 category reached its closing stages of moto two, Ferris made the move on Metcalfe for second, and before long the CDR Yamaha rider found the rear wheel of Gibbs and began to challenge for the race lead.

As moto two reached its closing stages, the rain fell heavily on the Murray Bridge circuit, but Gibbs was having no trouble with the conditions at all, ticking off lap after lap and edging closer to his second race victory of the year.

When the points were tallied from both motos it was Ferris‰Ûª 1,2 results that saw him take his fifth consecutive overall win at Murray Bridge, second step on the podium was taken by Factory KTM‰Ûªs Gibbs, while SA Plasterboards Metcalfe who was racing as a privateer at Round 5 finished in third.

CDR Yamaha‰Ûªs Ferris now holds an impressive 48 point lead as the series heads in to the mid-season break.

‰ÛÏMoto one was perfect, I got the holeshot and checked out. Moto two was harder, I found it difficult to pass here today, I got roosted a lot and I really had to manage the race,‰Û