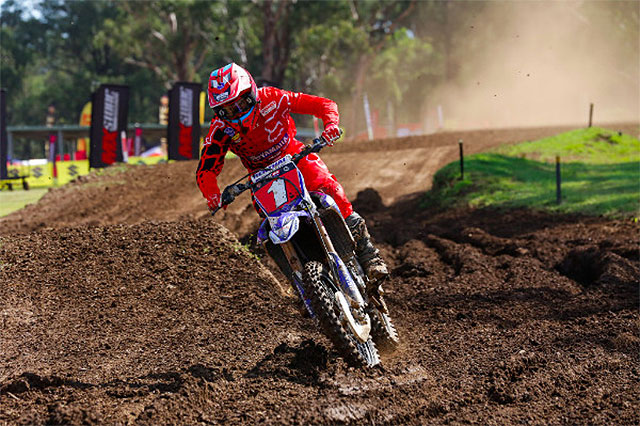 The second round of the 2017 Motul MX Nationals took place at Appin in New South Wales today, and once again CDR Yamaha‰Ûªs Dean Ferris took no prisoners, catapulting to his second Thor MX1 round victory so far this season on the deep rutted and technical circuit.

The Thor MX1 class delivered world class racing from the first gate drop at Appin, with Ferris forced to contend with tough competition and the weather, eventually fighting all the way to the final finish line to leave with another round victory to celebrate.

This morning, it was late in the qualifying session that CDR Yamaha‰Ûªs Ferris set the fastest lap time, a 1:44.696, while despite holding the quickest lap for a good portion of the session, KTM‰Ûªs Kirk Gibbs was pushed down to second with a 1:44.984. Mega Bulk Fuels Monster Energy Kawasaki‰Ûªs Nathan Crawford had his first taste of running with the top guys this morning qualifying in third, while Wilson Coolair Motul Factory Suzuki‰Ûªs Kyle Peters, and SD3 Husqvarna‰Ûªs Brett Metcalfe finished fourth and fifth, and were the final two riders to progress to GoPro Superpole alongside the top three.

But it was Ferris who made it two GoPro Superpole victories in a row at Appin, throwing down a lighting fast 1:42.478 lap time, handing him additional championship points and first gate pick for the round ‰ÛÒ setting himself up for another close to perfect day at the races. 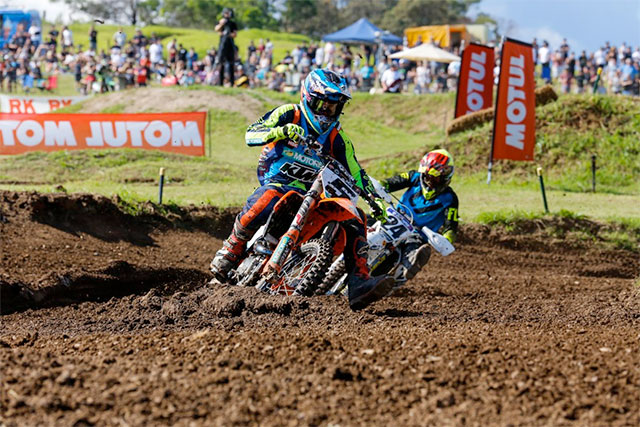 When bikes lined up for moto one, all eyes were on Ferris‰Ûª number 1 machine, but when gates dropped it was Peters who collected the Raceline holeshot, but Ferris was once again right on his rear wheel.

After only two laps, Gibbs joined the battle at the front, with Peters, Ferris and Gibbs only separated by the smallest of margins, ensuring that the crowd was left well and truly on the edge of their seats. Behind the top three was Brett Metcalfe, and DPH Motorsport‰Ûªs Kade Mosig, while MX1 rookie Crawford was back in sixth position.

But it was Gibbs who was a man on a mission in moto one, and after only a few turns had made the pass on Ferris for second where he began to eye off Peters. And by lap five, Gibbs had asserted his authority, flying past Peters and slotting up into the lead position for the first time this season.

Surprisingly, it was round one winner Ferris who continued to come under fire from other riders, and before long Metcalfe had also made the pass on 2016 champ to slot into third. Thankfully it wasn‰Ûªt long before a mistake from Metcalfe and Peters allowed Ferris to move back into second position.

By just over the halfway point in race one, Gibbs had a healthy five second lead on Ferris in second. Peters continued to maintain third ahead of Metcalfe who had made his way past Mosig in fifth. Crankt Protein Honda Racing‰Ûªs Todd Waters appeared to be having a tough ride in sixth position, followed by Crawford, KTM‰Ûªs Luke Styke, Luke Clout (Honda) and Keiron Hall, who all occupied positions inside the top ten.

As moto one reached it‰Ûªs closing stages, Metcalfe showed off his experience on his Husqvarna machine launching up to third place, while Peters and Mosig both slipped down to sixth and seventh places.

But it was Gibbs who simply ran away with it in race one, putting in consistent, clean laps to take his first race win for the year. Despite posing a threat to the lead earlier in the moto, Ferris crossed the line in second, followed by MX1 veteran Metcalfe in third. Kawasaki‰Ûªs Crawford collected his best finish so far this season, a fourth, while Mosig recovered from a handful of mistakes to finish in fifth. Waters, Peters, Styke, Clout and Russian Aleksandr Tonkov all completed the MX1 top ten in race one.

Riders were met with drastically different weather conditions when the second moto got underway this afternoon ‰ÛÒ a huge black cloud covering the circuit and threating the class with rain. When gates dropped it was Ferris who fired off the start and collected the second Raceline holeshot of the day followed by Waters and Styke. Surprisingly Gibbs and Peters who were impressive in race one were back outside the top ten setting up the final moto as a dash to the finish line.

With the rain well and truly beginning to fall after only one lap, riders were forced to adapt to the conditions, but Ferris got better as the weather got worse, and by lap two had stretched out his lead four seconds.

With Ferris and Waters checked out, Metcalfe once again slotted in to third position ahead of Styke and Mosig. Tonkov looked comfortable as the rain set in in sixth, while teammate Crawford held down seventh.

With the track deteriorating by the minute, the lap times dropped by more than two seconds, and by the seven lap mark Ferris was the only rider on track clocking times under two minutes ‰ÛÒ an impressive six seconds a lap faster than any of his competitors.

By the halfway point in the final moto, Gibbs had made his way from outside the top ten into seventh, while Peters who had been close to dead last after lap one had found his way back to tenth.

As race two began to wrap up, Ferris looked at one with his CDR Yamaha machine, adapting like a true professional to the drastically changing surface conditions. Behind him, Waters continued to maintain second position, followed by Gibbs who had incredibly clawed his way up to third.

But in the pouring rain this afternoon it was Ferris who once again proved why he‰Ûªs the reigning MX1 champ, celebrating and taking the final moto win by a remarkable 35 seconds. Waters finished the final MX1 moto in second position, while Styke was handed third thanks to a late mistake from teammate Gibbs.

Mosig wrapped up moto two in fourth, followed by Metcalfe and Gibbs who finished in fifth and sixth places respectively. Tonkov, Crawford, Clout and Peters wrapped up the top ten in moto two.

‰ÛÏThe first moto was tough ‰ÛÒ I didn‰Ûªt really find my rhythm and Kirk (Gibbs) was riding really well, so I got a bit lucky with a few riders making mistakes but we got solid points in that moto,‰Û