Ferris leaves Appin with a win and the red plate 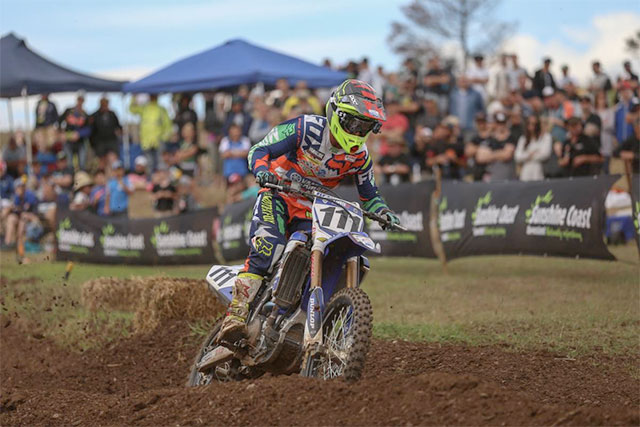 CDR Yamaha‰Ûªs Dean Ferris showed that consistency is the key to success, taking the Thor MX1 overall win at Round 2 of the Motul MX Nationals at Appin in New South Wales today.

There was excitement in the air from the minute the Thor MX1 engines roared back to life this morning, and with National Pump Monster Energy Kawasaki Racing Team‰Ûªs Matt Moss entering the round with the championship lead, the battles were on.

When qualifying got underway this morning, much like at round one, no one was able to separate the talent packed class, and after only two laps of qualifying were in the books, Wilson Coolair Motul Factory Suzuki‰Ûªs Todd Waters shot to the top of the times (1:41.461), while KTM Motocross Racing Team‰Ûªs Kirk Gibbs held down second position with a time of 1:42.286. Thor MX1 red plate holder Moss also finished within the top three, with a 1:42.671 qualifying time.

At the conclusion of qualifying, the top five riders Waters, Gibbs, Moss, CDR Yamaha‰Ûªs Dean Ferris and DPH Motorsport‰Ûªs Lawson Bopping, did exactly what was required to progress through to GoPro Superpole. And when each rider had put down their fastest laps, it was Suzuki mounted Waters who took the GoPro Superpole victory with a lightening fast lap time of 1:40.295.

When gates dropped on moto one for the Thor MX1 class, thousands of spectators had flooded in to the venue, and it was CDR Yamaha‰Ûªs Ferris who flew through the first turn, to snatch up the holeshot ahead of Waters, Kawasaki pair Moss and Mosig, Gibbs, as well as Crankt Protein Honda Racing‰Ûªs Jay Wilson.

By lap two, the top three riders were all within three quarters of a second of each other -Ferris, Waters and Moss treating spectators to an epic battle for the race lead. And by halfway through lap three, Waters took control of moto one and moved in to the race lead.

With Waters out in front and with a 3.2 second gap on the field, the focus then shifted to Gibbs, Ferris, Moss, and Mosig who were all going bar to bar for the remaining podium positions.

Despite Water‰Ûªs having a healthy lead, KTM‰Ûªs Gibbs began to close in on the Suzuki machine - Gibbs rising to the occasion, and proving that the defending champ won‰Ûªt be going down without a fight.

By the half way mark in the moto, Waters managed to hold on to the race lead, ahead of Gibbs, Ferris, Moss and Mosig, while SD3 Husqvarna‰Ûªs Brett Metcalfe fought to move in to sixth position, followed by CDR Yamaha‰Ûªs Dan Reardon in seventh, and Wilson in eighth.

By lap nine, Gibbs and Ferris were within a bike‰Ûªs length of each other, leaving spectators wondering who would be able to edge out the other, and despite Ferris making the pass and moving in to second for a short period of time, Gibbs fought back to reclaim second spot.

However, the race was well and truly far from over. With Gibbs on a charge, the 2015 champ lived up to his ‰Û÷diesel‰Ûª engine name, and snatched the lead away from Suzuki mounted Waters, leaving Ferris and Water‰Ûªs to battle for second behind him.

And battle they did ‰ÛÒ by the time the last lap board was shown, Gibbs appeared to be ready for victory, while Ferris managed to get by Waters relegating him to third, followed by SD3‰Ûªs Metcalfe who was having an incredible ride in fourth position.

But when the chequered flag flew, it was CDR Yamaha‰Ûªs Ferris who put in one last fight to get the job done, making a last minute pass on Gibbs to cross the finish line victorious, while Gibbs held on to finish second, ahead of Wilson‰Ûªs Coolair Motul Factory Suzuki‰Ûªs Waters who wrapped up moto one in third.

When gates dropped for the second time for the Thor MX1 class, Crankt Protein Honda Racing‰Ûªs Dylan Long looked like he was about to snag the holeshot, but it was red plate holder Moss who was through turn one first, shooting in to the early race lead.

With one lap in the books the top ten was flooded with talent, Moss continuing to lead from SD3 Husqvarna rider Metcalfe, while CDR Yamaha‰Ûªs Ferris once again was at the front of the pack in third position.

By lap four, Moss looked super comfortable out in front, while Metcalfe continued to impress in second place, ahead of KTM Motocross Racing Teams Gibbs who had gotten by Ferris to move in to third. Ferris then continued to drop positions, with Water‰Ûªs also managing to get by the CDR rider, and Gibbs to move in to an impressive third place behind Metcalfe.

It was in lap seven though, that spectators were treated to the sight they had been waiting for, with Metcalfe making the move on red plate holder Moss, and taking on the moto two race lead. And with that Metcalfe was gone ‰ÛÒ pulling more than a 3.7 second gap on Moss after only one lap.

By the halfway point in moto two, riders had settled into their respective positions, with Metcalfe leading from Moss, Waters, Gibbs, Ferris, and Reardon.

As moto two reached its final stages, there was little change to the running order, however it was a race to forget for Kawasaki‰Ûªs Moss who crashed with only a few laps to go, handing second position to Waters, while Gibbs and Ferris also made up a position due to Moss‰Ûªs misfortune.

Despite the top four riders bunching up and battling all the way to the finish line, it was a fairy tale ending for Husqvarna mounted Metcalfe, who took his first ever MX Nationals moto victory, ahead of Wilson‰Ûªs Coolair Motul Factory Suzuki‰Ûªs Waters, while Ferris put in a late charge to finish in third place ahead of Gibbs.

When results from both motos were combined, Metcalfe was just two points shy of the round win, CDR Yamaha‰Ûªs Ferris doing all that was required to take the red plate and the round two victory at Appin, ahead of Metcalfe who wrapped up round two in second position, while Wilson‰Ûªs Coolair Motul Factory Suzuki‰Ûªs Waters rounded out the top three.

‰ÛÏI‰Ûªm stoked to get the round win today, the plan was always just to get through the first round, but honestly I was pretty disappointed not to get the win in Horsham to be honest,‰Û