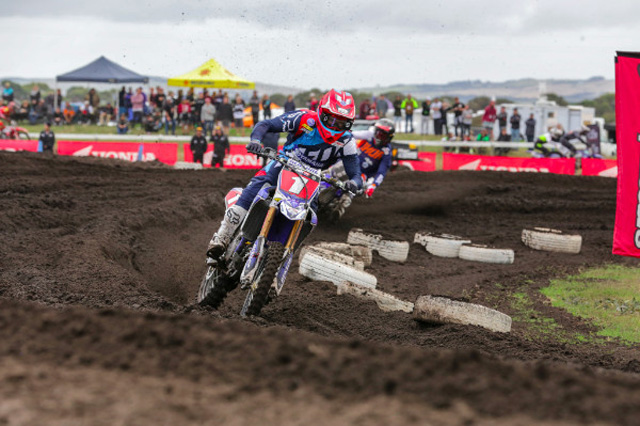 After much anticipation, thousands of spectators watched on as the first spoils for 2017 were collected by 2016 Thor MX1 Champion and CDR Yamaha‰Ûªs Dean Ferris in what was an eventful Round 1 of the 2017 Motul MX Nationals at Wonthaggi today.

With the premier Thor MX1 class fairing some of the most talented competitors that the series has seen in years, Ferris had his work cut out for him aboard his Yamaha YZ450F in both 30 minute plus one lap motos this afternoon.

The depth of talent within the class was realised from the minute bikes hit the track for qualifying this morning ‰ÛÒ the top ten separated by only 2.8 seconds. But it was experienced SD3 Husqvarna rider Brett Metcalfe who capitalised on the smoother track conditions early in the session, recording the fastest qualifying time ‰ÛÒ the only rider to dip into the 1:45s with a 1:45.332.

Less than a second behind him was 2015 MX1 champ Kirk Gibbs (1:46.046), followed by Crankt Protein Honda Racing Team‰Ûªs Todd Waters (1:46.266). CDR Yamaha‰Ûªs Ferris and KTM Motocross Racing Team‰Ûªs Luke Styke recorded the fourth and fifth fastest times, and from there the top five were through to GoPro Superpole.

But when GoPro Superpole was wrapped up it was no longer Metcalfe who was fastest on track. Despite only clocking in the fourth fastest time during qualifying, CDR Yamaha‰Ûªs Ferris bounced back when it counted, collecting the first Superpole victory for 2017 and three championship points with an impressive 1:45.320 lap time, ahead of Styke, Metcalfe, Waters and Gibbs. 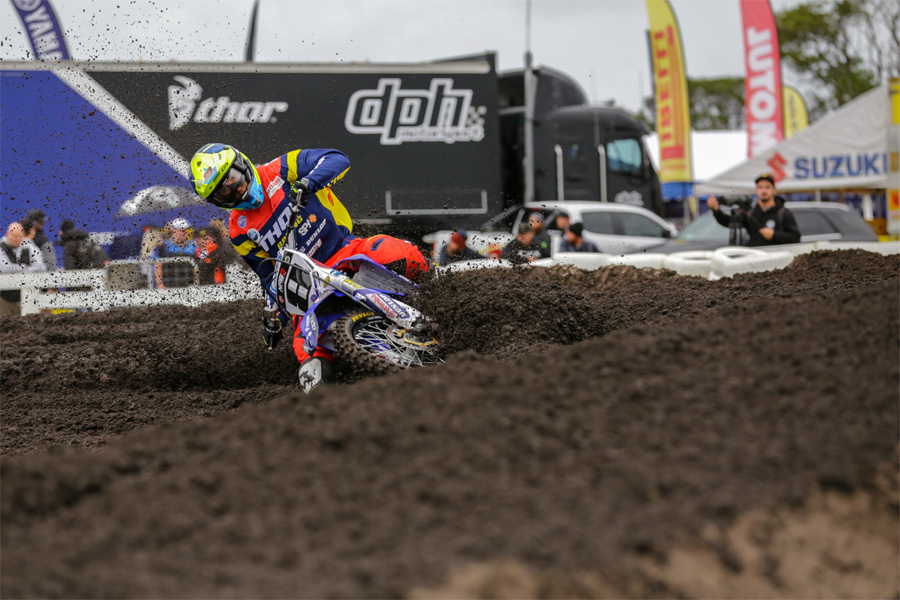 When riders lined up for moto one, thousands of spectators dotted the fence line in anticipation for the first premier class show down of the year, and when gates dropped it was Wilson Coolair Motul Factory Suzuki‰Ûªs Kyle Peters who snatched up the Raceline holeshot, and put healthy distance between himself, Ferris, and DPH Motorsport‰Ûªs Kade Mosig.

After only two laps, Peters continued to hold off last year‰Ûªs Thor MX1 Champ, while Waters managed to get by local DPH Motorsport rider Mosig to move in to third position. And from there, Waters continued to apply the pressure - with Ferris his next target, the Honda CRF450R rider closing in rapidly on the CDR Yamaha machine.

But just as Waters had closed in on Ferris, Ferris closed in on race leader Peters, providing spectators with a three-way battle for the opening MX1 moto top spot.

After seven laps on track, the running order saw Suzuki mounted Peters continuing to maintain control of moto one, while Ferris and Waters were locked in to their own battle for second position behind him. Local Mosig was back in fourth place ahead of Gibbs, while MX1 rookie Luke Clout (Crankt Protein Honda) was having an impressive ride in sixth position.

By the halfway mark in moto one, Ferris started making passing attempts on Peters, but with rain beginning to fall, and the top riders into lapped traffic, the CDR Yamaha rider wasn‰Ûªt able to make a move stick.

In what was a surprise to onlookers, Waters made a mistake whilst in third place in the later stages of the moto, which saw him drop back to fourth.

With only seven minutes left on the clock Peters and Ferris tightened up once again, and although both riders were making mistakes and changing lines left, right and centre on the technical circuit, the pair remained in first and second positions ahead of Mosig in third.

But with one and a half laps remaining, Ferris made a pass on Peters stick, and unfortunately for Peters the bad luck didn‰Ûªt stop there, Mosig also managed to get by the Suzuki rider before Peters was forced to head back to the pits with a bike malfunction.

And with Peters out of the equation, Ferris was able to breeze to victory, while Mosig put in one of his best rides in more than 12 months to take second, followed by Waters who inherited third position in the opening moto. Gibbs concluded race one in fourth ahead of SD3 Husqvarna‰Ûªs Metcalfe in fifth. Crankt Protein Honda Racing Team‰Ûªs Clout wrapped up his debut MX1 moto in sixth position, while Styke, MEGA Bulk Fuels Kawasaki‰Ûªs Nathan Crawford, Peters, and CDR Yamaha‰Ûªs Dylan Long completed the top ten. 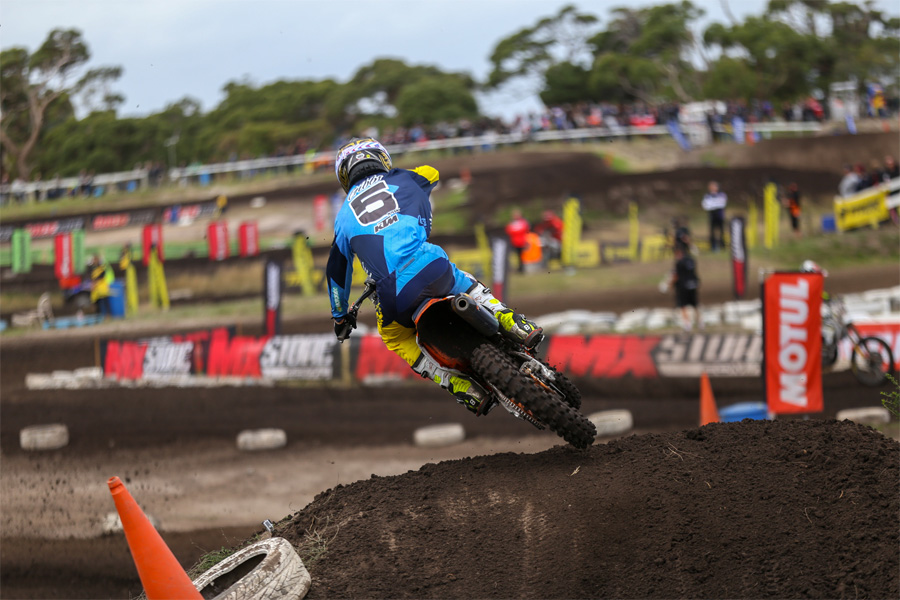 When gates dropped on race two this afternoon, Crankt Protein Honda Racing Team‰Ûªs Clout took the second hole shot for the day, however his teammate Waters was not so lucky, going down in the first turn, and on a mission to make up positions.

But in true Ferris fashion, it took less than a lap for the CDR Yamaha rider to take control of race two, while Mosig only a lap later also made the pass around Clout to slot up into second position.

Behind Ferris and Mosig, it wasn‰Ûªt long before Clout had his hands full with SD3 Husqvarna‰Ûªs Metcalfe, and after four laps the former AMA Husqvarna rider made the pass on the youngster for third position. Unfortunately for Clout, Gibbs also made his way around the 2017 Honda, relegating Clout to fourth, while Metcalfe went missing from the podium position handing third place to Gibbs.

After nine laps on the gruelling circuit, Ferris continued to maintain a healthy two second gap on Mosig, followed by Gibbs then Clout who was beginning to feel the pressure from Wilson Coolair Motul Factory Suzuki‰Ûªs Peters and KTM‰Ûªs Styke. Long, who is still recovering from a wrist injury circulated in seventh position, while Kawasaki duo Crawford and Aleksandr Tonkov occupied eighth and ninth places.

As moto two reached it‰Ûªs closing stages, no other rider was able to match the form of CDR Yamaha‰Ûªs Ferris, who looked ultra comfortable taking on the chopped up Wonthaggi circuit. And from there it was no surprise to see Ferris collect the race two victory.

Second position was taken by an ‰Û÷in form‰Ûª Mosig, followed by KTM Motocross Racing Team‰Ûªs Gibbs. Fourth place was collected by Gibbs‰Ûª teammate Styke who got by Clout late in the moto, while Clout completed the MX1 top five. Peters, Long, Crawford, Tonkov and Honda‰Ûªs Waters completed the top ten in race two.

But with 1,1 results and a GoPro Superpole victory to boot it was Ferris who collected the first round win of the season at Wonthaggi this afternoon. Second overall was taken by local Mosig, while third position on the podium was taken by KTM‰Ûªs Gibbs.

‰ÛÏYou always want to come out of the first round with good points, but we maximised them today and I‰Ûªm really happy with the improvements that CDR Yamaha and myself made in the off-season,‰Û