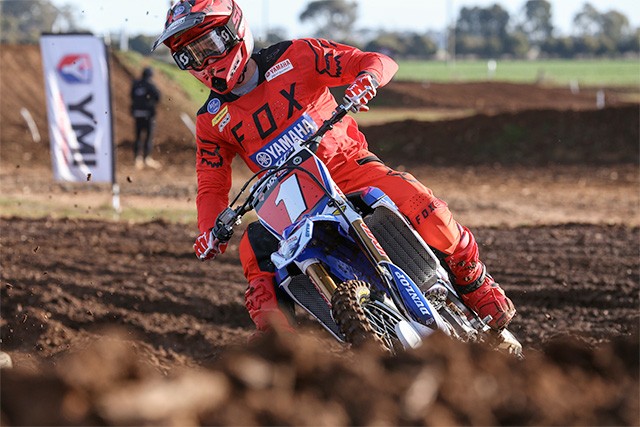 CDR Yamaha‰Ûªs Dean Ferris‰Ûª stunning win streak at the Motul MX Nationals has come to an end when he recorded a second-place finish at round seven of the championship at the Shepparton circuit in Victoria, over the weekend.

Ferris has dominated the championship so far, taking a record breaking six round wins in a row as the MX1 championship rolled into Shepparton. He was determined to keep the momentum rolling and was on track for another good day as action got underway on Sunday.

He comfortably qualified for the Superpole event where the top five riders are pitted against one another for an all-out, no-holes barred, one lap dash against the clock. Ferris set the cold and damp Shepparton circuit on fire when he punched out a 1.32 lap time, nearly a full second ahead of his rivals.

Then as race one leapt from the gates, things appeared to be on track as Ferris slotted into the top three early in the race and sat patiently as the race began to unfold. Then on lap six he made an uncharacteristic mistake and went down, losing 40 seconds on the race leaders.

He remounted in 12th place and then stopped to change his goggles before getting back into the race and clawing his way back through the field. He managed to fight his way forward to seventh place at the end of the 30-minute moto but was determined to redeem himself come moto two.

With fire in his eyes, Ferris took control of race two by the end of lap three and never let it go. He took the win in a good rebounding ride and his 7-1 results landed him in second spot for the day but he still maintains and 54-point lead in the championship with three rounds remaining.