Ferris closes in on Thor MX1 Championship With Toowoomba Victory 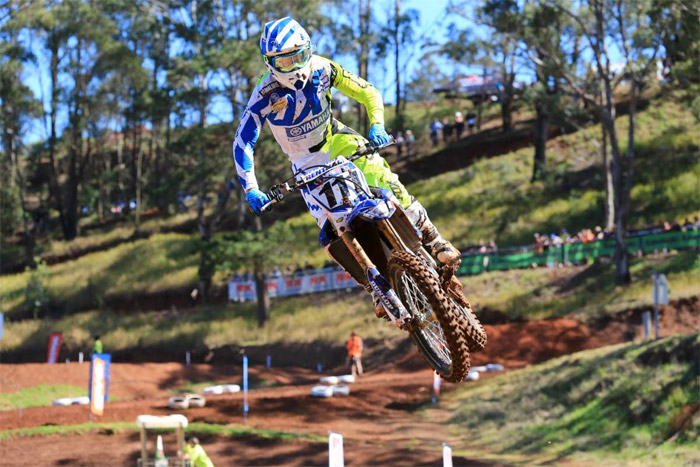 CDR Yamaha‰Ûªs Dean Ferris has kept his Thor MX1 championship hopes alive, after snatching up valuable points across two hard fought races, at Round 9 of the Motul MX Nationals at Toowoomba in Queensland today.

It was an action packed day of racing from the minute the Thor MX1 machines hit the pristine Echo Valley circuit this morning, and with a championship on the line, riders went all out in a bid to bring home the results.

Tensions were high during the opening practice and qualifying session this morning, with GoPro Superpole providing an additional opportunity for riders to add to their points tally. And when the qualifying session wrapped up, it was CDR Yamaha‰Ûªs Dean Ferris, NPE Monster Energy Kawasaki‰Ûªs Kyle Peters, points leader Kirk Gibbs, Wilson Coolair Motul Factory Suzuki‰Ûªs Todd Waters, and Crankt Protein Honda Racing Team‰Ûªs Dylan Long who were the top five riders given the chance to put down their quickest individual laps.

And when Superpole wrapped up, it was American Peters who shook things up, taking the GoPro Superpole victory, and collecting his first championship points of the season, with a flying lap of 1:46.174, followed by Gibbs (1:46.730) and Long (1:47.227).

When the Thor MX1 class headed to the line for their first race of the day, thousands of spectators watched on, ready to watch the fastest riders in the country go to battle at Echo Valley. And when gates dropped, Peters carried his undeniable speed in to race one, taking the first MXStore holeshot and moving in to the lead ahead of Ferris, Gibbs, Mosig and Waters.

After only two laps, Gibbs began his charge towards the front, making the move on Ferris for second position, where he also began to chase down Peters. Just behind Ferris was another battle, with Waters applying the pressure on Mosig for fourth, eventually making the pass as riders headed in to lap three.

With Peters out in front, spectators couldn‰Ûªt peel their eyes away from Gibbs and Ferris in second and third positions ‰ÛÒ with points more valuable than ever at Round 9, the pair were leaving nothing on the track.

But before long, Gibbs broke away, and began to creep closer to Peters‰Ûª Kawasaki, showing spectators that he‰Ûªs got the speed to rival some of the fastest in the world ‰ÛÒ unfortunately, Gibbs‰Ûª charge was cut short ‰ÛÒ a crash forcing the KTM rider to drop back to fourth, allowing Ferris to slot up to second position.

By the halfway mark in moto one, American Peters continued to lead from CDR Yamaha‰Ûªs Ferris in second, Waters had inherited third place thanks to Gibbs‰Ûª crash, while Gibbs was back in fourth position. Kawasaki‰Ûªs Mosig continued to maintain fifth, followed by Long, DPH Motorsport‰Ûªs Jacob Wright and Jesse Dobson (KTM).

As moto one reached its final stages, Gibbs began clawing his way to the front of the pack, the points leader managing to get by Suzuki‰Ûªs Waters to snatch up third position behind Peters, and closest rival Ferris.

But it was the battle for first position that kept spectators on the edge of their seats this morning. With only two laps to go in moto one, Ferris and Peters were going head to head, and by the time the pair were given the last lap board, it was anyone‰Ûªs guess as to who would take the race one victory.

But when the chequered flag flew, it was the American import who had plenty of reason to celebrate, Peters taking his first Thor MX1 race victory, from Ferris and Gibbs who crossed the finish line in second and third.

When race two kicked off for the Thor MX1 class, it was KTM‰Ûªs Gibbs who edged out Honda mounted Long to take the second MXStore holeshot of the day, but after only a few turns CDR Yamaha‰Ûªs Ferris took control of moto two.

With two laps in the books, Ferris looked comfortable out in front, allowing the battle for positions to happen behind him.

As race one progressed, riders had settled in to their respective positions - Ferris leading by only a small margin, from Gibbs and Peters in second and third. Waters who was back in fourth place began to close in on Peters‰Ûª rear wheel, while Crankt Protein Honda racing duo Long and Wilson completed the top six riders in the lead group.

After nine laps on track, despite some brief challenges, there had been no change to the running order, but by lap ten, things began to heat up.

With Peters on a charge, Gibbs came under fire, and as riders headed in to lap 11, Peters had snatched up second position, relegating Gibbs to third.

But it was on the final lap for the Thor MX1 class, that all of the action played out. With a championship on his mind, Gibbs was not going down without a fight, and in the closing stages made the move on Peters for second position, in a last ditch effort for additional points.

And it was in those positions that riders stayed ‰ÛÒ CDR Yamaha‰Ûªs Ferris collecting his first race win for the weekend, ahead of Gibbs in second and Peters in third.

Waters wrapped up the final moto of the day in fourth position, followed by Long, Wilson, Wright, Mosig, Gow and Suzuki‰Ûªs Luke Wilson.

With a win in the final moto, Ferris was awarded with the round victory at Toowoomba, followed by Peters who took second at his debut MX Nationals appearance, while red plate holder Gibbs concluded round nine in third.

Gibbs now holds a six-point lead as the Motul MX Nationals heads to Coolum for the final round next weekend.

‰ÛÏIt‰Ûªs been a good day, 2,1 for the overall gives me solid points. I messed up qualifying a bit which I don‰Ûªt often do, but I made up some points and I‰Ûªm in striking distance of this championship,‰Û