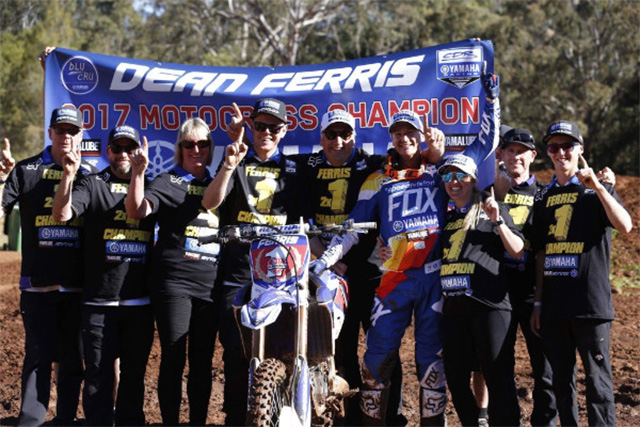 An Australian champion was crowned at Round 9 of the Motul MX Nationals at Toowoomba today, with CDR Yamaha‰Ûªs Dean Ferris racing to 1,1 race results and claiming his second consecutive Thor MX1 title with a round to spare.

With a maximum of three championship points as well as the first gate pick up for grabs, riders had everything to gain in Superpole this morning, but it was Brett Metcalfe who rose to the occasion to claim his first GoPro Superpole win of the season with a 1:49.302 lap time, second went to the man who was fastest in qualifying, Kirk Gibbs, while Ferris finished third, claiming only a single championship point. 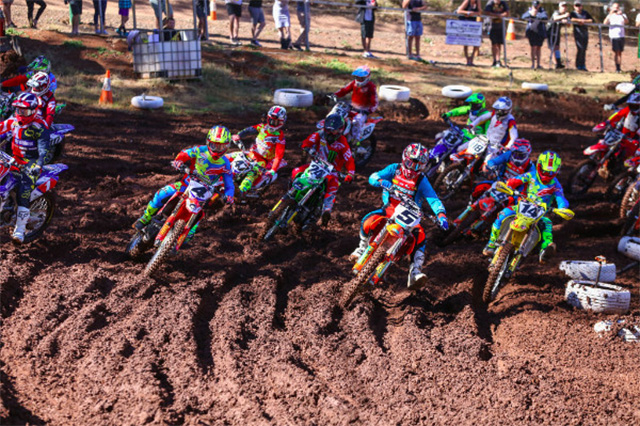 Kirk Gibbs (5) got the holeshot in the opening Thor MX1 race. Credit: MXN Images
When the Thor MX1 riders took to the grid for their first moto of the weekend, thousands of spectators dotted the fence line, ready to watch one of the best races of the season unfold.

When gates dropped, it was Gibbs who stormed down the start straight to claim the Raceline Holeshot, followed by CDR Yamaha‰Ûªs Ferris, and within only a lap the series points leader made the pass on his closest competitor Gibbs and moved into a familiar position, the race lead.

By lap three, the crowd was treated to the battle they had been waiting for, Gibbs began to close in on Ferris and apply the pressure for the lead, meanwhile behind them, Metcalfe too began to reduce the gap between himself and the lead pair.

Unfortunately for Clout, a crash in the early stages of the moto saw him drop back to close to dead last, the Honda rider forced to nurse a damaged machine and come through the field for the next 20 minutes.

After five laps on the Echo Valley circuit, Ferris continued to lead, however Gibbs was not letting the championship leader out of his sights - behind Gibbs, Metcalfe continued to maintain third, followed by Peters, Waters and Nathan Crawford.

By the halfway mark in moto one, Ferris had shaken off the threat that Gibbs previously posed, while Gibbs had his hands full in second, fighting off a hard charging Metcalfe. But unfortunately for Metcalfe, disaster struck the experienced rider after ten laps on track. While sitting in third, Metcalfe crashed out and was forced to return to the pits, registering a DNF.

With Metcalfe out, Peters inherited third, and looked to be in the box seat to claim his first podium race finish of the season.

With six minutes remaining, Ferris had increased his lead on Gibbs to a comfortable 4.5 seconds, the defending champion determined to do everything in his power to wrap up the championship with a round to spare.

When riders received the last lap board, it was clear that Ferris‰Ûª dominance couldn‰Ûªt be matched, and with no change to positions, the red plate holder simply had one more lap to complete in order to collect his 14th race victory.

And claim victory is exactly what the CDR Yamaha rider did, second place went to KTM Motocross Racing Team‰Ûªs Gibbs, followed by Peters who broke through to finish in third in moto one. Fourth position went to Kawasaki rookie Crawford, followed by Crankt Protein Honda Racing‰Ûªs Waters in fifth. DPH Motorsport‰Ûªs Kade Mosig concluded race one is sixth, followed by Dylan Long, Luke Styke, Clout who charged through the field to ninth, while Lachlan Davis completed the top ten. 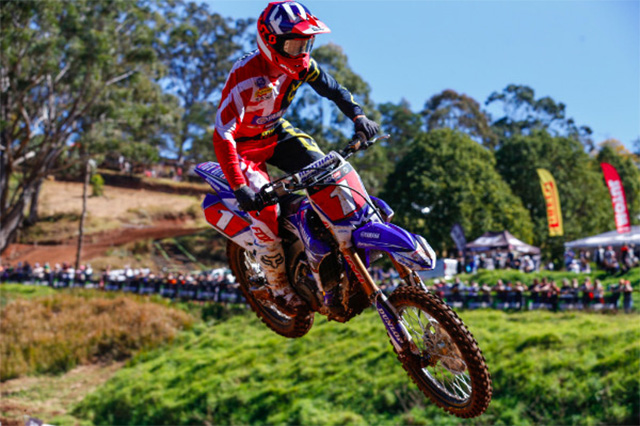 Dean Ferris went 1-1 to wrap up the championship with a round to spare. Credit: MXN Images
With Ferris faced with the opportunity to clinch the Thor MX1 title in moto two the crowd remained trackside to witness what could be the biggest moment of the season.

When gates dropped, it was Gibbs who once again secured the Raceline holeshot, but with back to back championships on his mind, it only took four turns for Ferris to move into the race lead.

After two laps, Ferris‰Ûª lead on Gibbs increased to 3.5 seconds, while behind the top two Peters and Mosig occupied third and fourth positions. But with 30 minute plus a lap making up the final race of the day for the Thor MX1 class, for Ferris it wasn‰Ûªt over until he crossed the finish line.

By the four lap mark, the battle for fourth began to heat up, with Mosig beginning to feel the pressure from Waters, who was looking to redeem himself after a difficult first moto.

After ten minutes on track, Ferris looked more in control than ever before out in front, while Gibbs and Peters maintained their second and third place positions. Mosig continued to feel the pressure from Waters, while Metcalfe, Crawford and Clout all remained inside the top ten.

Unfortunately for Waters, a crash at the mid-way point of race two spelled a drop in positions for the Honda rider ‰ÛÒ Waters slipping from fifth to eighth and with a task ahead of him if he was to make his way back through the talented field.

Surprisingly, with only ten minutes until the last lap board was set to be displayed, there had been little to no change in positions, but the one rider who the entire crowd could not peel their eyes away from, was Ferris.

After 12 laps, behind the top three of Ferris, Gibbs and Peters, things started to get interesting. Both rookies Crawford and Clout had both passed their more experienced teammates and moved in to fifth and sixth positions, relegating Metcalfe and Waters back to seventh and eighth.

But with less than five minutes remaining, the crowd began to hold their breath, each and every individual fixated on the number one machine of Ferris who continued to charge towards his second consecutive title.

And when the last lap board was displayed for the final time, Ferris was well and truly in the box seat to clinch the Thor MX1 title, and when his CDR Yamaha machine crossed the line for the final time, he collected the moto two race victory and was finally crowned the 2017 Thor MX1 Champion.

Second place in race two went to Gibbs, while Peters recorded his second third place of the day in the final MX1 moto. Mosig, and Crawford completed the top five, followed by Clout, Styke, Long, Metcalfe and Waters who all finished race two inside the top ten.

But the man of the moment was Ferris at Toowoomba today, who not only went 1,1 but secured his second Thor MX1 championship. Second position on the Round 9 podium went to Gibbs, while Wilson Coolair Motul Factory Suzuki‰Ûªs Peters achieved his first podium of the year, finishing third.

‰ÛÏI only just got the championship last year, I went into the final round six points down, and I knew that I could do it but we had a lot of pressure on us,‰Û