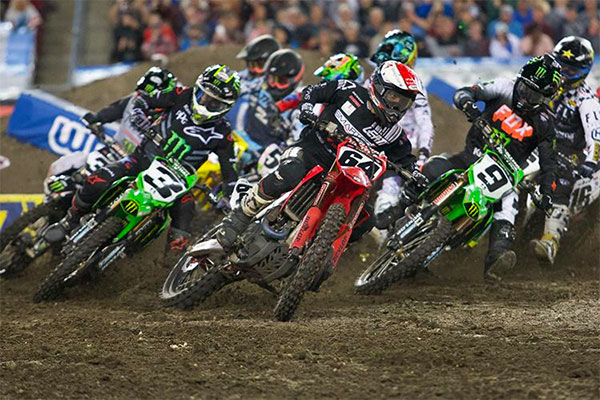 In an optimistic move Feld Entertainment will re-scheduled the entire 2020 Monster Energy AMA Supercross season until later in the year.

With the current Coronavirus pandemic closing all sports down Feld has cancelled all remaining rounds of the current schedule and will now to scheduled to complete rounds 11-17 later this year. This would could also be seen as an indicator that the AMA Motocross season will not go ahead in any shape or form.

The race locations and dates have not been finalised.

The following Supercross events have been cancelled:
March 14 in Indianapolis, IN at Lucas Oil Stadium
March 21 in Detroit, MI at Ford Field
March 28 in Seattle, WA at CenturyLink Field
April 4 in Denver, CO at Empower Field at Mile High
April 18 in Foxborough, MA at Gillette Stadium
April 25 in Las Vegas, NV Sam Boyd Stadium
May 2 in Salt Lake City, UT at Rice-Eccles Stadium