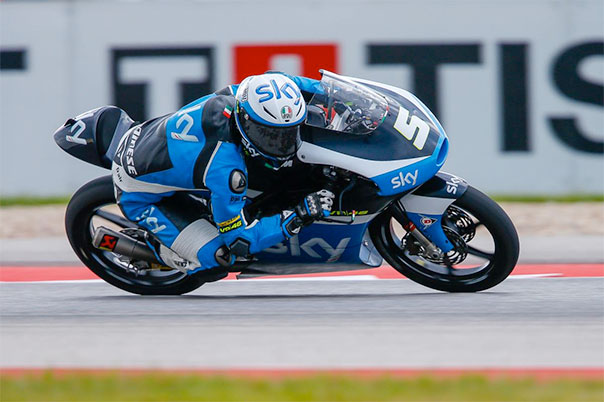 Romano Fenati made it three different winners in as many races as he cruised to victory ahead of Navarro and Binder at the third round of the Moto3 championship at the Circuit of the Americas.

The start of the Moto3 World Championship race was delayed due to an oil spillage down the back straight. Riders and teams calmly sat in the pits and waited for the oil to be cleared. Just 15 minutes after the scheduled start time, riders lined up on the grid, the sun shining down and burning off many of the clouds overhead. As is often the case, the entirety of the field opted for medium front and rear tyres.

For the first time in his career it was Philipp Oettl (Schedl GP Racing) who started from pole, but a near perfect start saw Jorge Navarro (Estrella Galicia 0,0) get the holeshot into Turn 1. The Spaniard immediately began to push, taking Oettl and Romano Fenati (Sky Racing Team VR46) with him through the opening corners.

Brad Binder (Red Bull KTM Ajo) started 12th and was up to sixth after just half a lap, Niccolo Antonelli (Ongetta-Rivacold) making similar progress further down the order. As the field crossed the line for the first time, Navarro would have a lead of over 0.7s as Fenati nipped up the inside of Oettl for second. The leading trio had a clear second advantage, Jakub Kornfeil (Drive M7 SIC Racing) heading the chasing group as they attempted to close the gap.

Fighting in the second group was fierce as the likes of Binder, Fabio Quartararo (Leopard Racing), Kornfeil and Enea Bastianini (Gresini Racing Moto3) all tussled for supremacy. All the while Navarro set successive fastest laps to extend his lead, but on the fourth lap Fenati upped his pace and began to close in, setting the first 2‰Ûª16 of the race which would soon be followed by Navarro‰Ûªs first 2‰Ûª16.

Although clear gaps of over a second would appear at the head of the race, riders in the leading five would continue to trade fastest sectors. As the seventh lap began, the gap between Navarro and Fenati dropped to under a second for the first time since the start of the race. With the leading two chasing each other and Binder and Quartararo dicing over fourth, Oettl was having a lonely race in third position, the German focusing on setting consistent times.

At the start of lap 8, Navarro made a mistake into Turn 1 and allowed Fenati to slide through with ease. Fenati tried to break away but Navarro rallied and attempted to close in on the KTM rider. But the gap would remain at around half a second for several laps, Fenati always able to respond when Navarro closed in.

Further down the order a number of battles continued to roar, Nicolo Bulega (Sky Racing Team VR46) muscling his way inside the top ten. Oettl‰Ûªs lonely Sunday ride came to an end with seven laps to go as he found himself followed by Quartararo and Binder, the French rider slipping through at Turn 1 with ease. The double CEV Champion wouldn‰Ûªt go unchallenged as Oettl continued to look up his inside at every chance he got.

Another mistake at Turn 1 on lap 12 from Navarro would cement Fenati‰Ûªs lead, the Italian opening a gap of over two seconds. The gap would continue to grow and the top two steps of the podium look set it stone. Quartararo continued to circulate in third, Oettl now half a second behind the French rider with five laps to go.

Having started from 30th, Qatar GP winner Niccolo Antonelli saw able to produce an incredible ride to get inside the top ten and battle with fellow Italian Enea Bastianini, who had started on the front row. Aron Canet (Estrella Galicia 0,0) would join the Italian pair for a spirited battle.

Disaster would strike with three laps to go for Fabio Quartararo, his KTM encountering a problem that saw him rapidly lose positions. This promoted Oettl back onto the podium and lifted Binder to fourth. Drama would continue as on the penultimate lap Antonelli slid off at Turn 5. Knowing a potential podium was now on the cards, Binder put it all on the line on the final lap to get past Oettl. The South African was clearly having front-end issues but continued to push ahead. A perfect slipstream allowed Binder to grab third position down the back straight, able to hold off the German to the line.

Fenati took his first race win since the French GP in 2015 as both Navarro and Binder returned to the podium. Binder leads the championship by three points, Navarro sits second with 49 points. Thanks to his win, Fenati moves to third with 38 points.

Phillip Oettl and Andrea Locatelli (Leopard Racing) would seal the top five in the race. Locatelli taking his second top five finish in as many races.

Hiroki Ono (Honda Team Asia) was given a ride through penalty for irresponsible riding and causing Adam Norrodin (Drive M7 SIC Racing Team) to crash the first corner on the second lap.

Jorge Martin (Aspar Mahindra Team Moto3) was also forced to retire after a fall at Turn 1, his bike in no state to continue. Czech rider Karel Hanika (Platinum Bay Real Estate) fell at Turn 16 late in the race. No riders sustained serious injuries.

Round 4 takes place on the 24th of April at the Gran Premio Red Bull de EspaÌ±a.