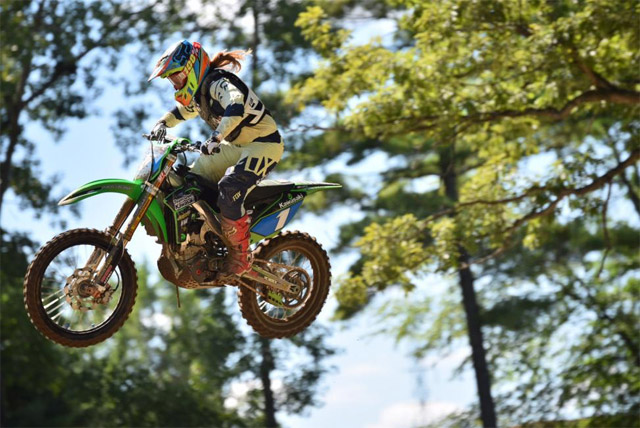 Kylie Fasnacht performed a flawless performance going 1-1 at the seventh round of the 2016 Women's Motocross Championship (WMX) this past weekend, September 3, at the Baja Brawl in Millington, Michigan.

This weekend marked her second race in a row and third time this season that the Florida native was able to dominate both motos. With the win, the Team Green Kawasaki rider extended her lead in the series standings to 36 points over her closest competition of Marissa Markelon, who was scored second overall (2-2) in Michigan. Kaitlyn Morrow once again found herself standing on the box at the conclusion of the grueling two motos where her 3-3 moto tally vaulted her to third overall.

Much like the previous race in Indiana, Fasnacht had to chase down Markelon in both motos in order to come out victorious. In Moto One, Fasnacht was fourth off the start and spent most of the race running down the Cycle Trader/Rock River Yamaha-mounted Markelon, finally making the pass with two laps to go on an uphill triple. Once in the lead, Fasnacht did a stellar job of dealing with lappers while keeping Markelon at bay to get the big win. Stone/Fly/Scott/Cycle Shack North Yamaha rider Kaitlyn Morrow was third, while Kawasaki-mounted Shelby Rolen and KTM's Eve Brodeur rounded out the top five.

Moto Two played out in much the same fashion as the first moto, with Markelon taking the early lead ahead of Morrow and Fasnacht. It took a couple of laps for Fasnacht to catch up with Markelon, who had managed to build a decent gap on the rest of the field.

"Kaitlyn was riding well and it took me a while to find a way around her," said Fasnacht. "Once I did I started tracking down Marissa and was able to make a last minute pass on the white flag lap."

Once Fasnacht caught Markelon, she was able to make the pass before the end of the moto, in what turned out to be one of the best races that fans and motocross enthusiast have witnessed this season between the two championship contenders. Markelon held tight for second with Morrow, Brodeur and Honda-mounted Bryce Martinez going third, fourth and fifth.

"It was a good race, Marissa and I had a good battle," said Fasnacht. "I kind of got tired toward the end of the second moto, but I kept pushing. It feels pretty good to get another win and I just want to keep doing what I'm doing. Getting another win takes some of the pressure off of me before the next race."

The WMX series travels to Englishtown, New Jersey on October 2 for the Kawasaki Race of Champions. The battle for the National Championship is set to continue during the eighth round of the season at Old Bridge Township Raceway Park.

TOp IMage: Kylie Fasnacht extended her points lead by taking the overall win in Michigan at the Baja Brawl.