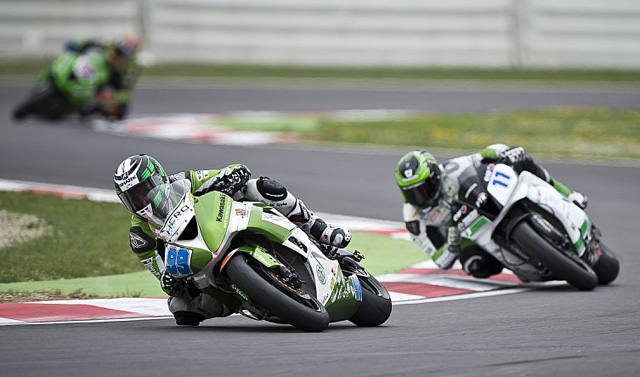 Fabien Foret secured the win at round 2 of the World Supersport Championship at Imola overnight despite pressure from behind in the final laps, making it two wins from two races in 2012 for the Ninja ZX-6R. 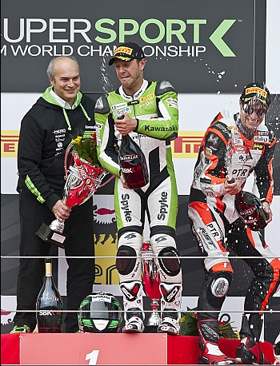 Fabien Foret
This was the Frenchman's 14th career win, his third for Kawasaki, the second Kawasaki win of 2012 after the Australian victory of Kenan Sofuoglu meaning Kawasaki is leading the manufacturers' championship by 14 points.

Britain Sam Lowes and his PTR team-mate Ronan Quarmby rounded out the podium.

"This is a good track for me, I love Italy and we have had a great start to the season," Foret enthused. "The team worked very hard for me and gave me an excellent bike. It has not been the easiest weekend and I was sixth in qualifying, but it ended very well for me, the team and all of us," the Intermoto Step Kawasaki rider concluded.

Pole position rider Sam Lowes tried everything he knew on the final few laps of the FIM Supersport World Championship race at Imola to get past Foret, but he could not get into a position to make his final move. In finishing second by only 0.574s Lowes promoted himself to second in the championship, on a day when lots of top names and new talents experienced some vastly differing results.

"That was a tough race. We changed the bike a bit for today and the team gave me a bike that as capable of winning," Lowes said.

"Fabien was great last year at this track and this year he did not put a foot wrong. I nearly matched his times towards the end, but I could not go any faster to catch him, but fair play to all of us, and I am glad to get my first podium of the year. I made a good start from pole and had to control the race from the front. Fabien is a fantastic rider and he's always good at this circuit so well done to him for the win.

"We're getting closer and I feel good and confident. I didn't make any mistakes in the race and the bike and tyres were working well until the end. We're now second in the championship so I'm really looking forward to Assen," the Bogdanka PTR Honda rider concluded. 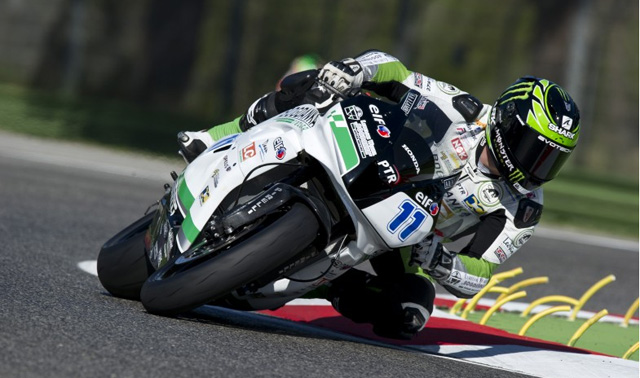 Runner up Sam Lowes
Third placed finisher Ronan Quarmby was ninth on lap one, having been 11th on the grid, but rode through with good pace to set-up a final lap struggle with Roberto Tamburini . Quarmby came out on top to record his first podium finish, but he only beat Tamburini by 0.004s after their dramatic exit from the final chicane.

"It is amazing to get third and I did not expect to get onto the podium from my starting position," Quarmby explained. "I pushed hard this weekend and I cannot say thank you enough to my team because the bike was good this weekend. What an amazing race day after getting on the podium."

Regular ftont runners, Kenan Sofuoglu and Brock Parkes finished out of the points. Sofuoglu was disqulified after custting the track, "They final disqualified me because I had made a mistake at the chicane," the former champion explained. "They say if you make this mistake you have to go straight on, stop in that point, then restart. But it was impossible as I was into the corner, so I could not go straight. I think it is not fair because I was in first position." 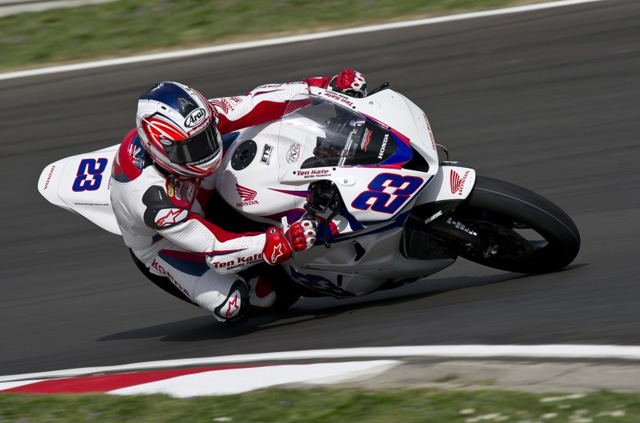 Tyre problems robbed Aussie Brok Parkes of any points at Imola
Australian Broc Parkes had high expectations of a podium finish after qualifying fifth, but he was forced in to change a rear tyre after only five laps. He went back out on track to set a new lap record of 1m, 51.952s, but lost so much time in the pits he finished 20th and out of the points.

"As soon as I went out directly the tyre had no grip at the start," Parkes explained. "I tried to regroup and about three laps the tyre started to go and about five laps in the tyre was just completely gone. We came into the pits and put on a new tyre. I made a new lap record and stayed in good lap times the whole way. There is nothing more we can do or say."