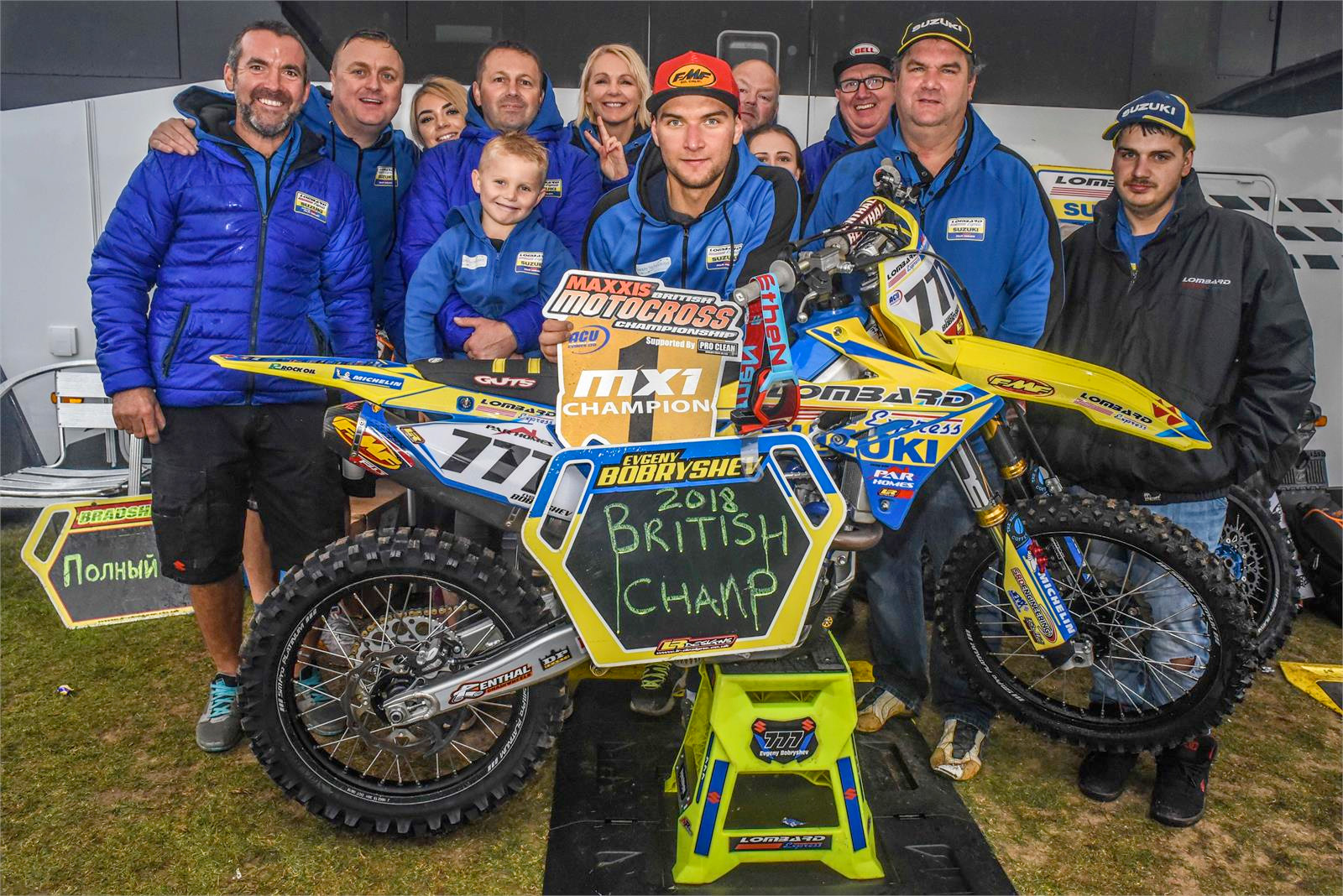 Evgeny Bobryshev and his championship winning team. Photo: Toofast Media Group
Evgeny Bobryshev raced his RM-Z450 to victory in the 2018 British Motocross Championship at a storm-lashed final round at Cadders Hill Circuit near Lyng in Norfolk, UK at the weekend.

The Russian ‰Û÷Lombard Express with Par Homes‰Ûª Suzuki rider had it all to play for at the round ‰ÛÒ originally the opening round, but postponed because of bad weather conditions. But this weekend, many parts of the UK were battered by ‰Û÷Storm Callum‰Ûª ‰ÛÒ the season-decider included, ramping-up the tensions as the championship battles came to a head.

After a disastrous day at Hawkstone Park in August, Bobryshev‰Ûªs title hopes took a big hit; and then when the penultimate round of the series was cancelled a few weekends later, it looked as though the championship was over for the Russian, the 39-point deficit between ‰Û÷Bobby and series leader Jake Nicholls difficult to claw-back in the two remaining motos.

But with Nicholls unable to race the final event because of injury, Bobryshev knew that he needed two third place finishes to earn the 40 points to wrap-up his second British title.

In the first moto, he took a second, then knew he would need fourth in the second, as conditions got worse: Strong winds and persistent rain made conditions tough for the MX1 riders as the gates dropped for their final moto of the year.

Bobryshev got another good start and was third on the opening lap, then taking the lead. However, after losing this, he kept his cool and kept the gap back to third behind him comfortable to cross the line for his second British motocross Championship title.

"We got the title! It‰Ûªs been a difficult year racing over here, we didn‰Ûªt have much luck at times, but unfortunately, Jake got injured and we got our chance to try and get the title," Bobryshev said. "I was stressed before the race, it‰Ûªs been eight years since I had a title and today we were in the position again. I‰Ûªm super pumped and so happy for the team; they deserved this. I just want to say a huge thanks to the team and all the sponsors that supported us through the season. It‰Ûªs time to celebrate now!‰Ûª‰Ûª

Team Manager Neil Prince was relived to take the title after a difficult year.

"I feel so relived. This year has been difficult for Bobby, he really hasn‰Ûªt had much luck," Prince said. "What happened to Jake is very unfortunate, we didn‰Ûªt really want to come here in this position, but we had to. The cameras and the videos show that Bobby has been up there this year, he‰Ûªs been winning races and shown great speed, but he‰Ûªs also crashed a lot.

"If we‰Ûªve done eight races, he‰Ûªs crashed in six of them, and they‰Ûªve been big crashes: At Hawkstone he had three really big crashes where he could‰Ûªve pulled out, but he just kept on going. Like I said we haven‰Ûªt had much luck in 2018 but today it came our way, and we‰Ûªll take it. We‰Ûªve been there every weekend and Bobby has picked the bike up every time after some big crashes. It‰Ûªs been a big team effort from everyone, from Andy at Lombard and me to all the sponsors we have, from Suzuki UK, Meredith motorcycles, Paul Rowlands at PAR, SC Sports Homes and everyone else. Without all those people this couldn‰Ûªt happen.

"Bobby had to execute a solid day today, and he did that. He earned the championship today. I‰Ûªve been close to crying all day because I haven‰Ûªt been in this position for so long. It feels great to have the whole family and all our sponsors here, I can‰Ûªt thank everybody enough for making this possible." 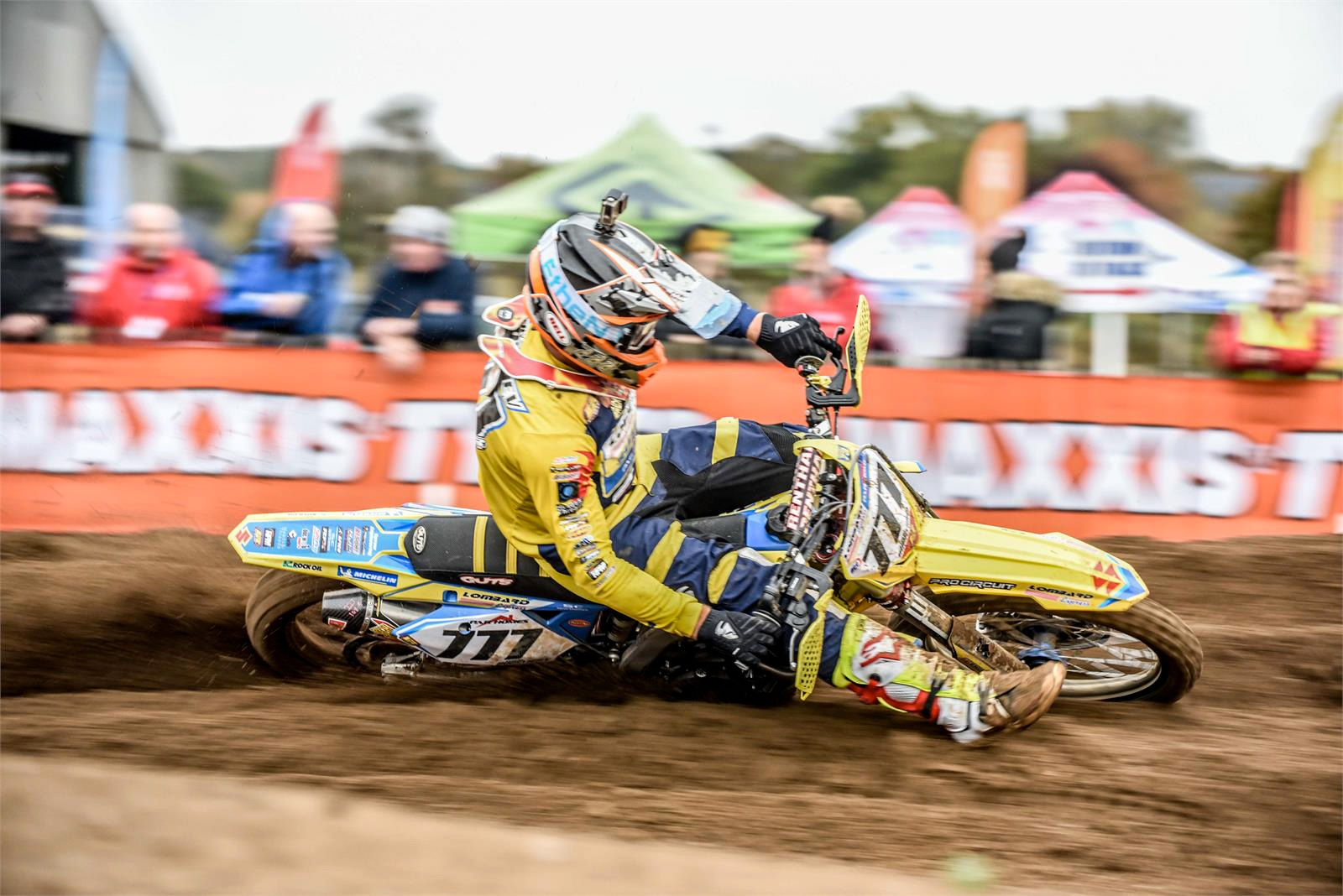 With leader Jake Nicholls unable to race the final event because of injury, Bobryshev knew that he needed two third place finishes to earn the 40 points to wrap-up his second British title. Photo: Toofast Media