Everything going to plan for Ken Roczen 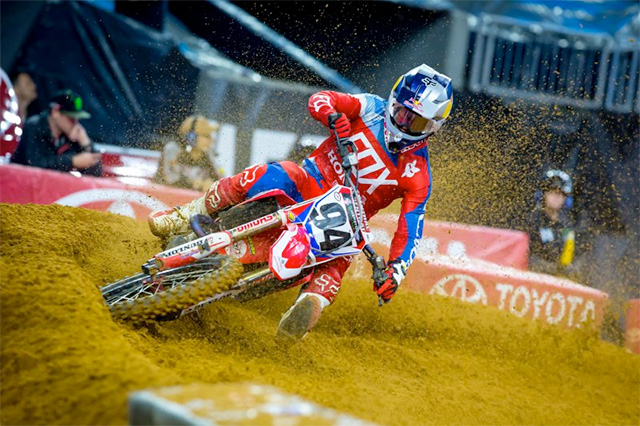 Round 2 of the AMA Supercross series, held at Houston‰Ûªs NRG Stadium, was an exciting one for Team Honda HRC, as Ken Roczen put together an impressive ride, leading much of the main event and finishing second in only his second race back after nearly a year off due to injury.

When the gate dropped, the German launched his CRF450R to an upfront start, taking over the lead on lap two. On lap 14, Roczen relinquished the lead but rode smoothly and prudently to take the checkered flag in second place after laying down the quickest lap of the race with a 53.552.

‰ÛÏThis was a good weekend for us. I‰Ûªm really stoked to be able to deliver a podium to the team in only our second race back," Roczen enthused.

"I would‰Ûªve loved to win it obviously, but Jason [Anderson] was going good all day so I wasn‰Ûªt going to just send it and do something stupid. I had two good starts in the heat and main event and just tried to ride smart in both. I had some good battles with Justin [Barcia] and Jason; it was clean and fun. We‰Ûªre moving in the right direction. It‰Ûªs only the second round and everything is going how we planned. I don‰Ûªt think there‰Ûªs much more we could ask for.‰Û 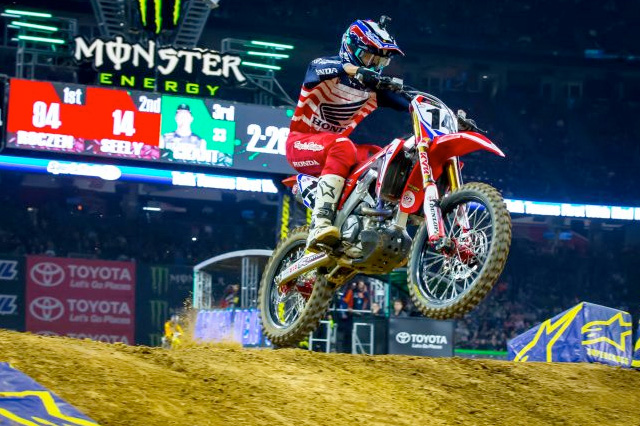 Cole Seely just missed the podium with 4th
Roczen's Teammate Cole Seely also had a noteworthy night, improving on his result from Anaheim to score fourth place. Following a top-five start, Seely quickly moved into fourth, then engaged in a heated battle before taking over third. It looked as though the Californian may join his teammate on the podium, but after eight laps he fell back to fourth, which is where he finished.

‰ÛÏI‰Ûªm frustrated with tonight because Justin [Barcia] shouldn‰Ûªt have gotten back by me, but overall fourth is still good," Seeley said, "Other riders had much worse nights than I did so I can‰Ûªt really complain. I had a hard time getting back into my flow and hitting my lines after he got back by me. We‰Ûªre still making progress and I‰Ûªm happy about that; I just want to get on the podium where I belong. and tonight I was so close.‰Û