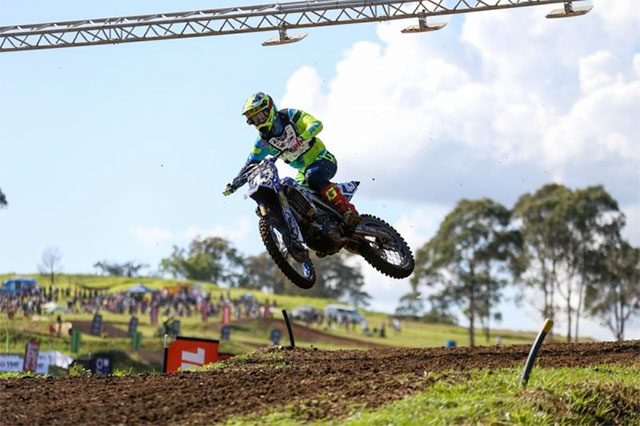 Appin turned it on for thousands of spectators in New South Wales today, with Serco Yamaha‰Ûªs Mitchell Evans impressing in both Motul MX2 motos to collect a maiden overall win at Round 2 of the Motul MX Nationals.

With plenty of championship points up for grabs at Appin, Evans capitalised on the opportunity, on what was one of the most technically challenging Appin circuits the series has seen in years.

This morning it was round one winner DPH Motorsport‰Ûªs Wilson Todd who set up his day perfectly, setting the fastest time in qualifying (1:44.590) while behind him Serco Yamaha team mates Evans (1:44.646) and Jackson Richardson (1:45.567) completed the top three times qualifying times. But when racing got underway it was a calm and calculated Evans who showed impressive and mature form.

The Motul MX2 class were the first category to take to the track at Appin, and in a stark contrast to previous years, the track was rutted all the way from one side to the other after only this morning‰Ûªs qualifying sessions. When gates dropped, Serco Yamaha duo Evans and Richardson shot out into the top two positions, followed by KTM two-stroke rider Egan Mastin (Davey Motorsports) and red plate holder Todd. By only the second lap, Richardson made up significant ground on his teammate, and managed to secure a pass for the lead as riders headed in to lap three.

But Richardson‰Ûªs lead was somewhat short lived ‰ÛÒ KTM mounted Mastin who was the fastest man on track by lap three, accelerated from third and passed both Evans and Richardson to snatch up the top spot. However, Evans retaliated and within half a lap blew past Mastin to reclaim the lead position.

Richardson then continued to fall victim to his competitors, with DPH Motorsport‰Ûªs Todd making his way up to third relegating his fellow Yamaha rider Richardson to fourth.

By the halfway point in moto one, the running order saw Evans continuing to maintain the race lead from Mastin, Todd, and Richardson, while behind the top four, privateer Richie Evans occupied fifth position ahead of Kiwi Hamish Harwood and CRF Honda Racing‰Ûªs Kyle Webster.

After 20 minutes on track, Evans had well and truly settled in to the top spot and looked super comfortable controlling the race ‰ÛÒ and with six laps remaining, was the fastest rider on the circuit.

When the chequered flag flew on the first 30-minute moto it was Serco Yamaha‰Ûªs Evans who collected a maiden Motul MX2 race victory, ahead of Mastin and Todd who crossed the line in second and third respectively. Richardson held on to finish in fourth ahead of New Zealander Hamish Harwood in fifth. Webster, Richie Evans, Ricky Latimer, Synep Racing‰Ûªs Dylan Wills and Joel Evans all completed the top ten in moto one.

With the MX2 championship tightening up after the opening moto at Appin, when race two kicked off it was an all out battle for points. When the gate dropped for the second time it was Todd who took the Raceline holeshot, but Richardson was not letting the Yamaha rider out of his sights.

After only a single lap, Northern Queenslander Richardson made the pass on Todd for the lead, where he stretched out the gap to a healthy couple of seconds after only a few turns. Race one winner Evans also joined in on the battle for the top spot, tagging on to the rear end of Todd, providing spectators with a three-way battle for the lead.

Behind the top three, Mastin spearheaded his own fight for positions, with Aaron Tanti, and Wills all within striking distance of the fourth placed rider. But it was heading in to lap three that the brutality of the Appin circuit became realised ‰ÛÒ Richardson getting caught in a rut and slipping from first to third within seconds, allowing Todd to inherit the lead position.

With only 20 minutes on the clock in the second moto, by the half way point, riders had settled in to their race positions. Todd continuing to lead the way from Evans, and Richardson, while Mastin managed to hold off Tanti, Wills and Harwood in fifth, sixth and seventh places.

By the time MX2 competitors received the last lap board, the leaders were well and truly into lapped traffic, and to the surprise of the crowd it was Serco Yamaha‰Ûªs Evans who led the way in to the final lap after inheriting the top spot thanks to a mistake from Todd.

Despite a challenge from Todd to reclaim the race lead in the final few turns, it was Evans who crossed the finish line with a perfect score card. Todd was forced to settle for second place in race two, followed by Richardson who finished in third. Mastin wrapped up race two in fourth followed by Tanti, Wills, Harwood, Rykers, Latimer and Evans who completed the top ten.

With 1,1 moto finishes however it was Evans who had reason to celebrate at the conclusion of today, taking his first ever Motul MX2 round win at Appin. Second overall was taken by Todd while Mastin rounded out the MX2 podium.

‰ÛÏIt was pretty much a perfect day for me here at Appin, I couldn‰Ûªt really be happier with how I rode and how my starts were today,‰Û