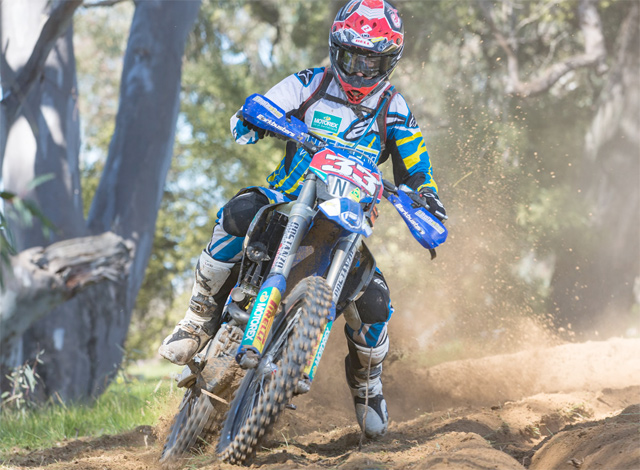 Husaberg Enduro Racing Team rider Geoff Braico has put the finishing touches to the final season of Husaberg as a factory-backed entity in Australian off-road motorcycle racing, at the weekend‰Ûªs Australian Off-Road Championship finale at Heathcote, in Central Victoria.

Braico became the sole flag-bearer of the distributor-backed team in Husaberg's final AORC after Husaberg teammate Jarrod Bewley withdrew before the event due to a shoulder injury.

With the re-unification of Husqvarna and Husaberg, 2014 was the 25th and final year for new Husaberg models, and Braico‰Ûªs Husaberg FE 350 was in fact the very last to leave the warehouse in Western Australia.

He showcased the brand prominently one last time on Saturday afternoon when he posted the fourth fastest overall time on his way to ninth overall, but he finished 12th today after a couple of early crashes.

Braico finished the Australian Off-Road Championship in 10th place outright, with teammate Jarrod Bewley and his FE501 taking 11th spot despite being unable to face the starter at Heathcote.

Braico was also seventh in the Premier E2 class, with a best result of third in the third round of the series in Queensland, while Bewley finished third in the E3 class.

‰ÛÏMy weekend wasn‰Ûªt too bad, I got ninth overall yesterday and did the fourth-fastest lap time which was pretty cool." Braico stated. "Today I crashed twice in slippery conditions this morning and it just sort of ruined any chance of a top-10 so I didn‰Ûªt get to give the ‰Û÷Berg quite the send-off that I wanted to, but we showed some promise.

"I want to say a big thanks to Jeff Leisk and everybody involved in the Husaberg Team for the fantastic support in the last four or five years, they put a huge amount of faith in me so I can't thank them enough.

"Also a huge thanks to Drew for all his help; he's gone above and beyond what I expected this year so that's fantastic. It's been a great period, and it‰Ûªs a little sad to see it come to an end, but it was great to be a part of.‰Û